If All Remakes Were as Good as Magnificent Seven, We'd Really Love Remakes

Reviews of the "Magnificent Seven" remake and "Storks," plus local movie news and notes. 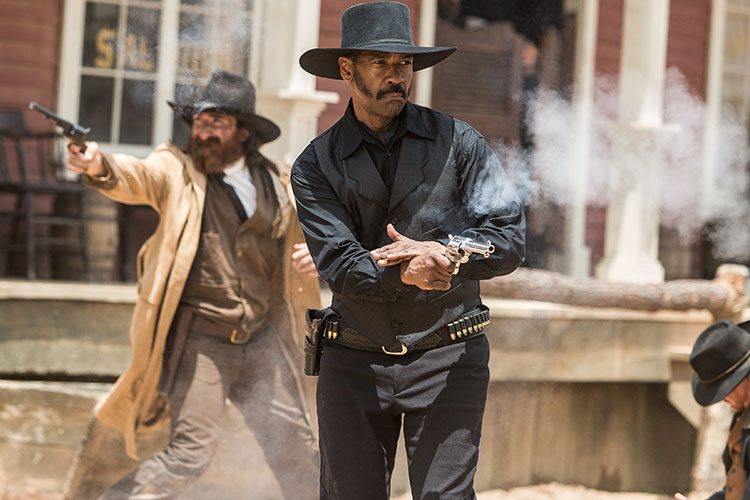 There are plenty of common complaints about the proliferation of remakes and franchise pictures in modern Hollywood; some are legitimate, some are flimsy. But among remakes worth griping over, there’s really no reason to complain about another “Magnificent Seven.”

The original is now more than 50 years old, more than enough time to revisit the theme (although several lower-profile reboots have occurred in the interim). It’s not the sort of film that will frequently show up on cable or in-theater repertory screenings, so younger audiences may have had little cause to revisit it. And — let us not forget, those who decry the remake — the 1960 version is itself a remake, of Akira Kurosawa’s “Seven Samurai.”

So a loving and respectful re-imagining, under the guidance of director Antoine Fuqua (“Training Day,” last year’s “Southpaw”) and writers Nic Pizzolatto (“True Detective”) and Richard Wenk (“The Mechanic”) is, in my book, welcome. But is it worthy?

From behind the camera, it certainly is. Fuqua’s direction and the positively gorgeous cinematography by Mauro Fiore would provide for a rapturous experience even if you shut the sound off; the weighty and dramatic images of western landscapes captured here rival those of the classic westerns that Fuqua and Fiore clearly have an admiration for.

In its cast, too, this “Seven” keeps up with the original. The roles change enough that most of these gunslingers don’t have a direct counterpart in the original film (other than Denzel Washington, who is very much in the Yul Brynner role — and his getup). This posse — Washington, Chris Pratt, Ethan Hawke, Vincent D’Onofrio, Byung-hun Lee, Manuel Garcia-Rulfo and Martin Sensmeier — each perform as if their character is the lead, with white-knuckle intensity and reckless abandon. Pratt, particularly, continues to prove himself among the most reliable leading men in Hollywood.

There’s good and bad in the script, which is elegantly structured and great in terms of character development. It reaches a bit far, though, in upping the stakes on the original tale; without getting too far into the blow-by-blow, this “Magnificent Seven” is no simple tale of good guys and bad guys. That just doesn’t fly anymore, apparently; no, there have to be much broader societal and personal implications behind conflict in 2016.

And yet, having rewatched the original film earlier this week, I felt that the classic had more to say — more relevant, current commentary — than the new one. I’m not sure if that’s by design, to make a more palatable popcorn entertainment, or by accident, with the message in this “Seven” hovering a bit farther below the surface, but I was surprised at the distinction.

Those are fairly minor points, though; “Magnificent Seven” is a thrilling and artful entertainment and is among the year’s best films. It is no mere curiosity for western aficionados, either; this is simply a very good movie, and it should be the film of choice for anyone buying a ticket this weekend.

I’m certain that I watched an animated film called “Storks” last weekend, but it was just so damn forgettable that it doesn’t feel like it ever actually happened. I mean, I had a really vivid dream last night where I was fighting zoo animals in a rural area, and I could probably tell you more about that dream right now than I can recall about “Storks.” I do remember an unwitting alliance of an ambitious stork voiced by Andy Samberg and a hapless human voiced by Katie Crown, working to deliver a baby to a busy family. I remember occasional laughs, mostly produced by Samberg’s performance, and half-hearted vocal work from the likes of Kelsey Grammer and Jennifer Aniston. There was a good bit with a pack of wolves (all voiced by Keegan-Michael Key and Jordan Peele). I remember having somewhat troubling unanswered questions regarding the reproductive process in a world in which storks deliver babies. And I remember leaving the theater noting that, unlike the majority of animated fare in 2016, this one simply didn’t have much to say. In any case, if you find yourself looking at “Storks” anytime soon, it’ll pass the time and accomplish very little besides. I’ll tell you, though, this dream I had last night was messed up.

The Montage: The Silk Screen Film Festival continues through this Sunday; in my experience, this is a group that never picks a bad film, so don’t worry about finding a gem on the schedule. They’re all strong. Pick a movie and go … Coincidentally, it’s also Kung Fu Cinema week at Row House Cinema. The Lawrenceville theater is showing four ’60s and ’70s classics of the genre: “A Touch of Zen,” “Dragon Inn,” “Snake in the Eagle’s Shadow” and Bruce Lee in “The Way of the Dragon” … Ron Howard’s documentary about the Beatles’ first U.S. tour, “Eight Days a Week,” plays this week at the Hollywood Theater with a special bonus — footage of the band’s legendary 1965 performance at Shea Stadium. Click here for details and showtimes.