Hungry for Something Good, Pittsburgh? Where We're Eating in June

We're obsessed with Greekfreez vegan frozen treats, taking a first look at the new menu at Independent Brewing Company and traveling to The Tavern on the Square. Plus, we talk to Poulet Bleu pastry chef James D. Wroblewski II. 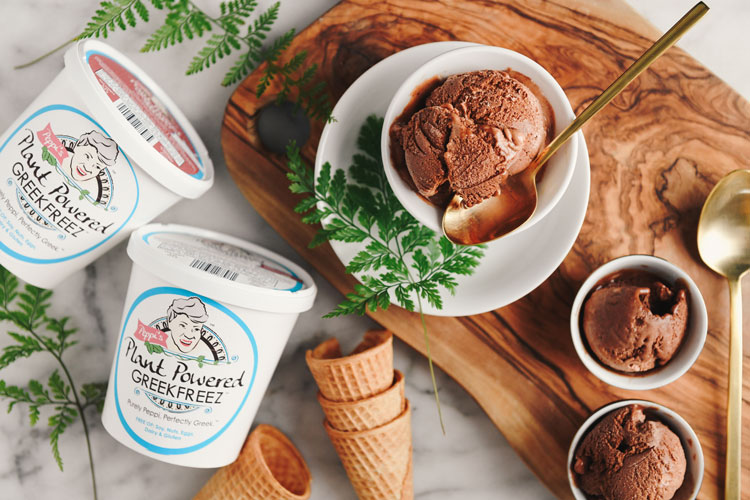 Greekfreez
More than a decade ago, Mike Smalis left the financial industry to take over his late mother’s
The Greek Gourmet Marketplace in Squirrel Hill. He learned that the cans of chickpeas he uses for his signature product, Peppi’s Greek Gourmet hummus, contain an unusual, but usable byproduct — viscous water. Then, last year, Smalis realized he could whip it into a meringue-like substance called
aquafaba. Now, it’s become the base for his ridiculously tasty frozen dessert, Greekfreez, an airy, creamy and 100-percent vegan treat that’ll have everyone, dairy-avoidant and otherwise, buzzing with delight.
Squirrel Hill, 2130 Murray Ave; 412/422-2998, facebook.com/the-greek-gourmet-marketplace
​ 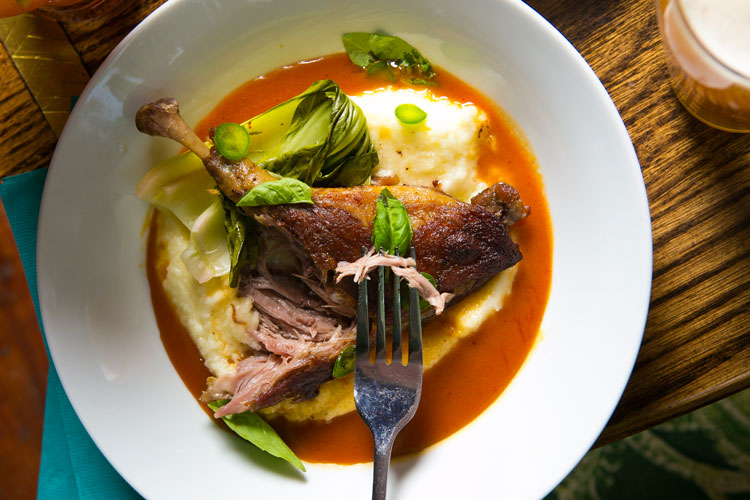 Independent Brewing Company
Jamilka Borges, Pittsburgh Magazine’s Chef of the Year, took command of the kitchen of Independent Brewing Company (as well as the adjoining tiki paradise, Hidden Harbor) in March. In her first few months as executive chef, she’s raised the tavern’s culinary bar to match wits with the establishment’s stellar beer list. Begin your meal with something light — grilled romaine, lightly dressed in Caesar and accompanied by Pecorino, avocado and croutons, is an adventure in texture. Duck leg confit, rendered crispy and beautifully balanced with sweetness, spiciness and richness with orange, chili and basil, is my favorite dish thus far. I’d like to see Borges and company continue to move in this direction of serving refined gastropub food that's not too fussy and heightened but way better than I can get elsewhere. 1704-06 Shady Ave., Squirrel Hill; 412/422-5040, independentpgh.com 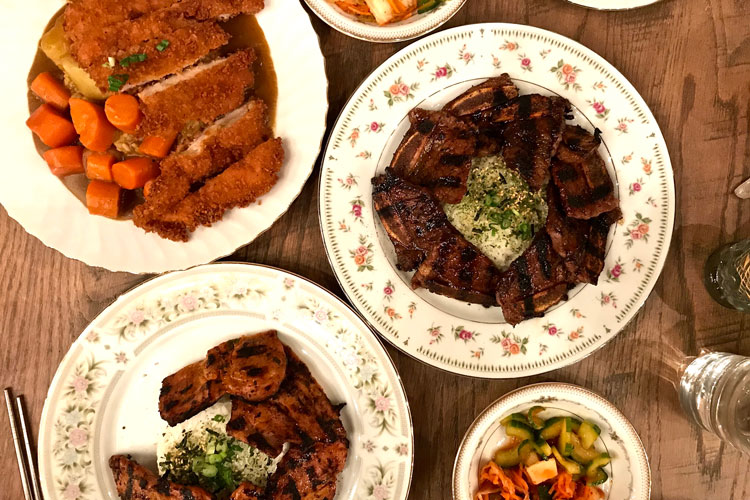 Soju
Simon Chough’s Garfield restaurant, Soju, was six years in the making. He taps into his Korean heritage — and his grandmother’s recipes — to prepare a delightful selection of dishes. There are the Korean barbecue staples such as kalbi and bulgogi in which Chough hits a fine blend of char and sweetness in his preparation. Homestyle dishes, including the Japanese-influenced chicken katsu curry, are comforting and I appreciate Chough’s attention-to-detail in preparing the rice. Soju also has a strong bar program which features cocktails made with … wait for it … soju, Korea's most popular spirit.
Garfield: 4923 Penn Ave.; 412/956-7699, facebook.com/sojupgh 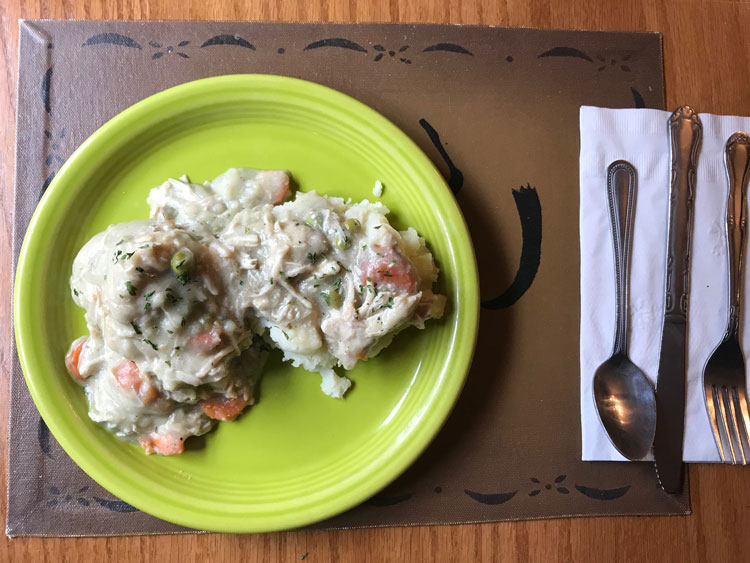 The Tavern on the Square
I stopped by The Tavern on the Square before my visit to Fallen Aspen Farm (see p. 128) and was utterly charmed by the historic restaurant. The renovated house was built in 1849 and served as a stop on the Underground Railroad — check out the pass-through on the third stair in the main dining room — and was turned into a fine-dining restaurant by Ernst and Cora Durrast in 1931. Now, it’s a comfortable tavern featuring stick-to-your-ribs dishes such as chicken and dumplings, ham loaf and house-made pierogi. The real highlight — aside from the warm service — are the sticky buns: yeasty, buttery, sweet treats based on Cora Durrast’s original recipe.
New Wilmington: 108 N. Market St.; 724/946-2020, tavernonthesquarerestaurant.com 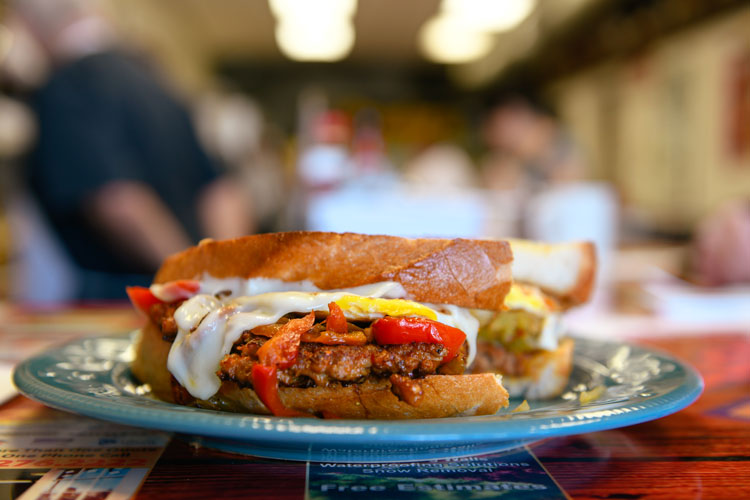 Gab & Eat
Susan Smith and Karie Goedert’s Carnegie diner, has decades of history, Pittsburgh’s best lunch counter hamburger, treat-you-like-a-neighbor service and more. The restaurant’s cooks smash a half-pound of Angus beef on red-hot flat-top griddle, a perfect creation that’s lacy and crispy on the edges while tender and juicy in the middle. There is a solid selection of sandwiches — the John Boy (hot Italian sausage, egg, cheese, peppers and onions on Italian bread toast) is one of my favorites — and outstanding, attentively prepared breakfast offerings. 1703 Washington Ave., Carnegie; 412/276-8808, gabneat.com 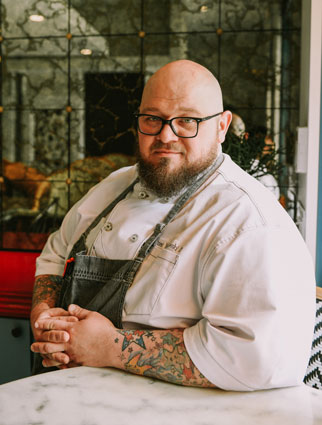 James D. Wroblewski II
Pastry Chef | Poulet Bleu
Wroblewski, 39, started his restaurant career at Casbah in Shadyside but left Pittsburgh to pursue work in Virginia at The Homestead. He made a mark in Las Vegas with jobs at the Ritz-Carlton, Red Rock Casino and Caesars Palace, then with Ritz-Carlton properties in Dallas and Arizona. Wroblewski moved back to Pittsburgh in 2011 to run the pastry kitchen at the Fairmont Pittsburgh Downtown and joined Poulet Bleu upon its opening in February.

What are the challenges of being a pastry chef?
One of the main challenges is working with your environment. Humidity, temperatures and working with all of that. It’s a direct challenge because it’s variable and so you’re always adjusting to what’s going on around you.

Where do you find your inspiration?
Poulet Bleu is pretty classic, so I stick closer to the classics here. I worked at hotels for so long and in [those] other places I pulled in refined flavors and classic techniques I’ve learned with childhood memories to get your soul moving a little bit.

What has you going right now?
[Now that winter is over] I want to move into lighter desserts. I want to do something with Rainier cherries, a lemon- or passion fruit-raspberry tart, and maybe adding a second souffle with Grand Marnier. I’m also interested in a very classic approach to a chocolate mousse, something that shows off how simple and beautiful it is.