Hungry for Something Good, Pittsburgh? Where We're Eating in December.

We're celebrating a decade of Dinette, tempted by hot pitas at Pitaland and digging the (not so) secret sauce at Salem's Market & Grill. 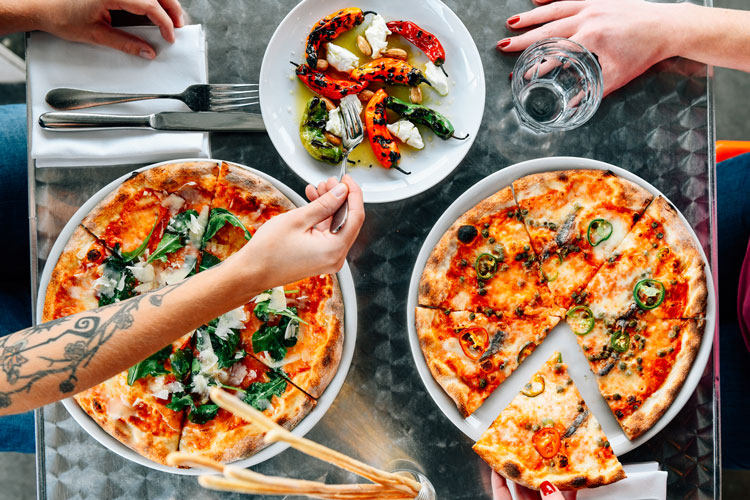 A Decade of Dinette
When chef/owner Sonja J Finn opened Dinette in 2008, Pittsburgh’s restaurant landscape was strikingly different. Potatoes and onions were the only options for local-in-winter ingredients and regionally grown asparagus was hard to come by in the springtime. “Small plates” weren’t a thing, and most Pittsburgh diners weren’t yet looking beyond the traditional. “I was putting farro in salad, and people were like, ‘Why are you serving me oats?’ and ‘This woman is just putting peppers and cheese on a plate,’” was some of the feedback Finn says she received early on.

Finn moved the needle with her East Liberty restaurant. With a slow, patient arc (and a rooftop garden) the chef helped introduce the city to sharable, chef-driven cuisine in a casual environment. She was the first woman solo chef-owner in Pittsburgh’s modern era and, she believes, was the first restaurant in town with an open kitchen. “The point of Dinette was to say a restaurant could be done in a better way. One that supports its workers and its community and has a positive impact. There were a lot of naysayers, but now you can’t say it doesn’t work,” Finn says.

Finn also is a leader in workplace dignity. She runs a kitchen where positive feedback trumps the brigade system, pays her employees a living wage and provides healthcare, and serves as a mentor to others. The list of Pittsburgh culinary professionals who passed through Dinette is a strong one and includes Becca Hegarty (Bitter Ends Garden & Luncheonette), Jamilka Borges (Independent Brewing Co., Hidden Harbor, Lorelei), Jeanette Harris (Gluten Free Goat), Jeff Ryan and Matt Watson (Pizza Boat), Robert Stockard (Pear and the Pickle) and Yelena Barnhouse (Lola Bistro). “Dinette is not just this singular entity. The entrepreneurial spirit runs deep,” she says.

Ten years in, the basic format is the same, yet the quality of ingredients and attention-to-detail always improves. On a recent Saturday night, the dining room was packed at 9 p.m., with diners enjoying dishes such as grilled hakurei turnips and radishes with lemon vinaigrette, red quinoa salad with roasted Nantes carrots, medjool dates, scallions, arugula and coriander vinaigrette, plus pizzas topped with intelligently curated combinations of ingredients; the Crispin apple with peppered bacon, red onion, rooftop-grown rosemary, gorgonzola and fresh mozzarella was a standout.

Finn says the future holds new challenges — primarily competition from easy-eating options such as delivery services such as Postmates and DoorDash, as well as ever-expanding fast-casual and counter-service concepts. “I think what I’d like to prove now is that this type of restaurant is still needed. Human interaction is still needed. If it’s a good restaurant, with purpose, that’s what survives.” 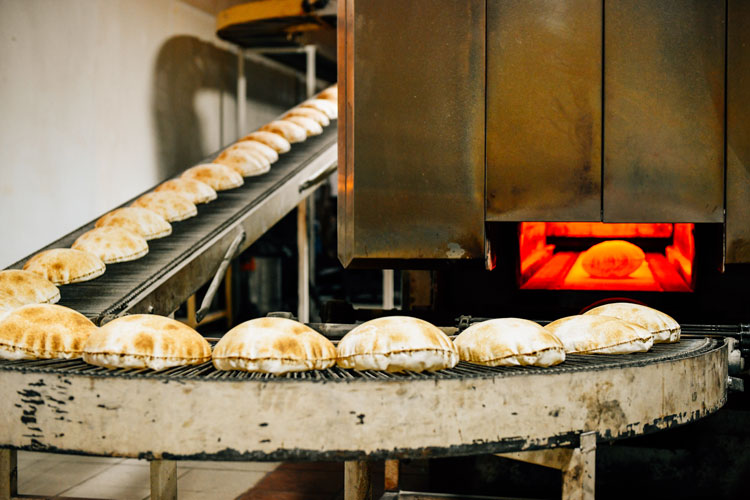 Pitaland
If you’re lucky, you’ll catch the oven at Pitaland in action, its conveyor belt a parade of thousands of freshly baked pita puffed with hot air and flush with the temptation of gluttony. George Chahine opened the Brookline bakery in 1969. The current owners, Joe and Jocelyne Chahine, natives of Lebanon who sought asylum in the United States, joined the business in 1974 and bought it from George (Joe’s brother) in the 1980s; they remodeled the store in 2013. In addition to picking up bags of the freshly baked pita, I recommend visiting the establishment for its café menu (especially the rosemary-and-garlic-kissed lamb burger) as well as the small grocery, which has bulk selections of bulger, beans, lentil and other pulses, jars of pickled items such as turnips, eggplant and mango, and a selection of Syrian, Armenian, Bulgarian and other specialty cheeses.
620 Brookline Blvd., Brookline; 412/531-5040, pitaland.com 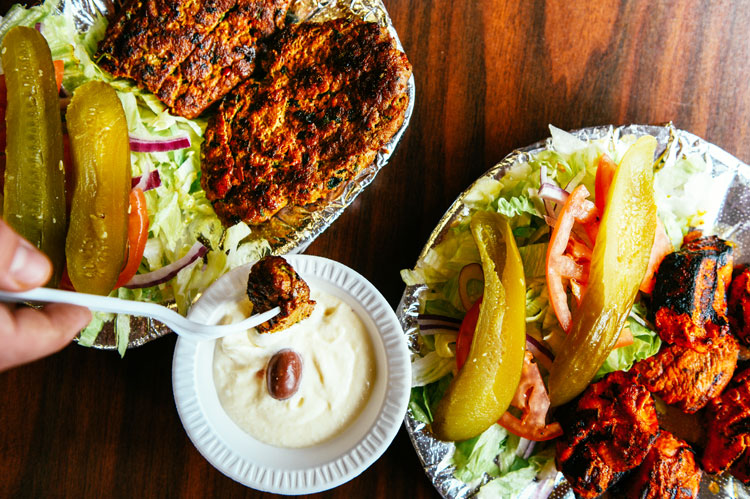 Salem’s Market and Grill
I don’t know what took me so long to dip my kufta kebabs and shish tawook skewers in the garlic sauce at Salem’s Market and Grill. The halal restaurant long has been one of my go-to destinations. I love the tasty and affordable hot-bar sections, particularly the lamb and goat curries; I find comfort in the naan, fresh and airy from the tandoor; and Salem’s spirit of radical inclusivity is something we could use a lot more of during a turbulent moment in history. Now, I add a lacing of the sauce, pungent garlic tamed by creamy mayonnaise, to nearly everything I order from the grill and crave meals from the establishment even more than I did in the past.
2923 Penn Ave., Strip District; 412/235-7828, salemsmarketgrill.com 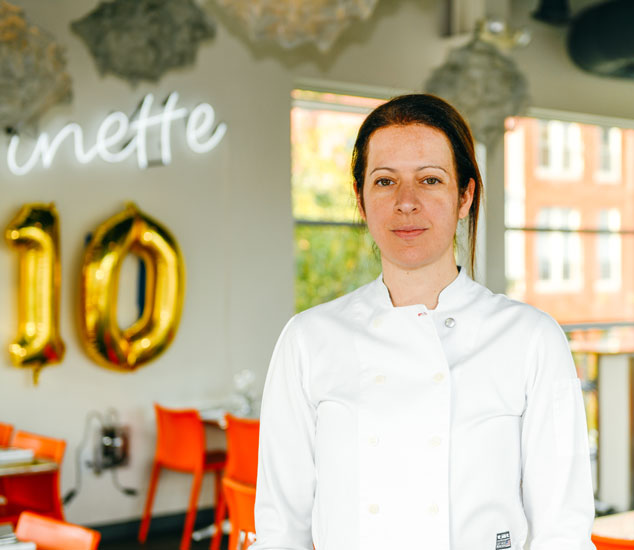 Do you cook at home? What do you like to cook?
I do. I just finally, nine years into owning my home, redid the kitchen. People think that I’m focused on pizza because of the restaurant, but I’m a chef. In the summer, for example, I’m using ingredients from the garden with good olive oil and fresh herbs. It’s kind of funny, but I’m also queen of the pasta bake. Chicken pasta bake, eggplant pasta bake. It’s one of those things that makes everybody happy at home. You can make it in bulk and freeze it, which is great as a working parent.

Favorite spot for a before or after work meal or drink?
Our family tradition is Chaya. We end up there a lot. Udipi is another place we always try to make it to. I know this might be self-promoting, but I can’t tell you how much pleasure I have eating at the Cafe Carnegie (where Finn is the consulting chef). That’s where I’m going with [my son] Miles.

What Pittsburgh restaurant would you work at for a day or two?
I never think about another job (laughs). But I’d say I’d love to go over to Five Points and make baguettes with them. I’d head over to the Golden Pig because I feel like her (owner/cook Yong Kwon) butchery skills with chicken are so impressive.

This article appears in the December 2018 issue of Pittsburgh Magazine.
Categories: Eat + Drink Features, From the Magazine