How This Bride Planned a ‘How I Met Your Mother’ Wedding

See how one couple used their favorite TV show to create a fantastic themed wedding. 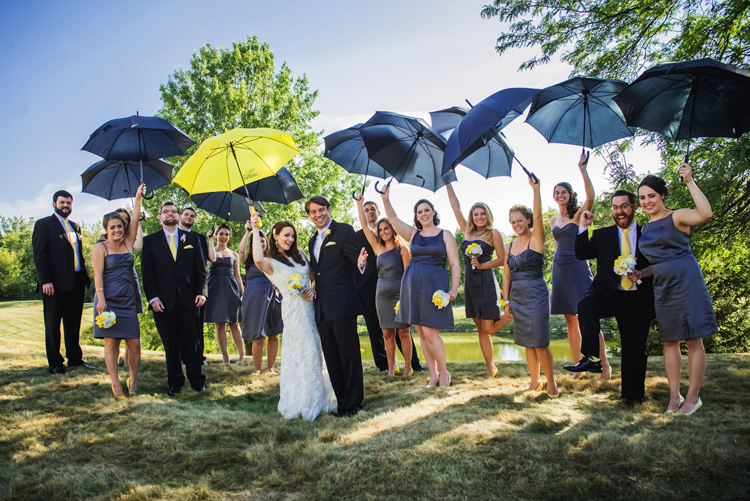 Sometimes you have to be in the right place at the right time to meet your perfect person. For Jordan Hinds and Megan Eaton, that place and time was the wedding of Jordan’s sister in Florida, back in June 2011. At the time, Megan was living in Albany, N.Y., and Jordan was living in Pittsburgh. They doubt their paths would have crossed if they hadn’t both attended this wedding.

“They always talk about being in the right place at the right time,” Megan says of her favorite TV show, “How I Met Your Mother.” “It’s that perfect moment when you find someone you never would have found otherwise.”

After his sister’s wedding, Jordan and Megan began dating long-distance, and “How I Met Your Mother” became a way for them to connect across the miles. “If one of us had a favorite show [on TV], the other one could watch it, and it would give us something we could do at the same time,” explains Megan.

Jordan had viewed the show casually before he met Megan, but it quickly grew into something they watched together every Monday night, even after she moved to Pittsburgh to be with him. 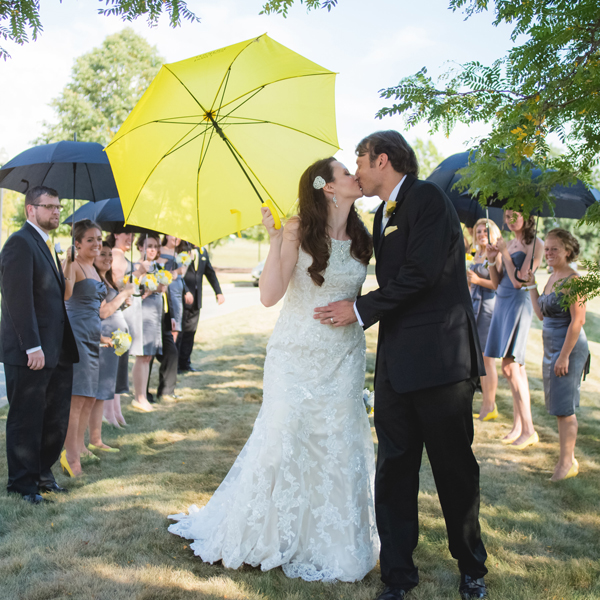 When the two visited New York City for a friend’s birthday, Jordan took the opportunity to use the setting of their favorite show as the setting for his proposal. He handed her a box with a yellow umbrella inside — a prop from the show that Megan says “symbolizes true love and waiting to find the one.” He then presented her with a scrapbook entitled, “How I Met Megan,” containing special memories from their three-year relationship. On the last page, he’d written the all-important question: “Will you marry me?”

After accepting the themed proposal, the next logical step seemed to be to plan a themed wedding. “As months progressed, more and more things came into it,” Megan says. “From our save-the-dates to dinner-table décor, we had accents of the show. All of those decorations at the wedding just kind of made sense, and I thought it would make really cute pictures with my bridesmaids and the bridal party.” 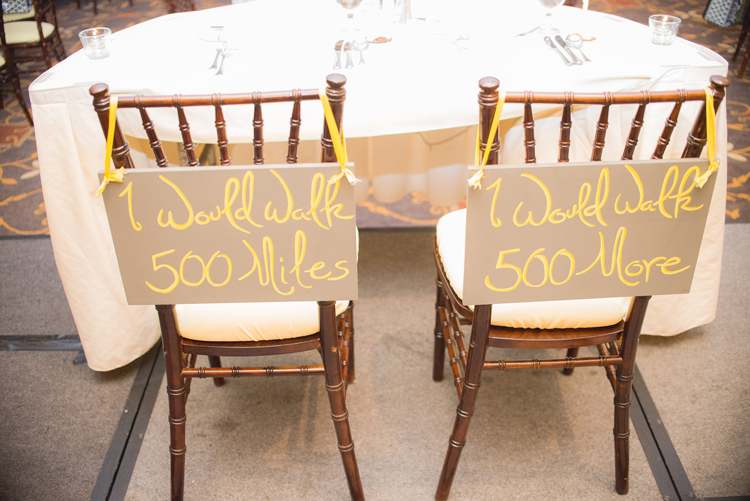 Megan wove references to “How I Met Your Mother” into every element of their day. For their engagement pictures, she and Jordan held two wooden signs crafted by her matron of honor reading, respectively, “I would walk 500 miles” and “I would walk 500 more.” The lyrics, from the song “500 Miles,” are used through various seasons of the show. The couple punched holes in those signs and hung them over the backs of their chairs at their sweetheart table.

Megan and one of her friends had a bet going about how the show would end — the final episode aired in 2014. They agreed that whoever lost would have to wear a ducky tie (another element from the show) to a place of the winner’s choosing. “When I got engaged, she sent me the ducky tie and said, ‘I’ll see this at the bachelorette party,’” Megan says with a laugh.

The bride repurposed the ducky tie as a prop for her reception photo booth, which featured as many references as Megan could gather. “If you watch the show regularly, there [are] a lot of parts to it that everybody knows,” she says. Along with the ducky tie, they put out a pair of red cowboy boots, a blue French horn, quotes from the show on sticks, a pineapple and, of course, a second yellow umbrella. 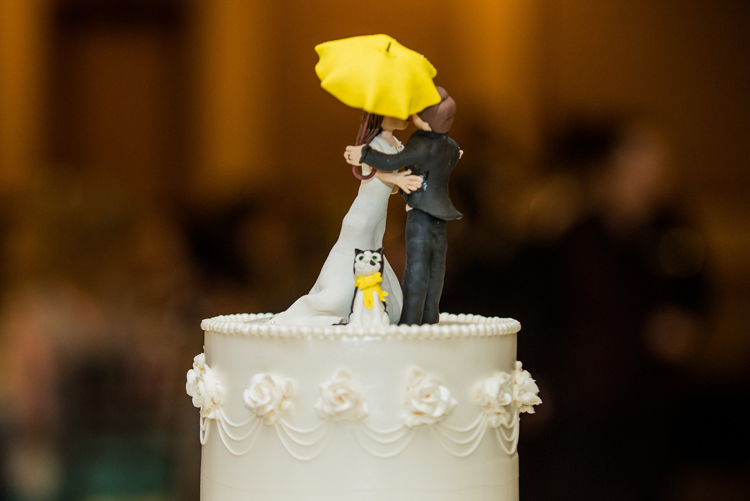 As the metaphorical icing on the cake (their real cake was, of course, topped with a themed cake topper), Megan and Jordan sent a wedding invitation to Josh Radnor, the actor who played lead character Ted Mosby. Radnor is a native of Ohio, and “Jordan’s cousin knows someone whose mother lives next door to Ted Mosby’s mother,” Megan says.

When they sent out their invitations, Jordan and Megan passed one along through the grapevine to Radnor. “Of course I knew he wouldn’t come, but I just thought it’d be funny,” Megan says. 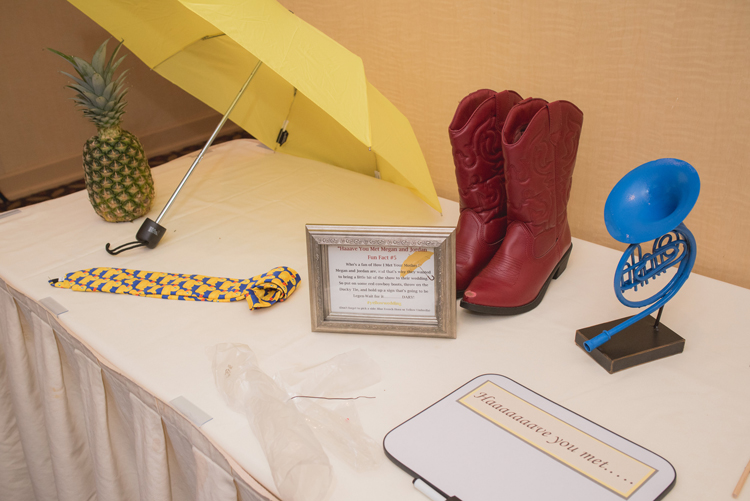 Much to her surprise, Radnor received the invitation — and wrote back. “He filled out the response card that he couldn’t make it, and then he wrote a note on the back saying he was sorry he couldn’t be there, but he was sure everything would work out great without him,” Megan says. She and Jordan now display that framed card framed in their home.

Because Megan works in marketing and communications, she often plans events and felt she had a leg up in bringing her vision to life. She credits the success to her friends and family who helped out.

“You have to look for those little touches that can really stand out,” Megan says. For favors, the couple gave out cookies shaped like yellow umbrellas, which her brother made. She advises looking for areas such as table numbers and menus, and then coming up with ways to tie in those elements with the theme. 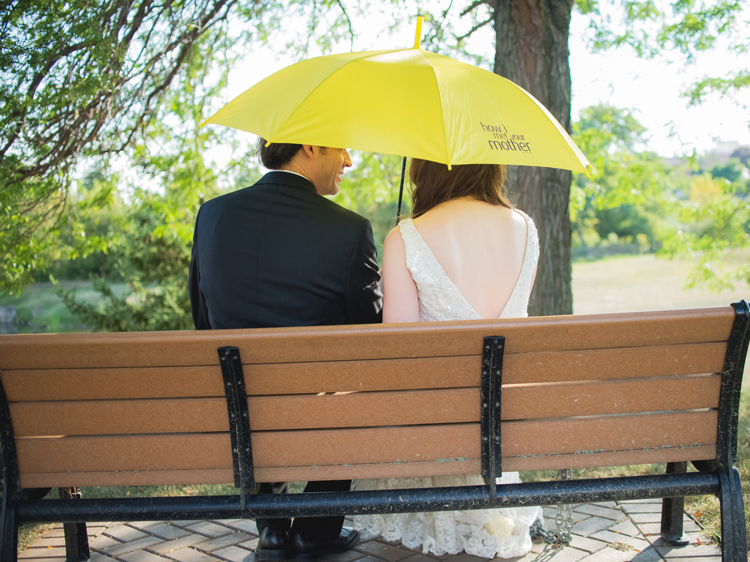 “Just like with any event, you have to write down everything you’re going to need in terms of a wedding,” she recommends.. For example, “Here’s the entryway, here’s what goes in the entryway for an event, is there anything there that I could turn into ‘How I Met Your Mother’ themed?”

After you cement your vision, she recommends figuring out how you’ll actually execute your ideas. “Are you going to scour Etsy and pay talented people to make things for you? Do you know anyone who can make things by hand?”

A final tip? Get your vendors involved, she says. “Our photographer, Emily Hixon, knew what I had in mind for the save-the-dates all the way up through our day-of wedding pictures, based on Pinterest and ‘How I Met Your Mother’ pictures I showed her. She really captured my vision.”

Megan says she couldn’t be happier with how everything came together. “When it was all said and done, the evening really brought our story out for everyone to see: the true story of how Jordan met Megan.”