How Scott Bricker is Changing Pittsburgh’s Streets For the Better

By making streets safer for bikers, we make them safer for all. 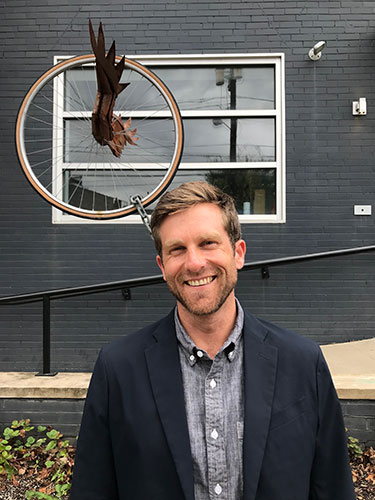 If you ask Scott Bricker what his favorite bike trail in Pittsburgh is, you won’t get just one simple answer.

“I’ve been really loving the increased amount of on-street protected bike lanes, so one of my favorites is the Penn Avenue bike lane Downtown — or, from the Strip District on Downtown — that now connects to the Stanwix Street-protected bike lane and Liberty Avenue, getting to Point State Park,” Bricker says. “I really love the bike lanes in the Hazelwood Green part of Hazelwood. It’s all raised and protected and really a high level of design. But yeah, I really love a lot of the trails.”

It’s no surprise that Bricker has several favorite bike trails in Pittsburgh — after all, he is a co-founder and the executive director of BikePGH, a nonprofit organization dedicated to biking education, community and advocacy. BikePGH has transformed Pittsburgh over the past 20 years — more than 100 miles of bike infrastructure and hundreds of bike racks have been installed in the city, thanks to their advocacy.

Bricker grew up in Chippewa in Beaver County, and started using a bike to get around regularly when he was in college — he earned his bachelor’s degree in 1999 from Carnegie Mellon University in Oakland. He used a mountain bike to get to class and ride around Pittsburgh.

When he moved across the country to San Francisco in 1999, he brought that bike with him, and bought a road bike to explore the Bay area. Bricker cites many benefits to biking — health, saving money, saving the environment and safer streets among them — but he said he was motivated to ride by the socialization and joy it brought him.

“I was also motivated by the environmental and affordability aspects of cycling, but those weren’t my primary reasons for doing it,” Bricker wrote in an email. “I did it because it was fun.”

Bricker, now 44, lives in East Liberty with his wife, and while they do own a car, he says they don’t use it very much. It’s mostly used for road trips, carrying cargo that won’t fit easily on a bike or when the weather is terrible.

“I try my best to default to other modes [of transportation] besides driving, but sometimes a car is useful,” Bricker says.

Most often, Bricker will take one of his many bicycles. He owns a commuter bike, an electric cargo bike, a mountain bike, another older commuter bike that he uses as a spare, a road bike, a “beater” bike for the winter and a retro-commuter bike.

There isn’t one perfect type of bicycle for riding in Pittsburgh, he says, because each one is designed for a different purpose. If you want to ride 50 miles down the street really fast, use a road bike. For biking to work, look into commuter bikes. For riding through the hilly, rocky hills of Frick Park, try a mountain bike.

BikePGH wants to make the streets of Pittsburgh safer for all, no matter what kind of bike you own — or even if you don’t own a bike at all, Bricker says. BikePGH, he says, also works to make streets safer for pedestrians through its advocacy, which has led to more neighborways (low-traffic streets that prioritize pedestrians and cyclists), repairs of public staircases throughout the city, and traffic-calming measures to slow down cars on the road.

The nonprofit also wants to push for revisiting the zoning code, changing it to enhance walkability in Pittsburgh’s neighborhoods. Bricker says having fewer curb cuts for driveways on sidewalks, raising crosswalks, getting rid of mandatory parking minimums and zoning neighborhoods to place things like corner stores in walkable distances could make a big difference in making Pittsburgh more walkable.

Bricker says BikePGH promotes gender equality in the biking community through programs like WMNBikePGH, which aims to make the biking community less male-dominated. According to the 2020 American Community Survey by the U.S. Census, while 2.4% of male workers older than 16 in Pittsburgh bike to work, only 0.8% of female workers older than 16 do the same.

“We really want to see more parity,” Bricker says. “It [biking] shouldn’t just be a thing that men do.”

The program isn’t just for women — BikePGH’s website says WMNBikePGH also supports “intersex people, non-binary, genderqueer, agender and gender variant folks, as well as those whose gender identity falls outside of the dominant conceptions of gender.”

Even though BikePGH’s advocacy has made such substantial improvements for cyclists and pedestrians in Pittsburgh, Bricker says that he isn’t quite satisfied yet.

“People deserve safe networks of bikeways and walkways, and Pittsburgh and every municipality that borders it need to do more to make that a reality,” Bricker says.