How Pittsburgh Couple Prevented Pandemic From Ruining Their Wedding Day

Jared Dziak and Samantha Lang managed to pull off an intimate family affair. 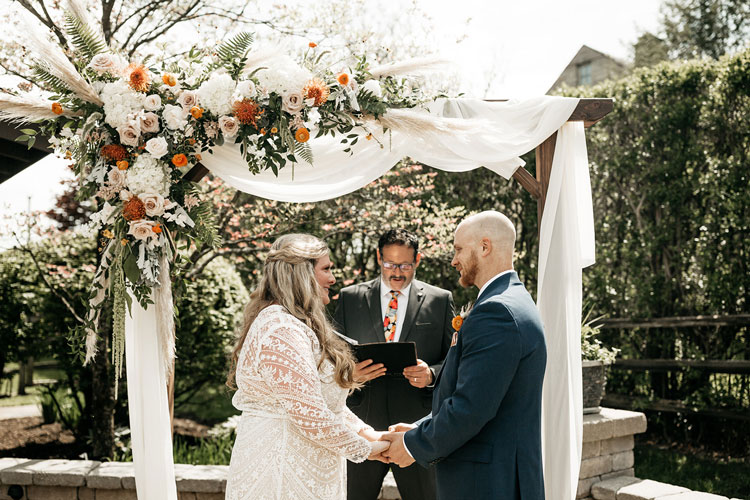 Samantha Lang was a bride on the ball when it came to planning her and Jared Dziak’s 265-person wedding. Within a month after Jared proposed, she had booked Bramblewood Barn and purchased her dress.

Then, the coronavirus crept through state lines, infecting one plan after another: Sam’s dress was unable to be altered before businesses closed, Jared’s suit was locked-up at Men’s Wearhouse and the hotel where their friends and family were supposed to stay closed, refunding their rooms.

“I think everything crashing and burning was stressing me out even more,” says Sam. “As soon as we postponed the wedding, I just felt infinitely better.”

The couple postponed until August, but the wait brewed in their minds. 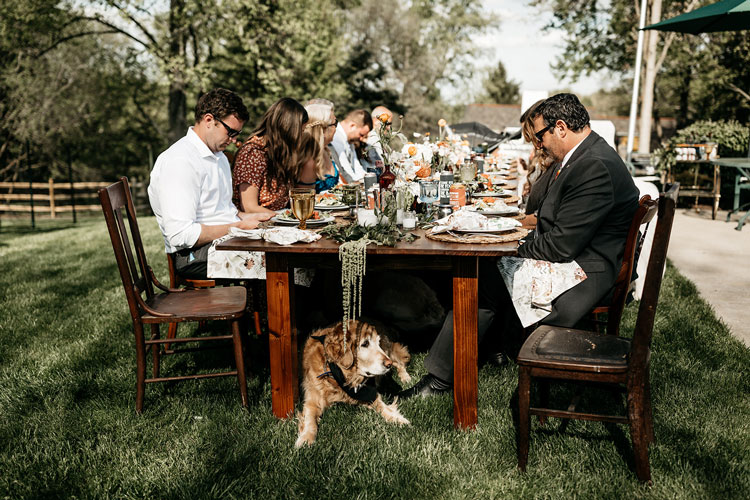 “Jared and I were talking about it, and we were like, ‘We’ve had our hearts set on May 16 for almost a year,’” Sam recalls. “‘Why don’t we just still go through with it?’”

So in early April, they notified their guests they were still getting hitched — with a few modifications. The couple planned to have their immediate families gather at the bride’s childhood home in Wexford, while their guests would tune in through an Event Live livestream.

In just six weeks, all of the preparations came together. The families power-washed the patio and replaced the mulch, and Jared handcrafted an arbor for the couple to be wed under. Sam even tested her baking skills by making the wedding cake. Julie James Designs tied the boho-chic aesthetic together with warm floral arrangements that brought the suburban backyard to life.

The couple also reached out to the photographer they had booked, Rachel Kunzen of Rachel Kunzen Photography, to see if she would be comfortable photographing the big day. Kunzen knew just how special this scaled-down version would be. She gladly accepted the opportunity. 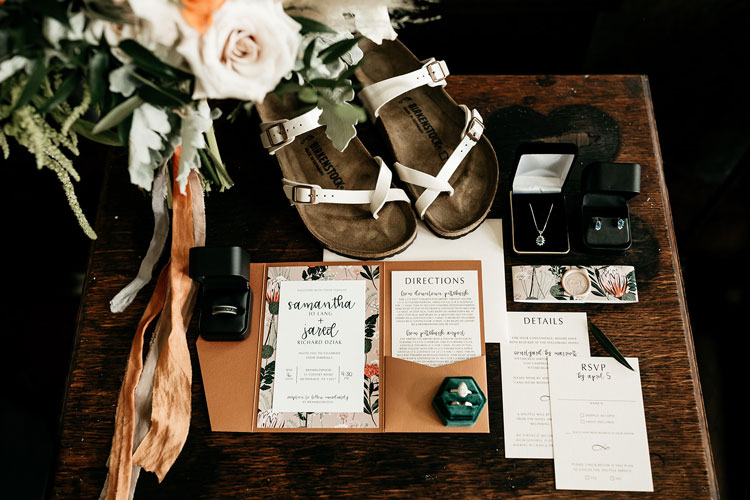 “I love photographing in people’s homes because homes, in general, have so many memories attached to them,” Kunzen says. “Just the amount of memories that were shared there, I think, is really cool.”

Sam’s uncle officiated the ceremony. As their guests watched virtually, Sam, wearing her Saldana Vintage gown, and Jared, in a suit from his closet, read their handwritten vows.

“People could comment as they were watching, and you didn’t need an app to watch it or anything,” says Jared. “It just sent as a link, which was super cool.” 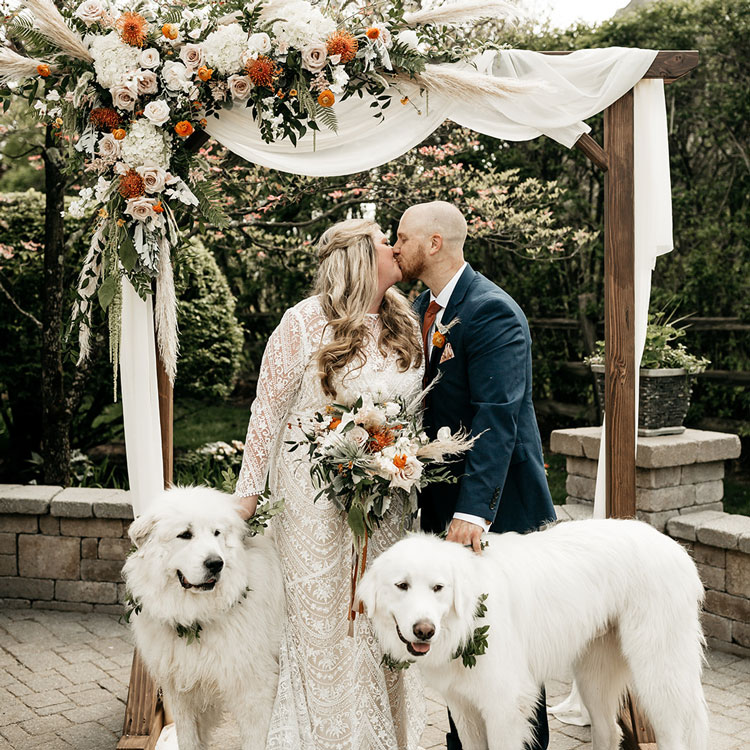 The relaxed wedding allowed for more personal details and surprises that wouldn’t have been possible at their original venue. The couple’s two Great Pyrenees sat beside them during the ceremony, along with three other family pups adorned in “Wedding Crasher” bandanas.

They even had a family-style dinner, passing plates and feeding scraps to their obedient buddies, which created an atmosphere unlike a traditional wedding.

“Just those little moments that made it have that extra layer of meaning,” Kunzen recalls. “It was a different level of intimacy.”

Ending the night on a traditional, yet unexpected, note, Sam’s brother and father surprised the newlyweds with a getaway ride. The couple rattled off into the yard in the family tractor, decorated with black and gold I.C. Light beer cans and a “Just Married” sign.

“It was the most redneck, Pittsburgh thing,” laughs Sam. “But, it was great.”

Mr. and Mrs. Dziak agree that the family-oriented style suited their personalities well, but they hope that come August they can celebrate with everyone. 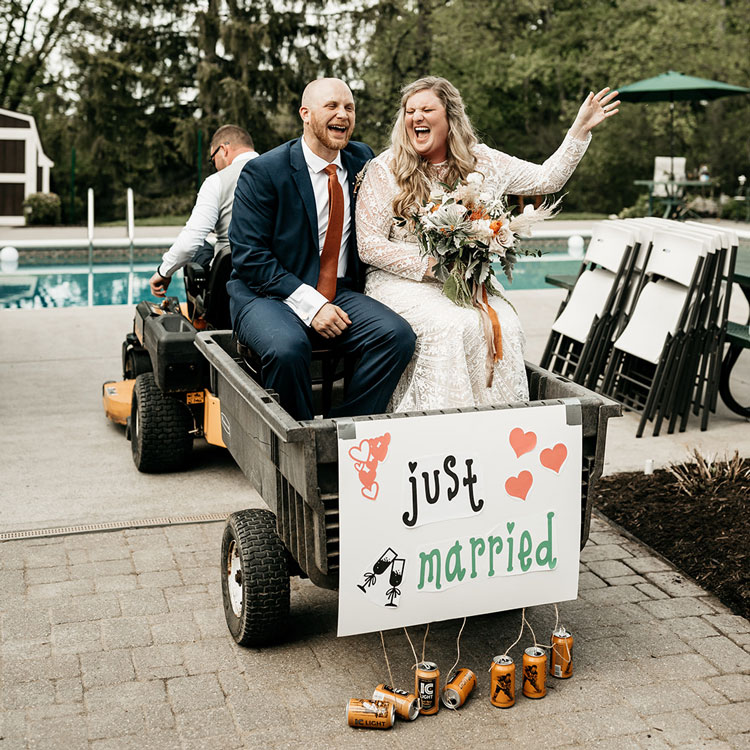 How to Keep the Weather From Dampening Your Special Day