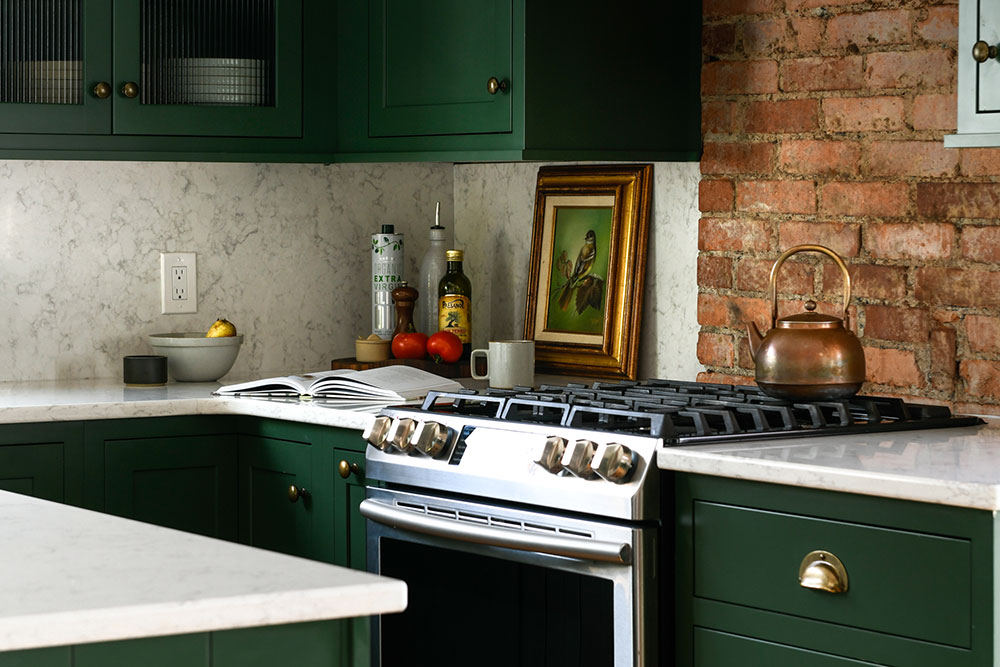 When Highland Park residents Joe and Pepper bought their home in 2015, renovating their colorless kitchen was a must.

The couple, who have asked that their last names not be used, have always had a knack for design. Joe says he and his wife, who love to entertain guests, knew right away that they wanted to scrap the kitchen’s gray speckle-tiled floor and countertops, not to mention its cramped layout.

“The previous kitchen had a very 1980s-like aesthetic. It was very congested, and it wasn’t social at all,” Joe says. “It was really hard to hang out with whoever was cooking.” 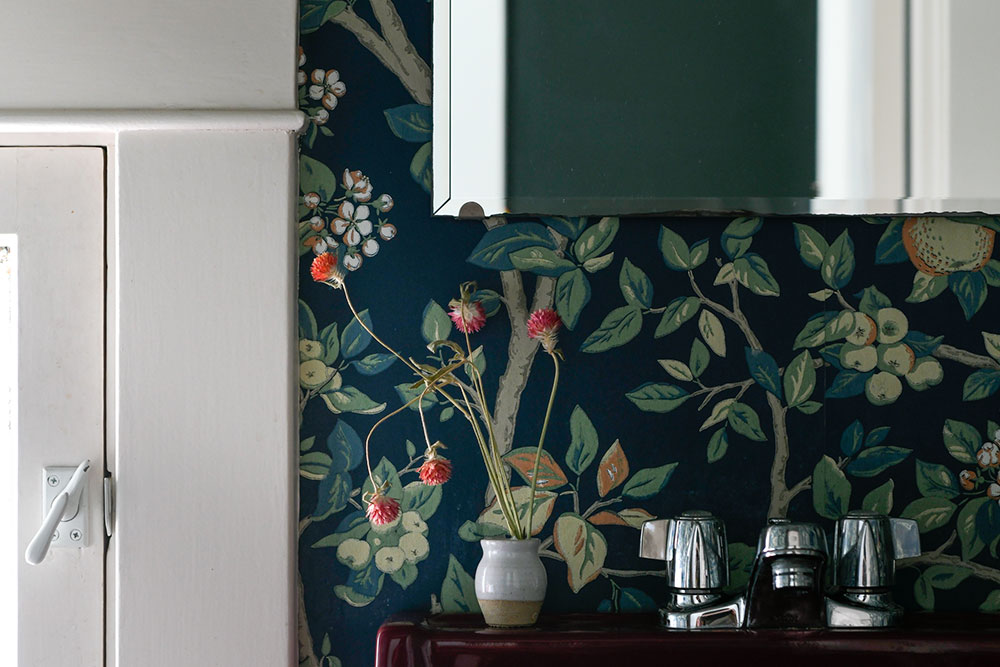 The couple mulled over what to do with their kitchen for years — until Pepper realized the green, leafy wallpaper in the home’s entryway might look even better in the kitchen.

“Green is one of my favorite colors, and I have a lot of house plants and really natural things, so it kind of blends in,” she says. “[The wallpaper] was the color palette inspiration.”

After teaming up with interior designers Alison Shapiro of A. Shapiro Design and Amanda Johnson of Oakmont-based Marino Kitchen & Bath, the couple’s kitchen is much more fit for their sociable lifestyle — and very green. Construction on the kitchen began in late 2020 and finished in spring 2021. 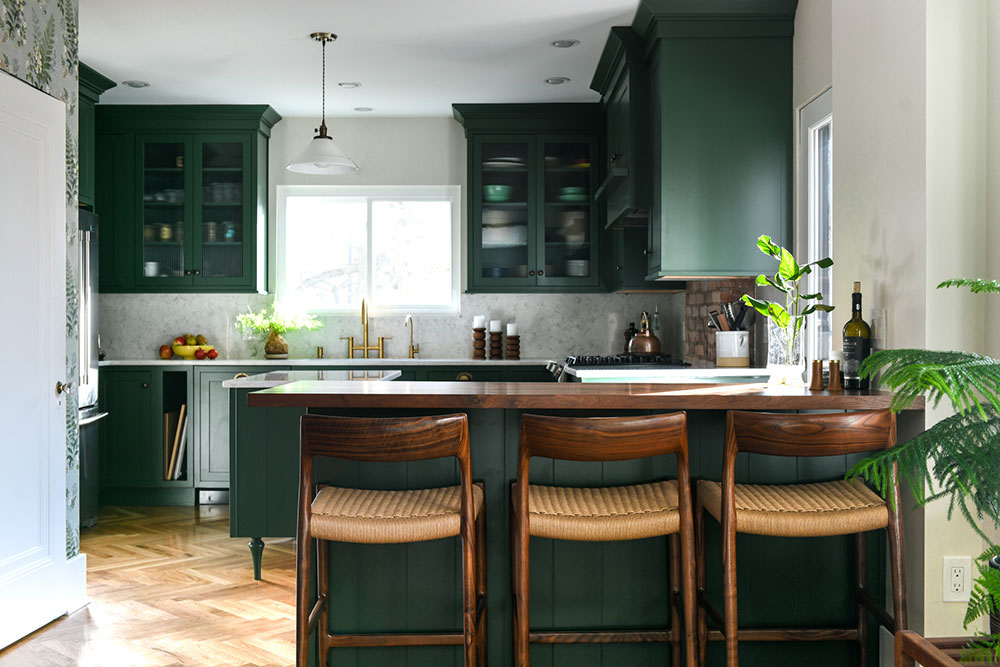 To open up space and emphasize natural light, the designers took down the wall between the kitchen and dining room. Today, a walnut peninsula countertop separates the cooking and dining areas. The duo also prioritized deep cabinetry, painted Vogue Green by Sherwin-Williams, to maximize storage. Coordinating with the rich olive hue are Joe and Pepper’s plethora of plants, which sit on the large window sill.

Johnson says the fun, naturistic green was inspired by deVOL Kitchens, an interior design firm based in England. Completing the look are vintage French light fixtures from the 1950s the couple chose.

“It’s kind of like an English country look, kind of eclectic and imperfect,” Johnson says. “It was fun because people in Pittsburgh are more conservative when it comes to color. But when you do have someone that comes in and they want a green kitchen, it’s a little bit more exciting.” 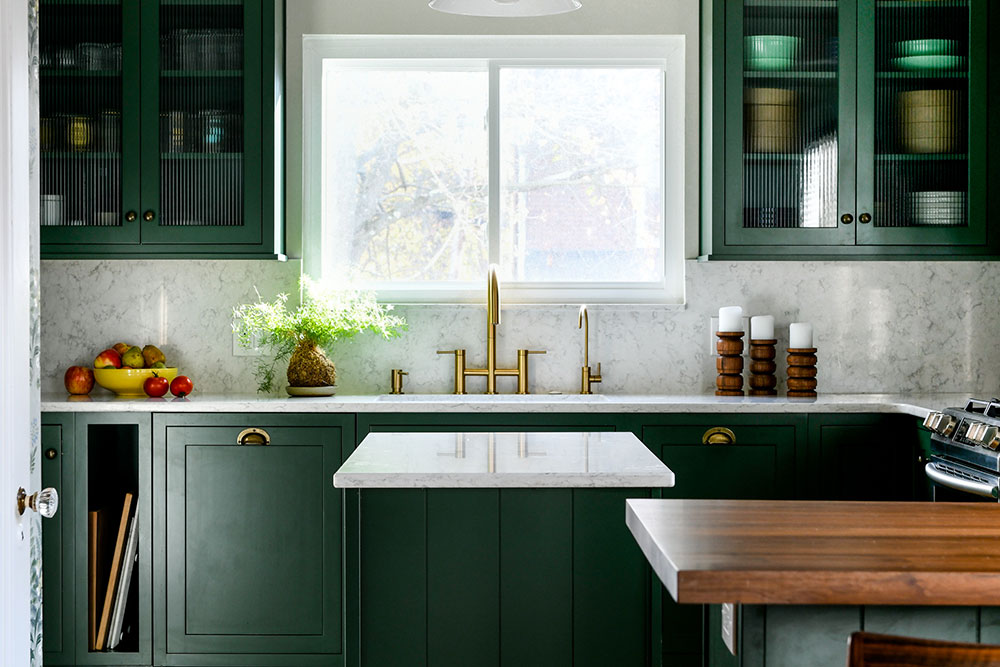 She adds one of her favorite details of the renovation is the exposed brick behind the range.

“The brick was originally there. We left it as is and worked around it, which meant we had to modify the cabinets,” she says. “Those cabinets are actually extra deep in order to accommodate that brick column or chimney that’s there, and the range hood above matches the cabinets.”

Shapiro says in addition to the green cabinets, she used the sink, stove and brick column as guiding principles to highlight the stunning glass cabinetry when redesigning the space. 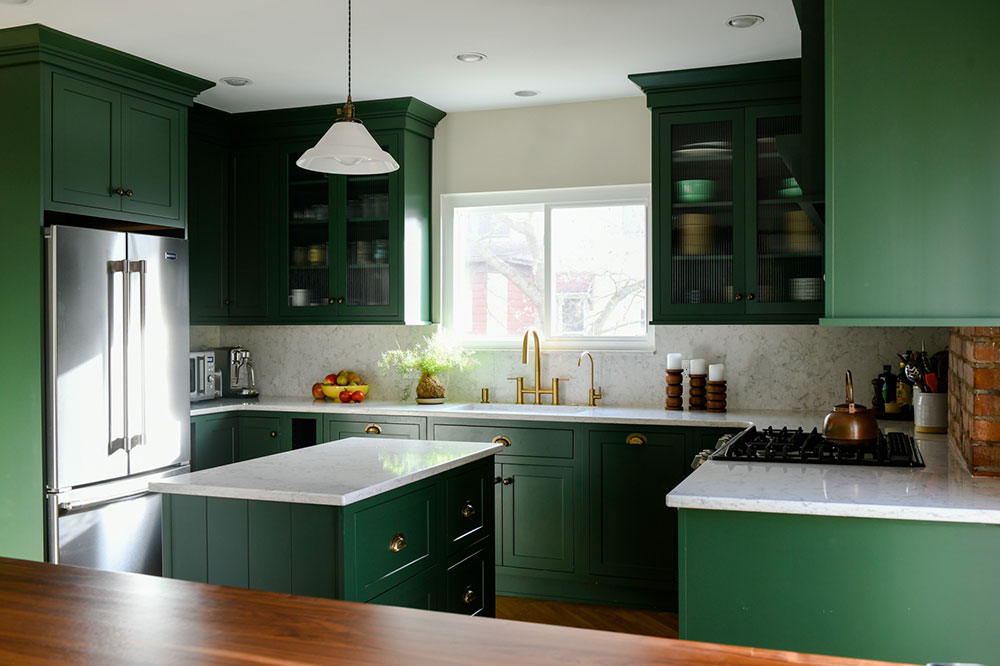 “We were able to open up to the dining room so we could create those nice focal points around the window with the glass cabinets around it,” she says. “That’s really a highlight, that you can see it from the dining room.”

An open-floor plan came first and foremost when imagining the renovation, Joe says.

“The connection between the dining room and the kitchen enables a lot more interaction with whoever’s in the kitchen, which is usually my wife because she’s the cook,” he says. “It’s made cooking much more social. I can sit at the countertop now and just chit chat — I feel like it makes the whole process of preparing food a lot more enjoyable for everybody.”

Joe, a carpenter and furniture designer, handmade most of the furniture in the couple’s home, including the dining room table, console table, dining room chairs and buffet.

“Most of it, Pepper and I designed together,” he says. 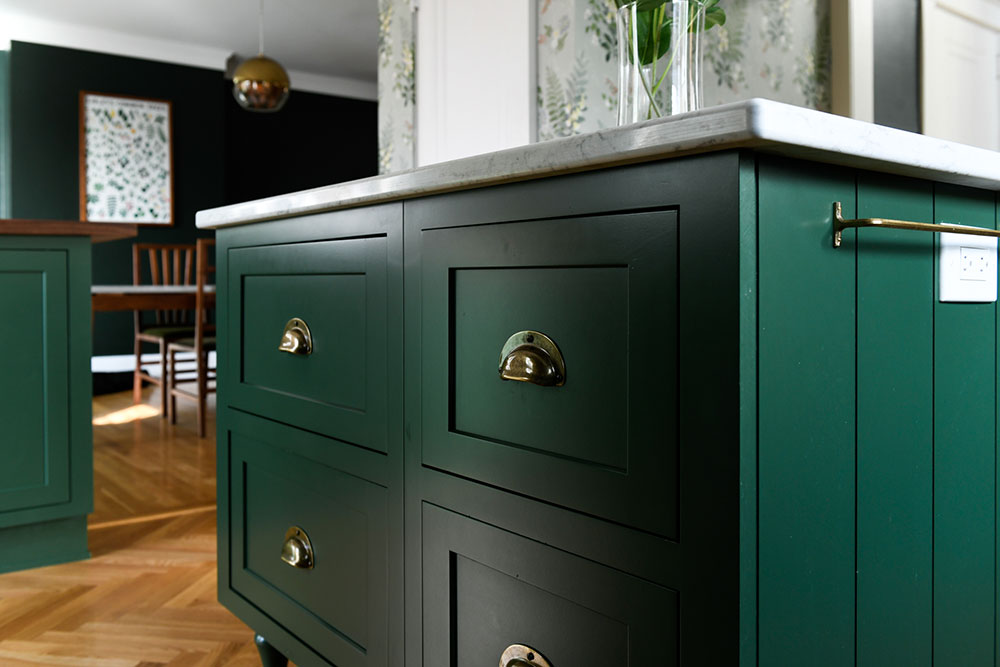 “Joe already started bringing aspects of nature into the house with the wood tones and the furniture that he built,” she says. “So preserving the natural wood floors and coordinating those raw natural wood moments were pretty crucial in connecting the beauty and the style of the handmade furniture that’s throughout the rest of the space.”

Shapiro says that although a leafy green wallpaper isn’t common in a kitchen, it felt perfect for this renovation because it gave the space plenty of nature-inspired texture. Also, because the house is on a hill, there are views of treetops throughout the home, including from the large window in the kitchen.

“Nature always has a place in the kitchen — because that’s where food comes from,” Shapiro says. “There’s this great correlation between leaves on the wallpaper and leaves that you see on the trees through the windows in the kitchen — and then the leaves that are in your salad.”

This article appears in the October 2022 issue of Pittsburgh Magazine.
Categories: HOME + Design