How Did a Groundhog Become Pennsylvania’s Favorite Weatherman?

The real history behind one of the strangest holidays in America. 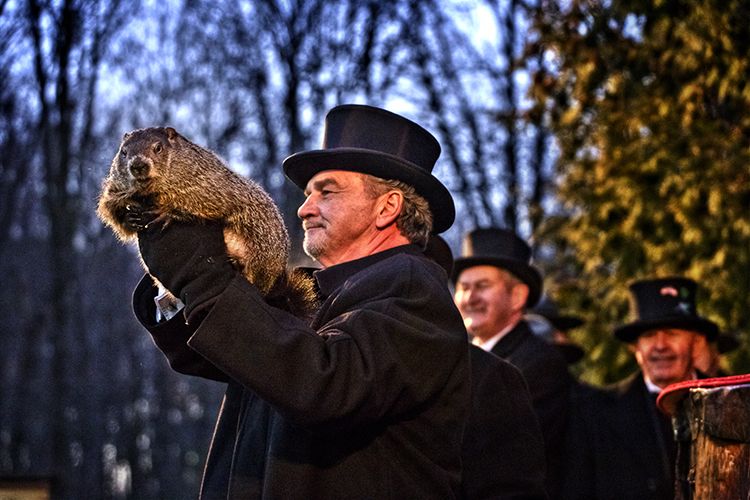 This morning, you might be wondering: how exactly did we decide that a Pennsylvania groundhog’s shadow has anything to do with the weather? By the way, Punxsutawney Phil did see his shadow Wednesday morning, thus forecasting six more weeks of winter.

As it turns out, this is a tradition centuries in the making.

The holiday began as the Christian celebration of Candlemas Day, which took place every year on Feb. 2. On this day, Christians would take candles to their church to be blessed.

At this time, the holiday had nothing to do with groundhogs nor the weather — the goal was to bring blessings into the home for the rest of winter.

Over the years, people began to predict the seasons based on the weather of Candlemas Day, says the Punxsutawney Groundhog Club. As the following English folk song shows, if the day was bright and sunny, the winter season would be longer and colder; if skies were cloudy, a temperate spring would come soon.

If Candlemas be fair and bright,

Come, Winter, have another flight;

If Candlemas brings clouds and rain,

Go Winter, and come not again.

This interpretation of Candlemas gained popularity across Europe, including Germany. The Germans were the first to introduce animals to the Candlemas tradition. s prediction beginning at 6 a.m. Wednesday, Feb. 2.

However, a different kind of “hog” was the center of attention on German Candlemas Day: the hedgehog. If the hedgehog saw his shadow, a six-week “Second Winter” would come.

When Germans migrated to the United States and settled in Pennsylvania, they brought the celebration of Candlemas with them. However, there was a distinct lack of hedgehogs living in Pennsylvania. They needed a new animal for their age-old tradition — this is what put the groundhog in Groundhog Day.

Groundhogs were a part of Punxsutawney’s culture long before German settlers brought Candlemas to the Pennsylvania woods. According to the Punxsutawney Historical Society, Native Americans of the Delaware tribe, who inhabited the land, had their own local lore about the animal.

The Delaware Indians — also known as the Lenape people — believed their original ancestors were animals who lived in “mother earth” and emerged centuries later as humans.

“Thus it was that Oijik (Wejak), or Wojak, which was carried over to us as ‘Woodchuck,’ came to be recognized as the ‘grandfather’ of the earliest known inhabitants of this area,” says the Society.

On Feb. 2, 1886, the Punxsutawney Spirit printed a short paragraph about the holiday: “Today is groundhog day and up to the time of going to press the beast has not seen its shadow.”

This was the first time Groundhog Day was recognized in the newspaper.

The next year marked the first official trek to Gobbler’s Knob, about two miles outside of this Jefferson County town. It’s a tradition that would continue for over a century to come. An editor of the local newspaper declared Punxsutawney Phil to be America’s only official weather-predicting groundhog.

Of course, this hasn’t stopped copycats from popping up across the country.

Nowadays, Groundhog Day celebrations in the Punxsutawney area last longer than just one morning. Leading up to the special day, the town hosts Groundhog Days in the Park, featuring live music, food trucks and family activities like Build-a-Phil.

On Groundhog Day itself, tens of thousands of people come to watch the main event. For those not willing to brave the cold, there is now a “Hogspitality Village” at the Knob Pavilion, where visitors can buy a $50 ticket to stay warm, eat and drink, watch live feed from the Knob and snap a photo with the famed groundhog himself after he makes his proclamation.

Despite all these modern changes, one thing has remained the same — whether Phil predicts it or not, we’re all hoping for an early spring.