How Chef Martin Thomas Gets Creative

The executive chef of the Sewickley Heights Golf Club, runs an ambitious, yet under-the-radar kitchen. 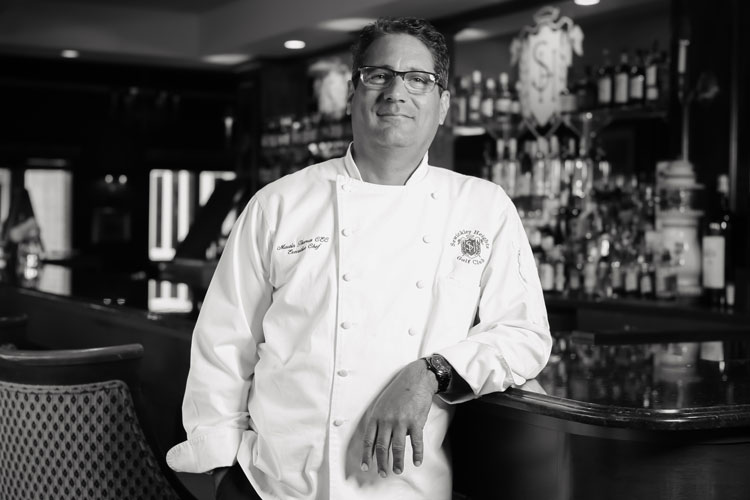 As dining out becomes a primary form of entertainment, the names of many of Pittsburgh’s top chefs increasingly are familiar to the general public. Yet there’s a cadre of chefs celebrated only by those for whom they cook exclusively. Chefs such as Martin Thomas, the executive chef of Sewickley Heights Golf Club. Country club chefs need to keep up with food trends as much as restaurant chefs, but they also have to serve a selection of “Golden Oldies” to their sometimes conservative clientele.

“You have to take care of the sacred cows, sometimes quite literally. There are certain types of dishes that need to be on the menu. But you also have to be creative for the younger members who are going out trying all the new spots,” says Thomas.

Thomas purchases four to five steers per year from McElhaney Family Farm in Hookstown. In addition to an ambitious beef program, he has a rotating menu at the country club that includes seasonal dishes such as zucchini carpaccio and arugula salad with FireFly Farms chèvre.

He started working in restaurant kitchens when he was 16 as a busboy at the Wooden Angel in Beaver and enrolled in the Culinary Institute of America in 1980.

“When I told my mother and father I wanted to be a chef my mother cried. Back in the late 1970s it wasn’t like it was today. She was worried that I wouldn’t be able to feed my family,” he says.

Thomas returned to Pittsburgh and worked at the nouvelle French restaurant Le Petit Cafe in Shadyside, Le Papillon in Greentree and other restaurants before opening Seasons Cafe in Coraopolis with his brother in 1988. “The menu followed the seasons, which was pretty different in the late 1980s and early 1990s,” he says.

The brothers closed Seasons Cafe in 1991, and Thomas began a new career as the executive chef of the Westmoreland Country Club.

“When I entered the club business, it was a bit of culture shock for me,” he says.

It was at Westmoreland, which had an on-site butcher shop, that Thomas formed relationships with a theretofore untapped community of farmers and ranchers. He stayed there for 17 years before moving to the Sewickley Heights Golf Club in 2011.

The chef who went to culinary school long before it was cool now is passing on his skills to a new generation with an ambitious apprenticeship program. “This is a trade. We’re craftsmen. And it’s up to us to pass on that craft,” he says.

This is a recipe I use every year after the first frost. We try to keep our pantry stocked with seasonal chutneys, relishes and tapenades, as they often come in handy in a pinch. This particular recipe is on the spicy side. It goes well with any grilled or broiled seafood, grilled or smoked chops and pork roast.

Directions: Combine all of the ingredients in a heavy sauce pot over medium high heat, stirring until the mixture comes to a boil and the sugar dissolves. Reduce the heat to maintain a gentle simmer. Continue cooking — and stir often — until the mixture thickens to a syrup, about 30 to 40 minutes. Let cool. Cover and store in the refrigerator for up to three months.