How and Where and When to Dine Out with Kids

When special-occasion eaters without kids and everyday diners with kids in tow collide, there can be conflict. A couple of tips can make life copacetic for everyone in the restaurant. 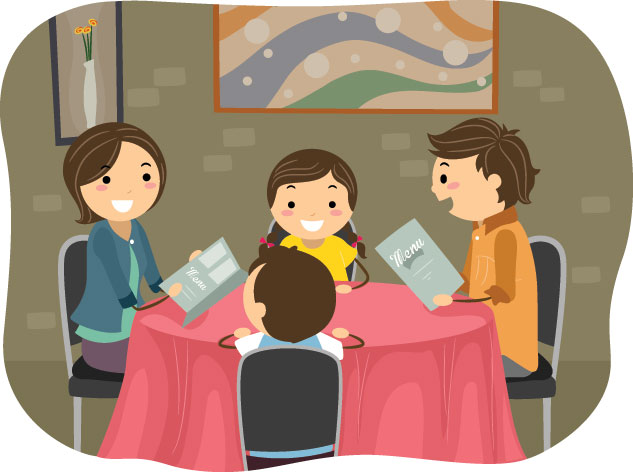 Visiting a restaurant often is the centerpiece of an evening out. For people with children, part of the planning revolves around a sometimes difficult question: Do you leave the kids at home with a babysitter or take them with you to dinner?

That question pops up on more casual occasions, too. For a lot of people, going out for a meal is woven into the fabric of a busy life. “Both parents work. And you have very active kids who are involved in sports, robots and other school activities. In moving the kids around, and yourselves, you often don’t have time to make something to eat,” says Bill Fuller, president and corporate chef of big Burrito Restaurant Group.

Sonja J Finn, chef and owner of Dinette in Shadyside and consulting chef at The Cafe Carnegie in Oakland, says taking your kids out can have lifelong benefits. “You can show them at an early age how to be a good diner,” she says.

Still, when special-occasion eaters without kids and everyday diners with kids in tow collide, there can be conflict. A couple of tips can make life copacetic for everyone in the restaurant.

As a general rule, if you’re going to take your kids with you to dinner, you should plan on going earlier in the evening. Restaurants tend to be quieter during those hours, creating a less intense energy more conducive to peaceful children; there will also be fewer diners to disrupt if things go in the other direction. Finn says that the shift from families to couples and groups of adults tends to happen around 6:30 p.m. at Dinette (The Cafe Carnegie is one of the most family-friendly sophisticated restaurants in Pittsburgh, in part due to its daytime hours).

​Carleen King, co-owner of family-friendly Carmi Restaurant on East Carson Street in the South Side, says she enjoyed taking her six children (now all adults) to restaurants as they were growing up. She says it’s essential to have the same rules dining out as you do at home. “No jumping on seats, no shouting — and to always act respectfully to adults,” she says.

Still, she adds, kids will be kids. Now, she keeps a plastic shoebox full of stuff she purchased at the dollar store — crayons, stickers, coloring books and other activities — to keep her two grandkids entertained when they go out to eat.

If a child does act up, it’s time for the parent to step into action. “The rules [that we all know as parents] are basically like, if your baby is crying, pick it up. If your children are very loud or disturbing other diners, take them for a walk or take them outside until they’re ready to come in. And if your kid has a total meltdown, be ready to abort the mission because nobody is going to have a good time. And then try again next time,” Finn says.

Guests and restaurant owners should cut mothers some slack with one crucial issue, Finn adds: “Breastfeeding can’t be looked down upon. Women with babies shouldn’t need to stay at home. That needs to be supported.”

Fuller says that big Burrito’s Mad Mex restaurants are designed to be boisterous and fun, whereas at upscale Eleven Contemporary Kitchen there’s a chance that kids could disrupt the experience for other guests. Now that his kids are teenagers, however, he’s happy to take them to higher-end restaurants. “Sometimes my 16-year-old will tell me I need to wear a nicer shirt,” he says.

King says that she wants Carmi to feel as if you were visiting Grandma’s house.

“No matter if they’re crying or come in the door laughing and happy, that’s what we do,” she says.

She also believes that it’s important for kids to try whatever their parents are eating, but recognizes that their palates still are developing. A happy, well-fed kid is going to be better behaved than one who feels like he or she is being forced to eat something. King has a children’s menu that includes scaled-down portions of chicken and waffles, plus hamburgers and grilled cheese at Carmi.

Checking whether or not a restaurant has a kid’s menu — try the restaurant’s website or a quick phone call to see if it’s a child-friendly establishment — is a good way to determine if they expect children to come through the door regularly.

For Fuller, deciding what to order is about making sure that the experience remains fun for the whole family. While most adults might be comfortable eating sushi and adventurous eaters enjoy foie gras, those intense flavors might be a bit too much for a child.

“No matter what a foodie you are or how much you want to push your kids, they have a delicate, sensitive palate and they don’t want to eat the things grownups do,” he says.

To that end, big Burrito’s Mad Mex restaurants have a kid’s menu with appropriately sized (and priced) portions of dishes that range from easy-going mac-n-cheese and chicken nuggets to healthy chicken salad. And even somewhere as lovely as Eleven, he says, has some house-made chicken tenders handy in the freezer just in case there is a kid who is hesitant to eat more adult food. “You can almost always get plain noodles or plain vegetables or a plain piece of meat at a restaurant,” Fuller says.

Finn says that it’s ok for parents to push the boundaries a little bit. “Restaurants should provide options for children that give them a little more credit, [rather] than assume they want chicken fingers and buttered noodles,” says Finn.

At Cafe Carnegie, her curated kid’s menu includes items such as shrimp cocktail and an assortment of tea sandwiches, as well as an all-natural hot dog in a house-made baguette.

“You should be providing a healthy meal,” she says.

At the end of the day, the chefs say, it’s up to the parents to set the example for their kids.

“From the time my youngest was little till now, I don’t think kids change much. The parenting has changed a little bit — kids get away with a lot more than they used to — but I don’t think the restaurant industry has changed much,” says King.