Hot Property: You Can Walk to Hartwood Acres from this Wooded Lot

The colonial-style home in Hampton Township also is close enough to the park that you can hear the sounds of outdoor concerts from the rear deck. 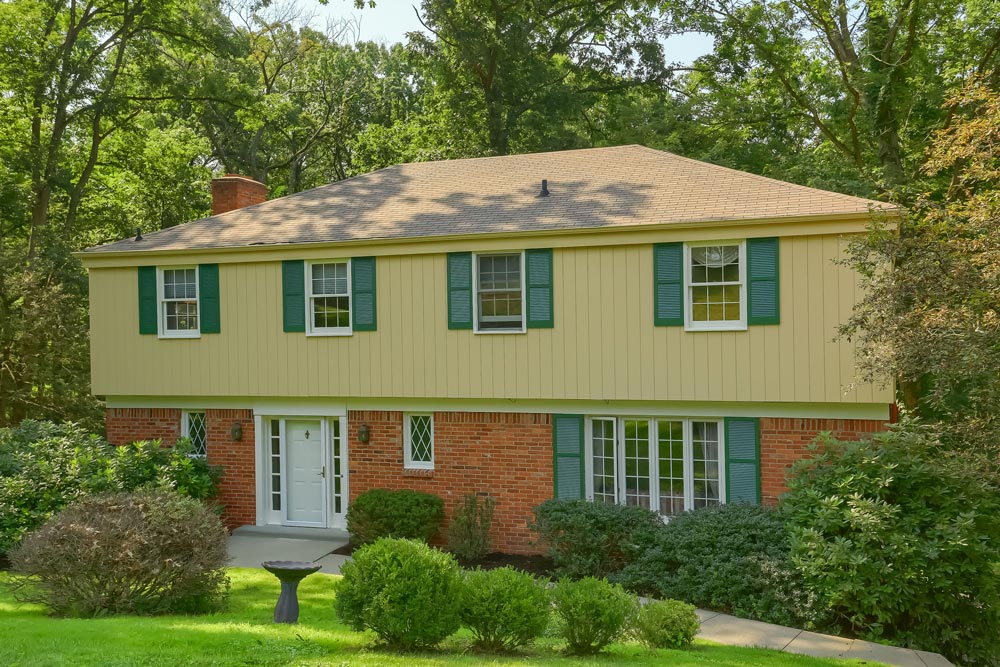 “Awestruck,” he says. “It reminded me of where I grew up in New Jersey. I love being in the trees and feeling like I am in the woods.” 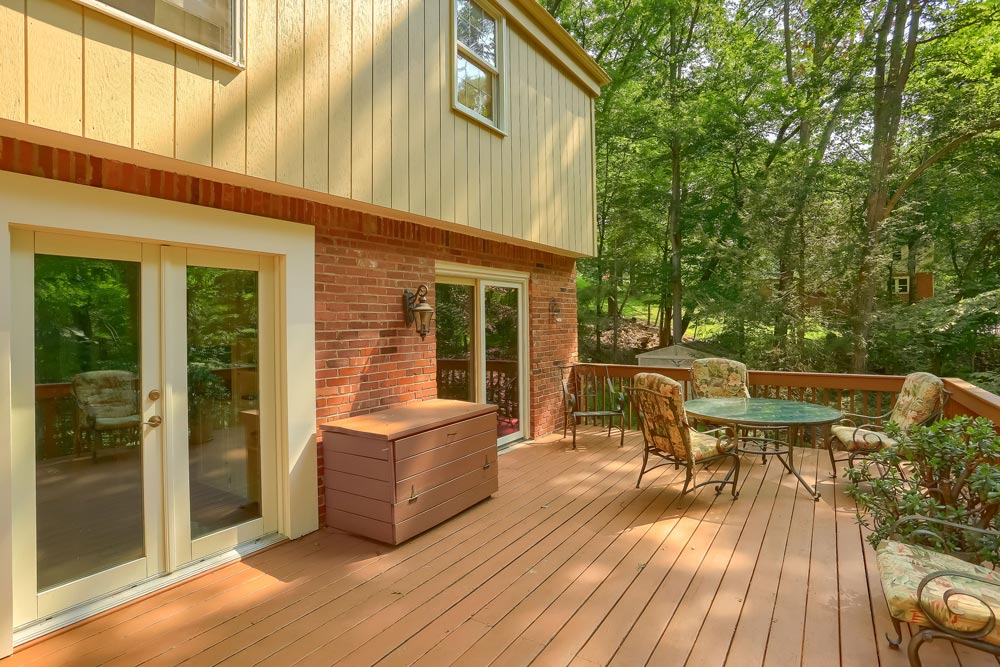 Located on a full acre, the four-bedroom, two-and-one-half bathroom Colonial-style home sits on a private, wooded lot. In the back of the home, a large deck overlooks the trees for year-round enjoyment. As an added bonus, the pristine woods lead right into Hartwood Acres.

“We used to walk there to see the concerts,” Knott says. “But you can listen to them from the deck, unless the crickets are really loud.”

Not a bad problem to have. 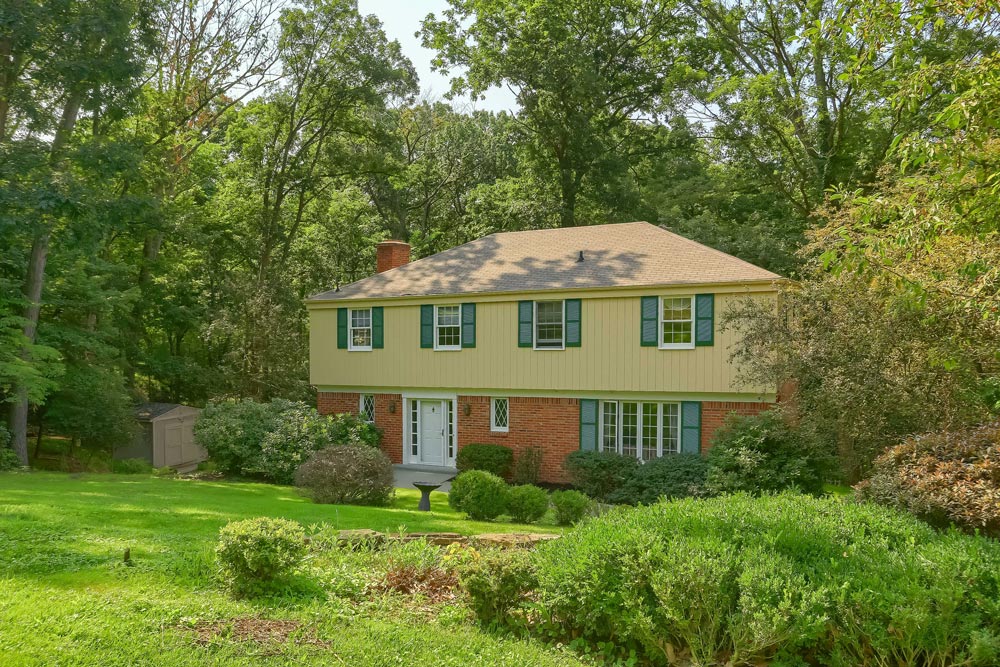 The exterior of the home is freshly painted in an earthy color palette, with green shutters that blend into the environment. A stacked stone wall is filled with natural landscape and leads to the two-car garage. 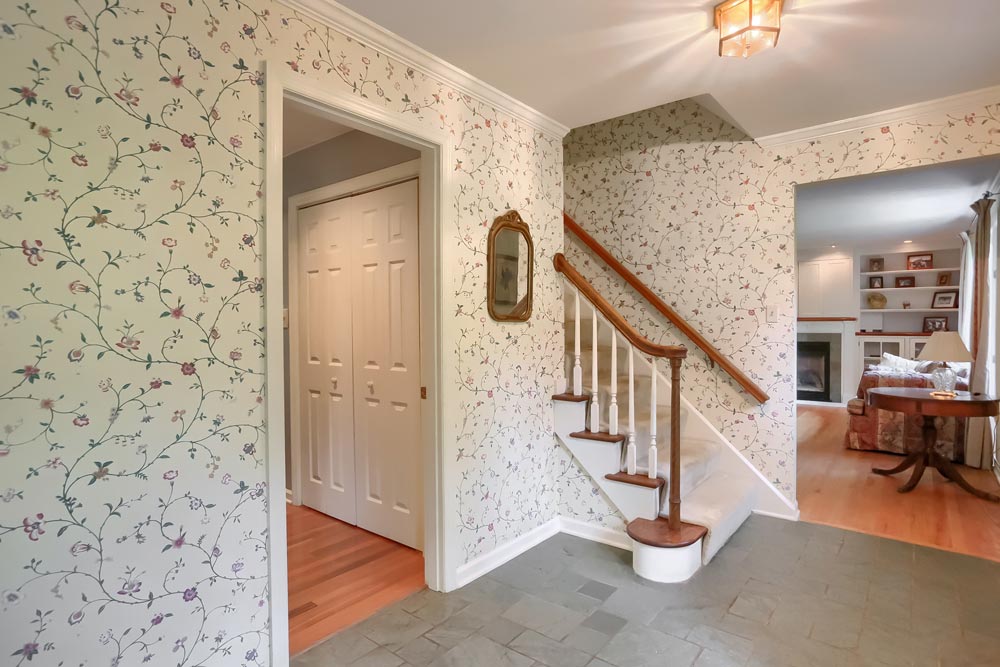 Inside, a gray tile floor is durable and neutral. A nature-inspired wallpaper fills the walls of the entry and upstairs halls, while a red powder room features a carved, furniture-style vanity with black stone top.

A formal living room is centered by a fireplace wall flanked by bookcases and there is a wall of windows that lets in plenty of light. Oak hardwood floors below run throughout the rest of the first and all of the second floor. 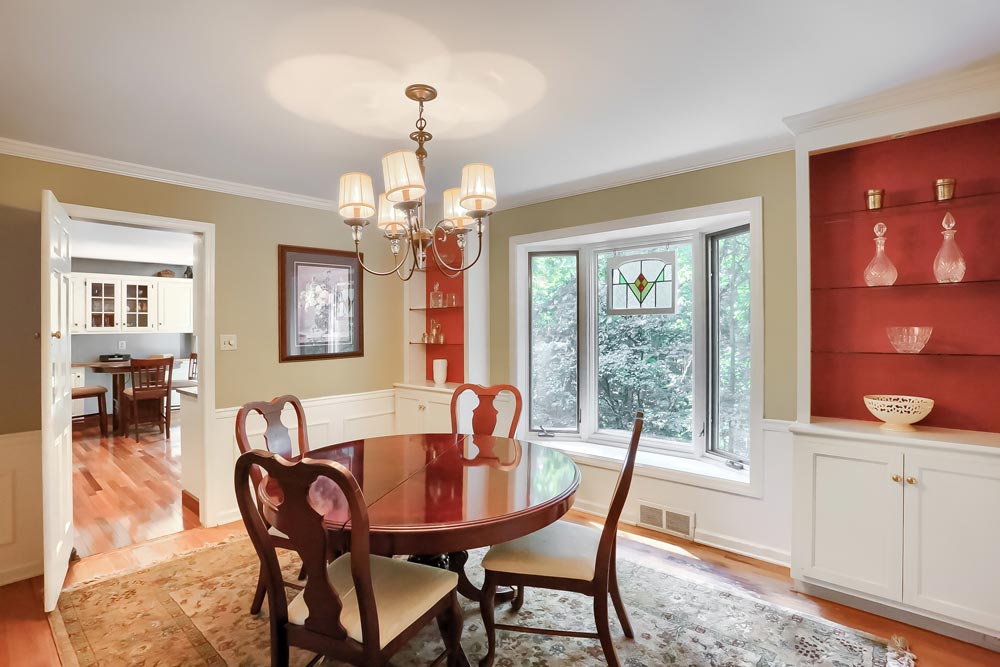 Entertaining is easy as the space flows to the formal dining room, where panel wainscoting and crown molding give it a dignified air. There’s a simple brass chandelier and built-in bookcases with a red backing, which nicely highlight a glass collection. A bow window hosts a window seat. 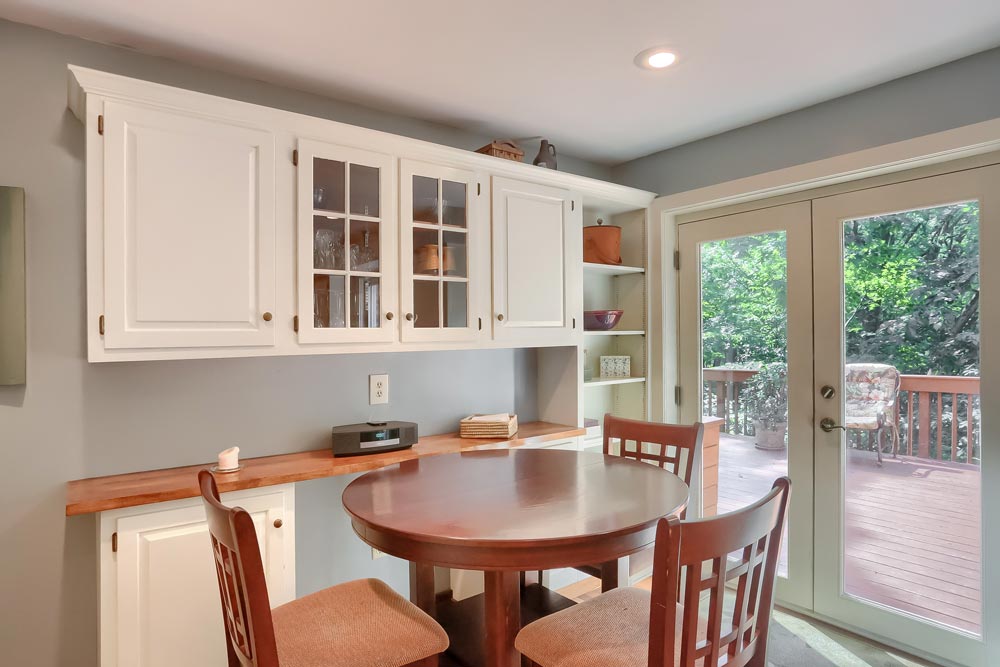 A swinging door leads to the kitchen, where the owners painted the cabinets, installed stone countertops and upgraded the floors. The result is an easy-to-live-in space that also features a serving wall. It also is flooded with light thanks to windows and a French door that opens to the rear deck.

“One of the best things about the house I discovered during COVID,” Knott adds. “The rear faces south. In the summer, the trees provide shade and in the winter there are no leaves, so it’s filled with pure sunshine all day coming into the back of the house.” 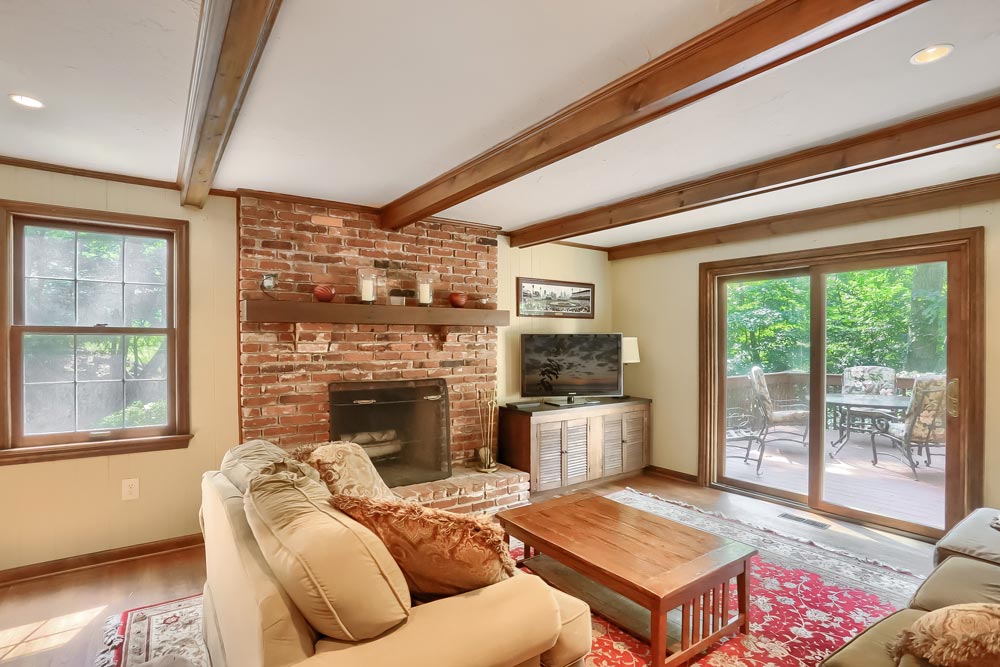 The den is another great place to relax. Knott installed a brick fireplace wall and ledge fireplace that complements the wood beams. There is a large sliding door that also opens to the back deck.

The home is not open-concept, which Knott says he prefers. The return of defined spaces also is a design trend that many are seeing the value in after being on top of each other during the COVID-19 pandemic.

“It’s nice to be able to go to the den and close the door and watch what I want on the TV,” Knott says.

Upstairs, an office with room for two people is outfitted with built-in shelves and a desk, making it a great work-from-home setup. 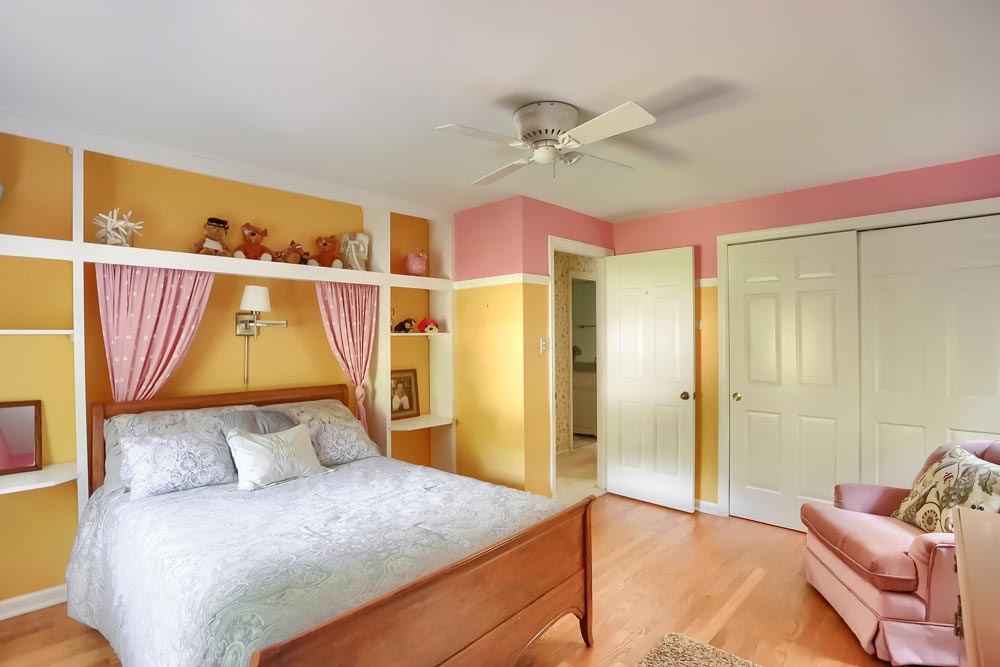 All four bedrooms are super roomy and have large closets. The former bedroom of Knott’s daughter is painted in shades of yellow and pink, with decorative molding. The other bedrooms are painted in neutral colors.

The primary bedroom is serviced by an ensuite bathroom featuring a large standing shower and built-in niches above the sink. Large-format tile and a 72-inch vanity round out the space.

A second full bathroom was remodeled just before the house was put on the market. It features a double vanity with gray-and-white granite, white subway tile and new brushed-nickel fixtures. 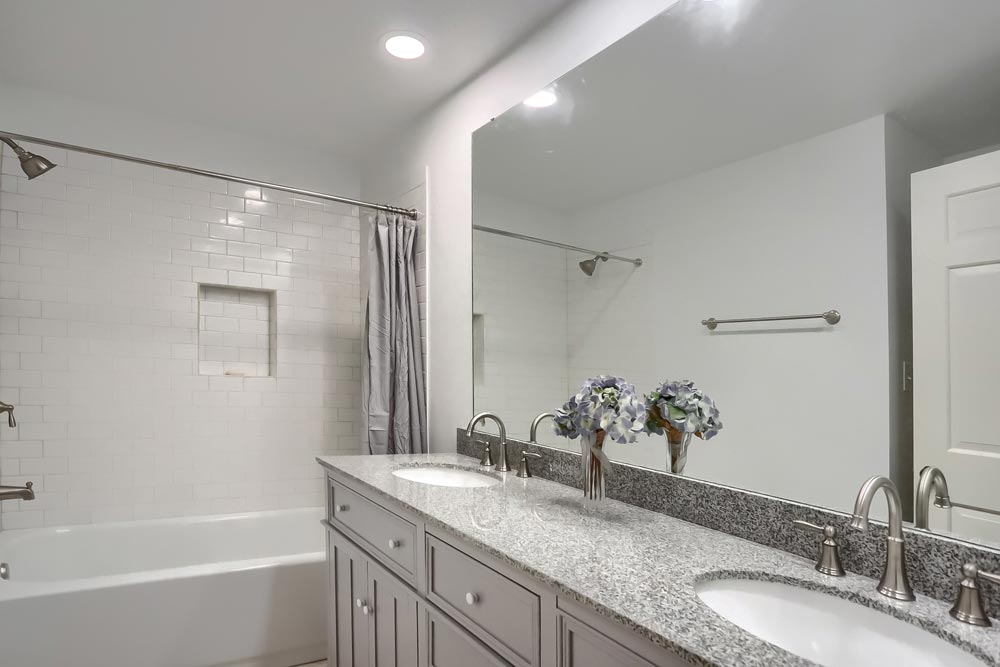 The home also has natural gas heat, public water and a semi-finished basement with laundry. It’s located a short drive from the Hampton Pool and only minutes from Hampton Elementary School.

More than two decades later, Knott knows his first impression of the house was the right one.

“We bypassed Fox Chapel. We could not get enough house for the money,” he says. “This was the best decision.”

Neighborhood: The township was settled around the time of the Revolutionary War in the late 18th century. It was originally called Tally Cavey. Many of the original settlers have roads named for them, including James Sample, Henry McCully and John McNeal.