The five-bedroom, craftsman-style home was built in 1912 by Montel Davis. 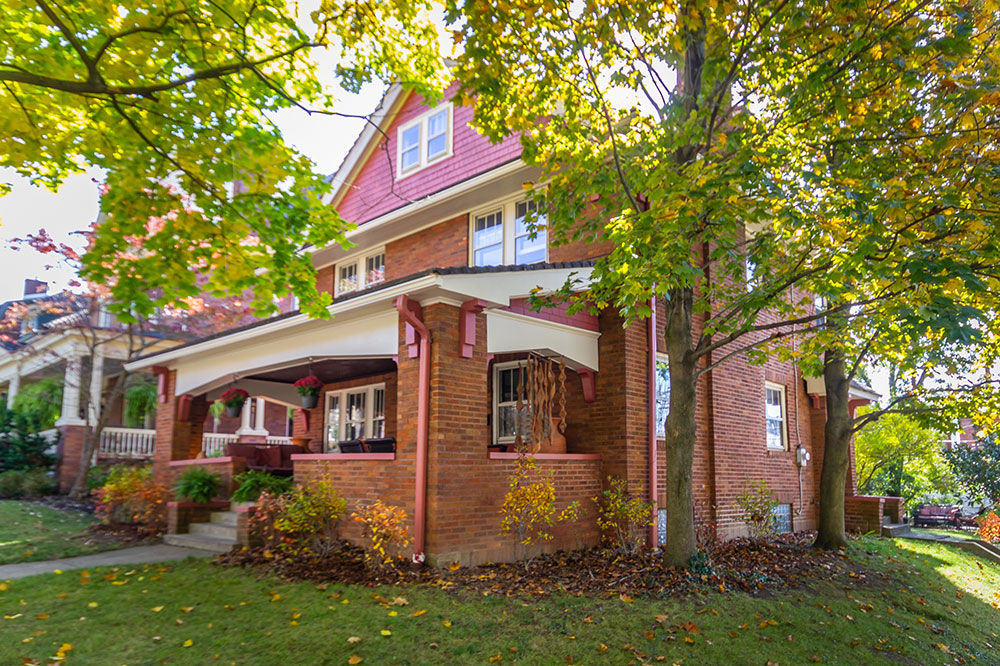 He grew up in the neighborhood with his nine siblings in a big, rambling house on the southeast corner of Wellesley and Mellon streets. His mom still lives in that house, which neighbors remember fondly for the hustle and bustle that emanated from it.

Although his life’s work as a senior political transition consultant has taken him to more than 40 countries, he always has thought of Pittsburgh as home. When he and his wife, Neneva, decided to settle here, they bought the house at 5800 Elgin St. in Highland Park. 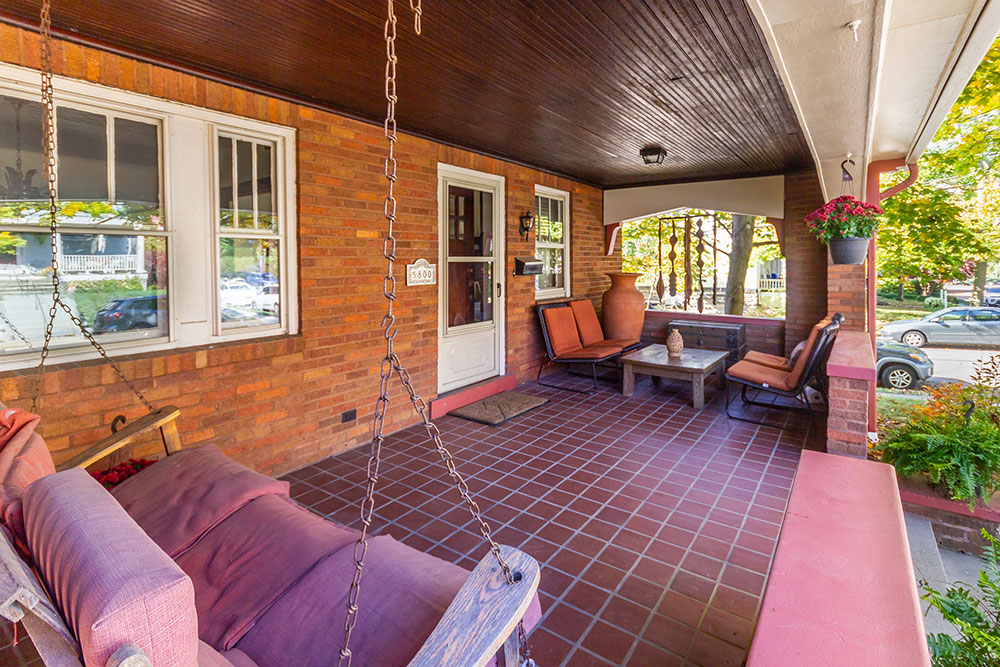 In doing so, Staresinic had the chance to nurture his love of Pittsburgh’s architecture. The house was built in 1912 by Montel Davis.

“He was a homebuilder by trade and built 43 houses in Pittsburgh before he built this one,” Staresinic says. “It was his last home and he built it for his family.”

The five-bedroom, two-bathroom, craftsman-style home housed Davis and his wife, their four daughters and two servants who lived on the third floor. More than a century later, the house, its history — and its stories — are still intact thanks to the faithful stewards who lived there throughout the years. 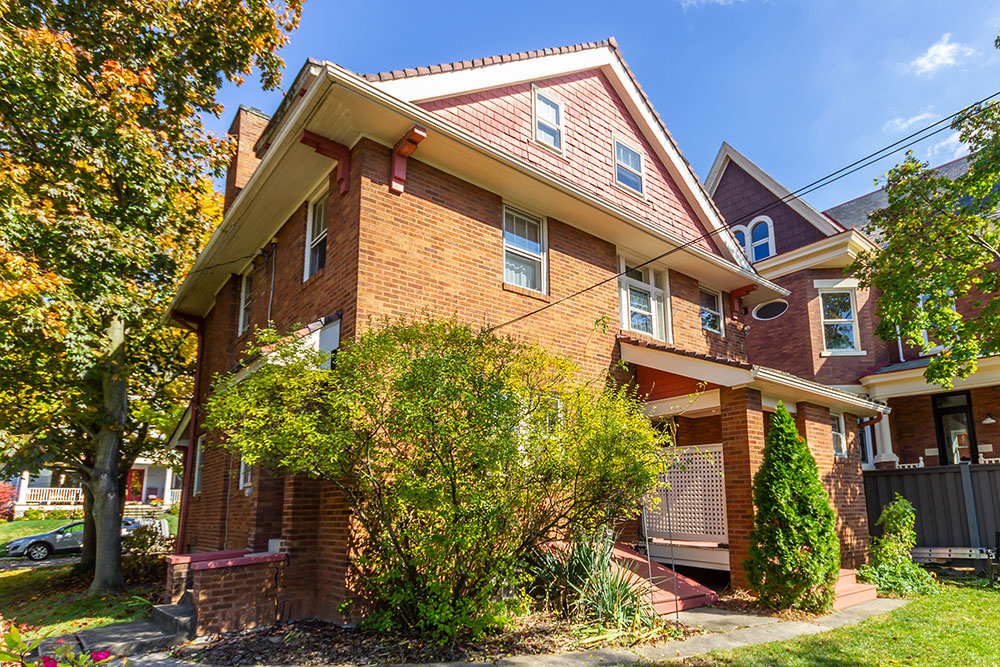 The all-brick exterior is adorned with original details, including a covered front porch, exposed rafter tails and deep, overhanging eaves painted in a rich terra cotta. House numbers carved in stone on the front steps speak to the home’s past.

“We had a house history from Carol Petersen,” Staresinic says. “She had done it for the owners before us. The archive is at Preservation Pittsburgh.”

The home’s roof tiles and floor porches were sourced from Ohio’s Ludiwici Tile Company, which is noted for creating roof tiles for the restoration of Downtown’s Allegheny County Courthouse.

“There are six surfaces on the tile roof of the home,” Staresinic says. “All of the tiles are similar, but the slopes and the design are all different.”

The detached garage was built in 1910, an unusual find because most homes of that era had carriage houses. The lot also is filled with several gardens featuring magnolia, flowering pear and ash trees.

“I planted more than 350 bulbs. They bloom all spring,” Staresinic says.

A hardscape patio and vegetable garden is enhanced by a dry-stack wall that is 50 feet long and almost 5 feet tall in some places. 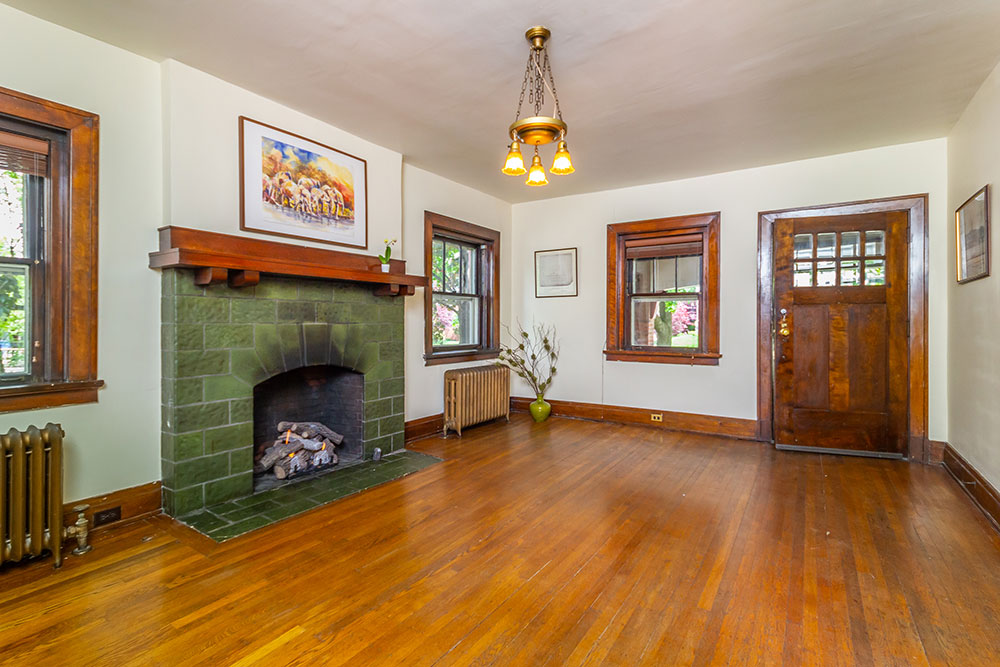 Inside, natural light flows through all 35 of the original three-over-one windows.

“They are all wavy glass,” Staresinic says. “We had them all serviced and the copper chains are all in working order. It was part of the historic preservation. We also had custom storm windows made and they are good for the next 100 years.”

The beautiful details are obvious as you walk into the living room. Among them are interior doors made by woodworker George Starz, whose work also can be found in the restoration of Baywood, the mansion at King’s Estate located just a few blocks away. 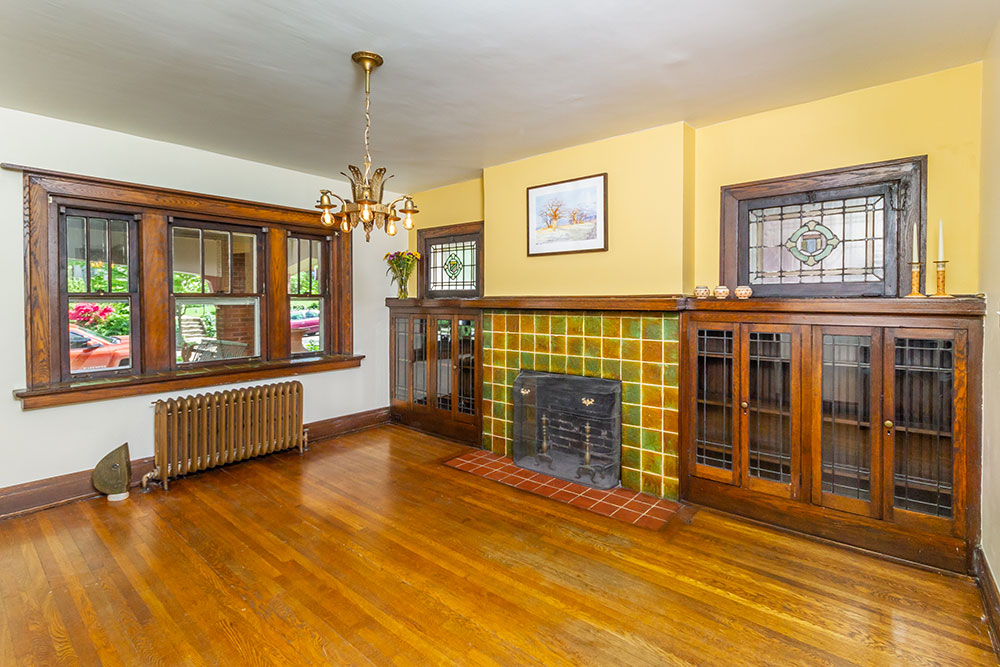 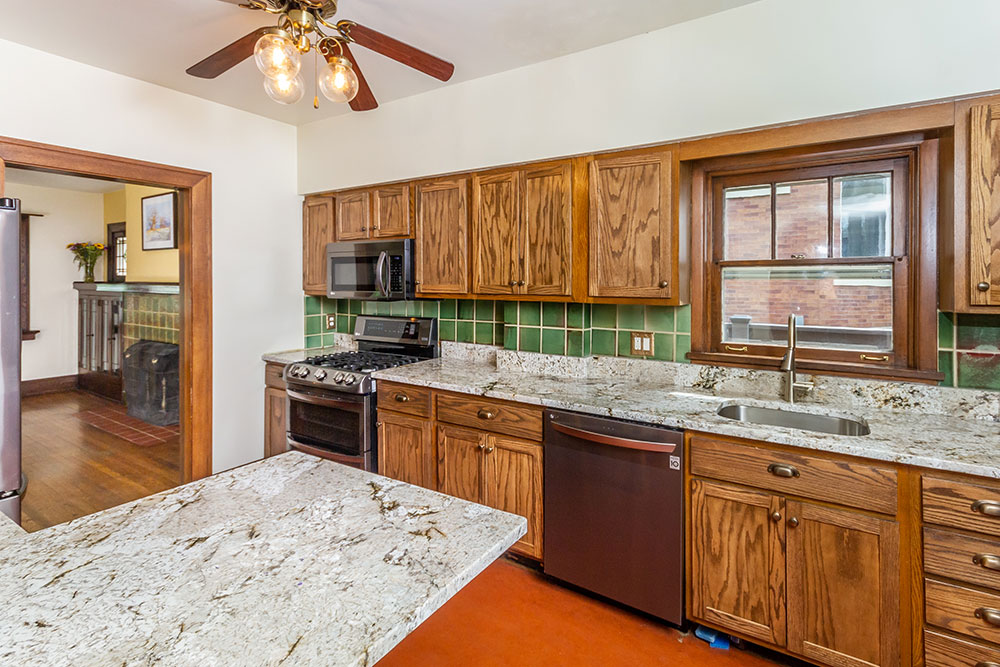 In the remodeled kitchen are shaker-style oak cabinet doors with hardware from England, granite countertops and stainless steel appliances. The kitchen has eco-friendly red marmoleum floors and a full pantry with oak shelving.

“There is an original ice door into the pantry,” Staresinic says. “I opened it up. It’s the same size as a block of ice.”

An extra room behind the living room is used as an office. It features a window with a direct entrance from the side — and it comes with a great story.

“After Mr. Davis sold his house in the ‘20s, a doctor moved in,” Staresinic says. “He was instrumental in solving the great typhoid crisis in Pittsburgh. This doctor was on City Council. We found two old medicine bottles in the garden.” 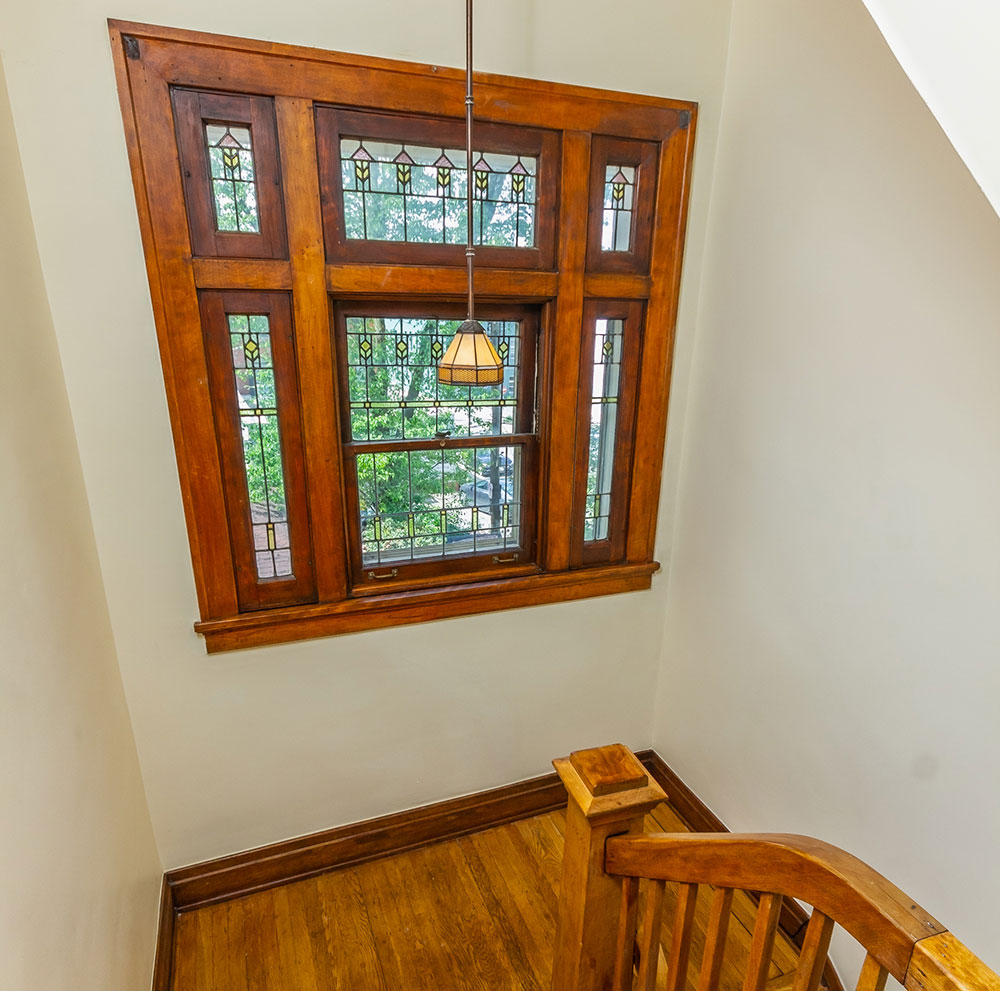 A lovely staircase takes you to the second floor, where a mid-rise landing features a beautiful seven-panel stained glass window. The handrail and spindles are exceptional, with warm wood that evokes a true craftsman spirit.

Three bedrooms (two with fireplaces) and a full bathroom fill the second floor. Hardwood floors, gorgeous panel doors and loads of charm are at every turn. The remodeled bathroom is simple in shades of white, with a tub/shower combination, pedestal sink and brushed nickel fixtures.

One more level up are two dormer bedrooms, including one with long bookcases installed by the previous owner. 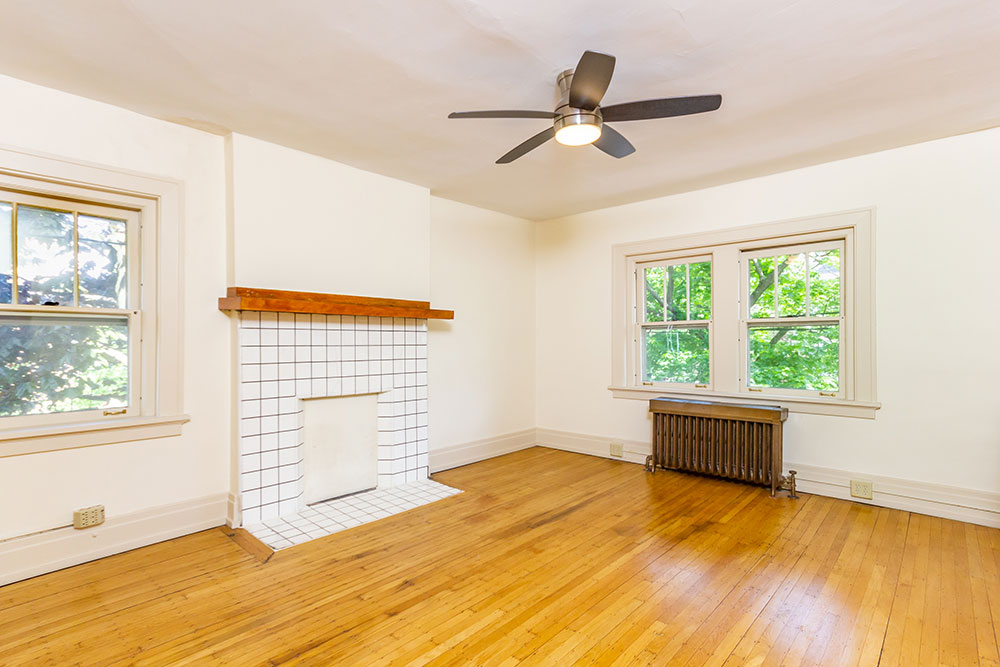 “Arlene Taylor, she was a librarian,” Staresinic says. “She actually wrote textbooks about library sciences and was a professor at the University of Pittsburgh. The bookshelves are 40 linear feet.”

The home has radiator heating and a recently installed boiler, as well as a new water heater. The laundry is located in the unfinished basement.

“The basement has a steel beam with a stamp from J&L Steel. It spans from the front to the back of the house,” Staresinic says. “We played ping-pong down there.”

Even now, Staresinic remains amazed by the house his family called home.

“It is remarkable to have an intact house inside,” he says. “We worked hard to preserve and restore that. It’s been a great home.”

Drawing on her years of experience covering the region’s real estate industry, Rosa Colucci’s Hot Property will offer an inside look into unique and historic homes currently on the market. Each week, Hot Property goes behind the for sale sign to share the story of a special Pittsburgh-area home. Four times a year, Hot Property gives an in-depth look at the region’s real estate market in Pittsburgh Magazine HOME, tracks housing prices and sales and details where the hot properties can be found. Rosa can be reached at onecordovaroad@gmail.com.

About: Highland Park (hpccpgh.org)
Population: 6,395
Planes, Trains & Automobiles: A 25-minute commute to the airport. Daily transport via Port Authority. East Busway is 2 miles out. City bike lanes on major arteries. Street parking.
Schools: City of Pittsburgh, featuring extensive magnet programming including the award-winning CAPA in the heart of Downtown. (pittsburghschools.org)
Neighborhoods Some of the city’s most prominent residents have called Highland Park home through the years, including Alexander Negley, who originally purchased the property. It features a historic city park of the same name and a reservoir that supplies the city with clean drinking water. Highland Park is also home to the Pittsburgh Zoo and PPG Aquarium. The tree-lined streets feature a historic district and the Bryant Street Business District.