The four-bedroom home is filled with original details. 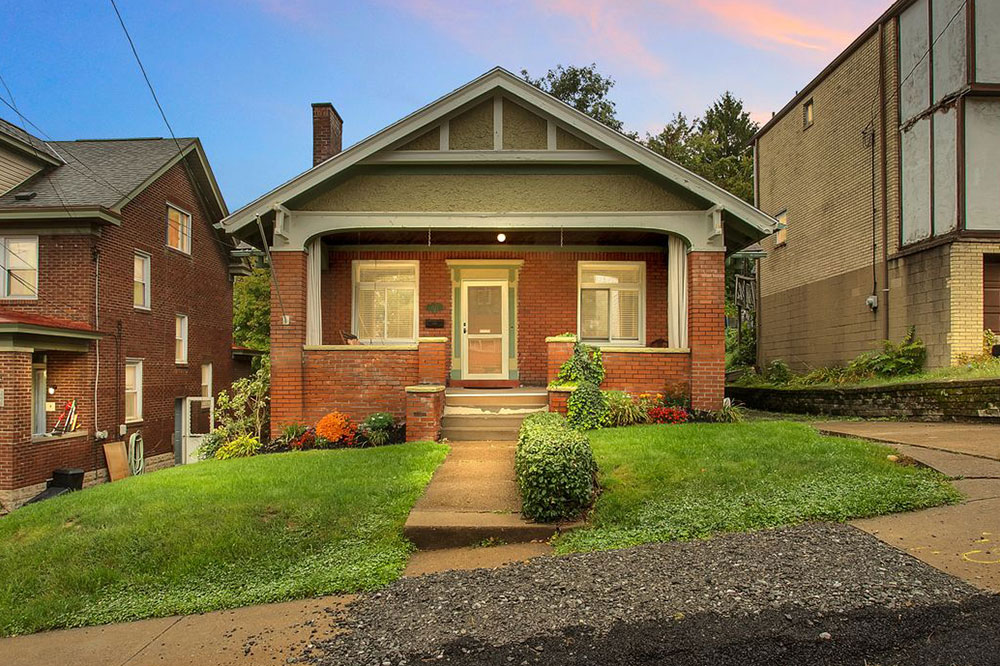 Becky Thurner is a storyteller. She uses her camera to capture images that inspire, delight — and say what words can’t. So it was only natural that she fell head over heels for a quaint Cape Cod-style home in Beechview filled with picturesque details.

At the time, she was on an exhaustive home hunt alongside her Realtor, Jeff Stephan. Before he opened the front door to 1522 Westfield St., Stephan asked her to keep an open mind.

That’s because inside, the home was filled with powder-blue carpet, burgundy velvet curtains and other finishes that stuck it in a time warp.

Thurner, however, only focused on one thing.

“The door opened and I saw those coffered ceilings and said, ‘This is it,’” she says. 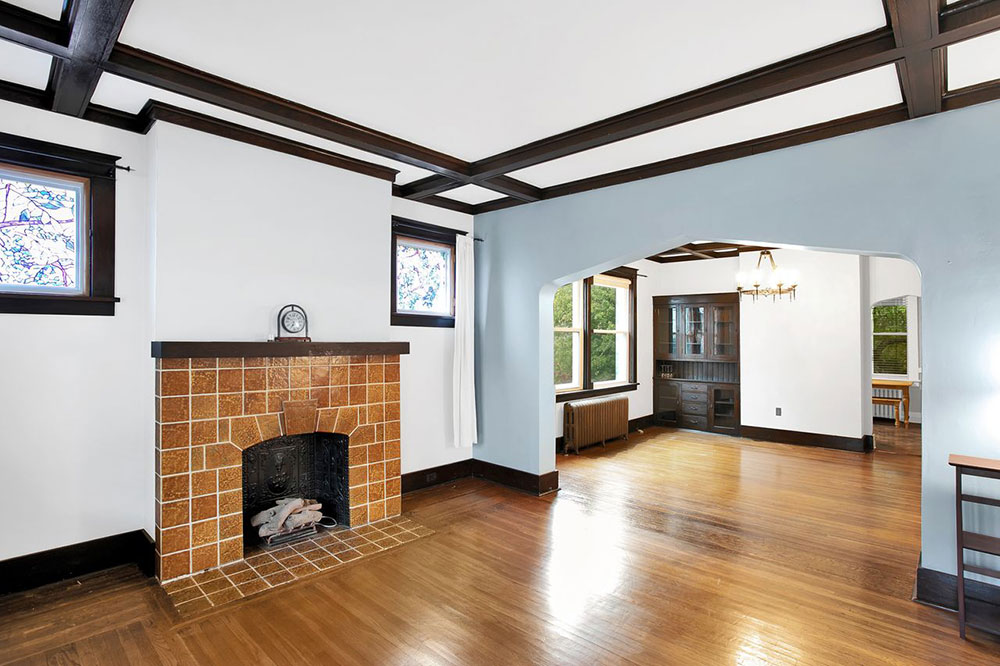 Now a married mother with a full brood, Thurner and her family have decided to sell the home and move over the city borderline into a neighboring school district.

The residence is a comfortable 2,200 square feet, with a nice front porch and a mostly brick exterior. It was in the hands of the Jackowski family for 45 years before Thurner bought it. The former homeowners kept a lot of the original details intact, and Thurner says she had a great time unearthing hidden gems, such as original wood floors with herringbone corners. 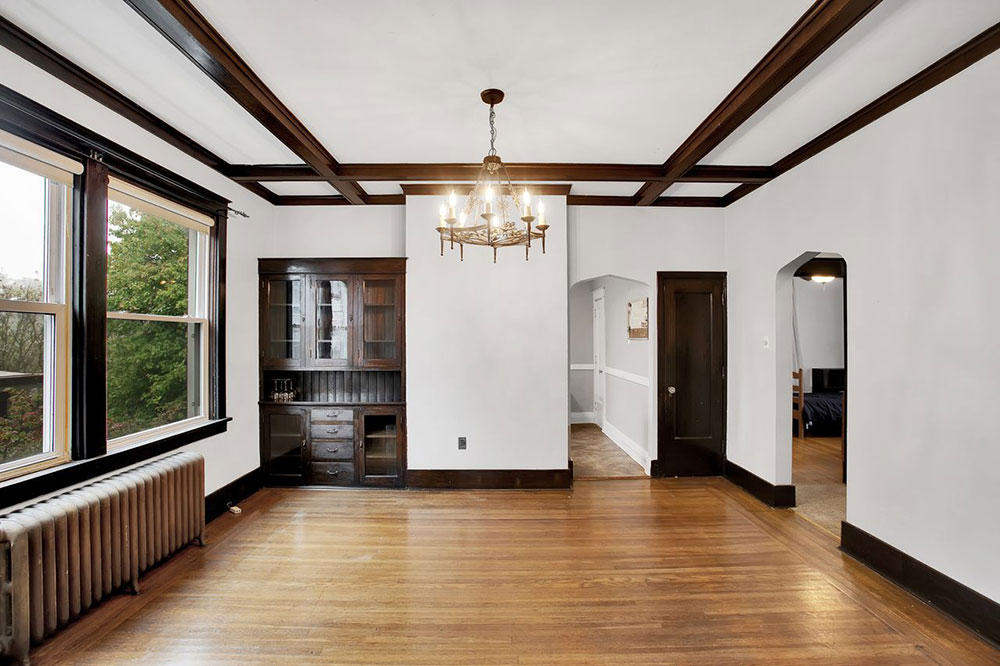 Framed by the original trimwork, the front room is 15-by-14 square feet and has a lovely gas fireplace. The room opens into the dining room, where the coffered ceilings continue. There is also an original built-in china closet in the corner and a beautiful brass open-arm chandelier.

“I just love it,” Thurner says.

The room leads into the kitchen, where a renovation became necessary after the refrigerator went south. Thurner says she removed the acoustic tile drop ceiling (it was painted powder blue) and replaced the cabinets. New appliances, vinyl tile, countertops and a fresh coat of paint finished it off. 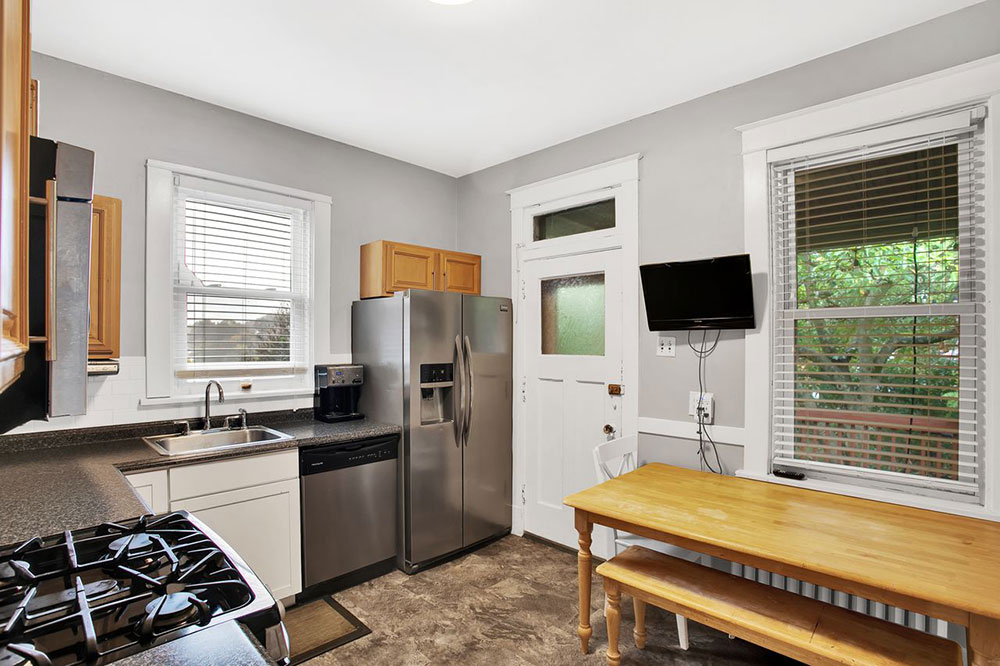 Also getting a makeover was the home’s ceilings, a common repair for a home built in 1925.

“We have systematically fixed every ceiling in the house,” Thurner says. “We took several rooms down to the beams and replaced them with drywall. We veneered the bath. There were a lot of old cracks and damage repaired.”

Because the home is Cape Cod-style, it features two full bedrooms on the main floor. The 12-by-14 square-foot, light-filled spaces have original hardwood floors and large windows. 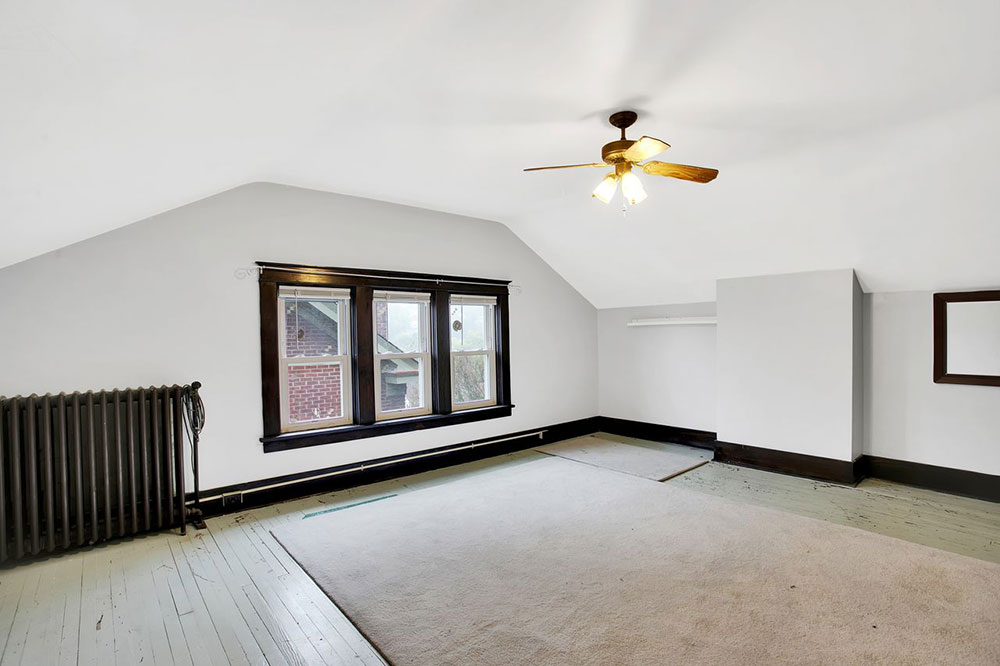 Formerly home to a pink pedestal sink and pink linoleum, the half-bathroom was transformed into a chic, classic space by wainscoting, new fixtures and a new floor.

The second floor is a half-story space with a large 15-by-18 square-foot room, plus a small room that could be configured as a custom closet. It has a lot of storage.

“The interior of that room was all cedar shingles,” Thurner recalls. “When I was pregnant with twins, I tore them all off, patched the holes and painted the room.”

She laughs at the thought of tackling that today.

The second room is 9-by-12 square feet and has a dormer window. Before it was her son’s room, it was Thurner’s office. 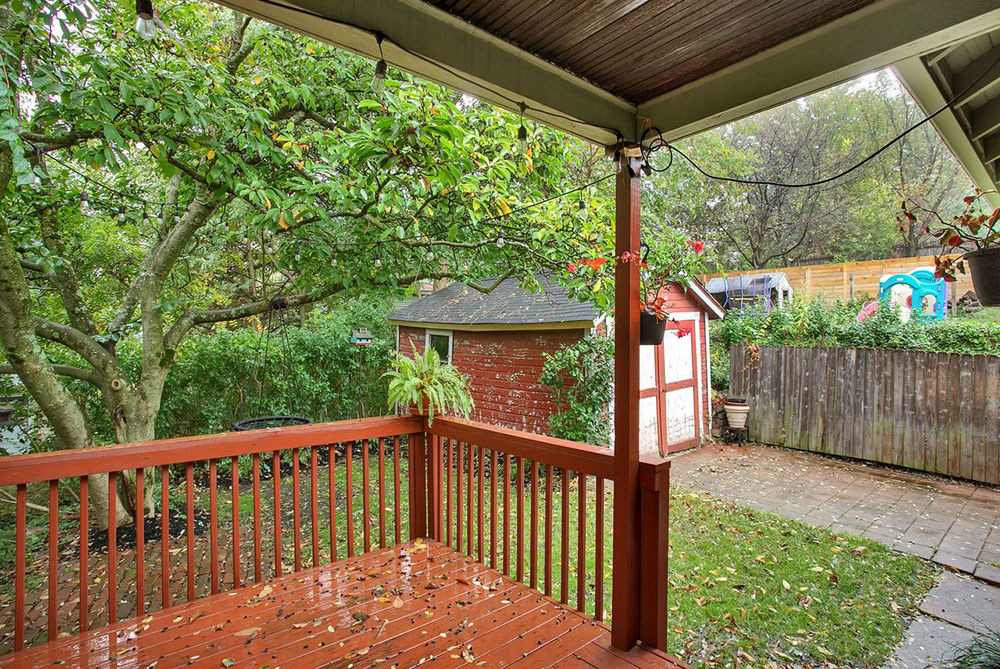 The backyard, including a stone patio, is charming.

“It is so sweet back there. It is filled with all of Mrs. Jackowski’s artwork,” Thurner says. “There’s a big magnolia tree back there with a nice tree swing. It stays nice and cool.”

Thurner adds that because the home only has three steps from the front walkway,  it’s very convenient for anyone with mobility challenges or who desires one-floor living.

Also convenient is the neighborhood’s location.

“The spray park opened in 2011. There is a community garden where the old pool was,” Thurner says. “We now have the Las Palmas grocery store, the church with a Spanish-speaking mass and a wonderful Latino community.”

She calls the diversity of the community an asset.

“Beechview is dipped in culture. It is a homey city community. We met such sweet, kind people,” she says.

Then there are the charming handprint silhouettes on the basement’s ceiling tiles. Thurner says the former owner used to have visitors outline their handprints on the wall and sign them. The signatures date back to the 1950s.

“People would stop at the home to look for their handprints,” Thurner says. “There were also messages on the wall. One said, ‘We miss you Pap.’ It was so sweet.”

Editor’s note: Becky Thurner is a freelance photographer for Pittsburgh Magazine, as well as other local and national publications.

Schools: City of Pittsburgh, featuring extensive magnet programming, including CAPA in the heart of Downtown. (pittsburghschools.org).

Neighborhood: Diverse and connected by Broadway Avenue, Beechview is filled with shops and restaurants. It also is home to the steepest street in the country, Canton Avenue. At 630 feet long, with a 37% grade, the street was featured in a commercial for Audi to showcase the climbing power of its Audi Quattro.