Jeff Cook’s grandparents raised 10 kids in the house next door to the row house, which once belonged to his aunt. 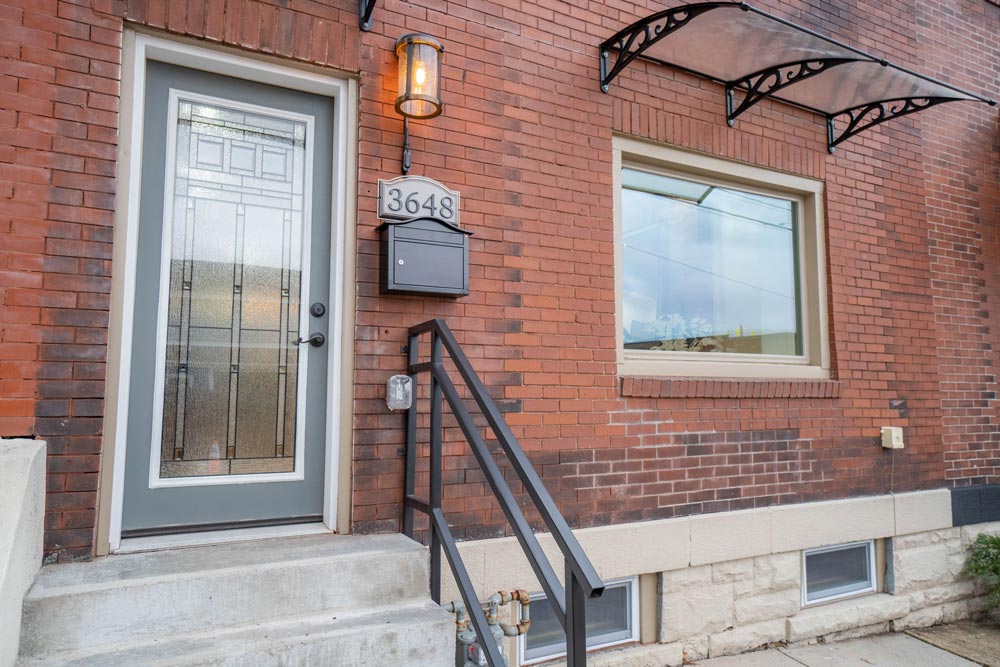 One of the best things about old Pittsburgh houses is the stories that go with them.

Take 3648 Mintwood St. in Lawrenceville for example. Joel Cook bought the row house, built in 1890, after his aunt asked him to get it back into the family.

Aunt Edna and Cook’s mom actually grew up in the home next door. His grandparents raised 10 kids in the three-bedroom row house.

“Those were different days,” Cook says. “My Uncle Gooch grew up here and married my aunt. She just moved right next door into this house.”

Cook, a lifelong carpenter, and his partner, Jeff, set about rehabbing and restoring both homes more than 15 years ago. They lived at 3648 for many years. Several years ago, they sold the home that had belonged to Cook’s grandma. And now, they have decided to sell their row house as well. 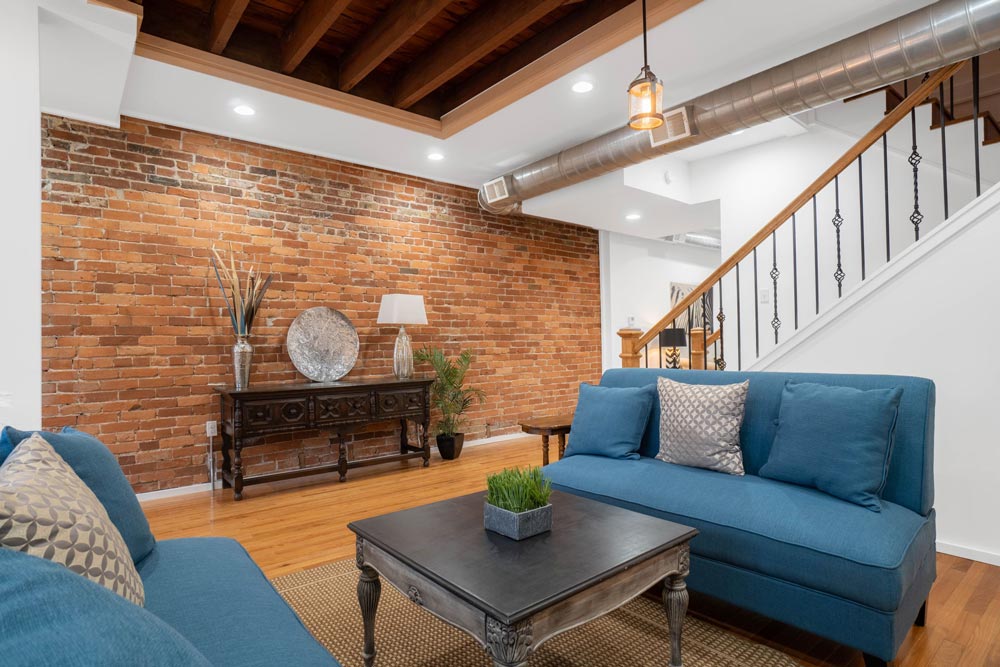 Like so many row houses in Lawrenceville, this home once featured “paneled walls, drop ceilings and ugly carpet,” Cook says.

The couple opened up the 1,608-square-foot home by tearing out the drop ceiling as well as part of the ceiling itself, exposing the joist and beams in several rooms and boxing them in.

“Me and my partner did all of the work from top to bottom,” Cook says. “We totally rewired the house.”

They also installed an exposed, galvanized HVAC; ¾-inch, quartersawn oak floors; and a new bannister. They were able to keep the beautiful fireplace facades, while any exposed brick was painstakingly repointed by Jeff. 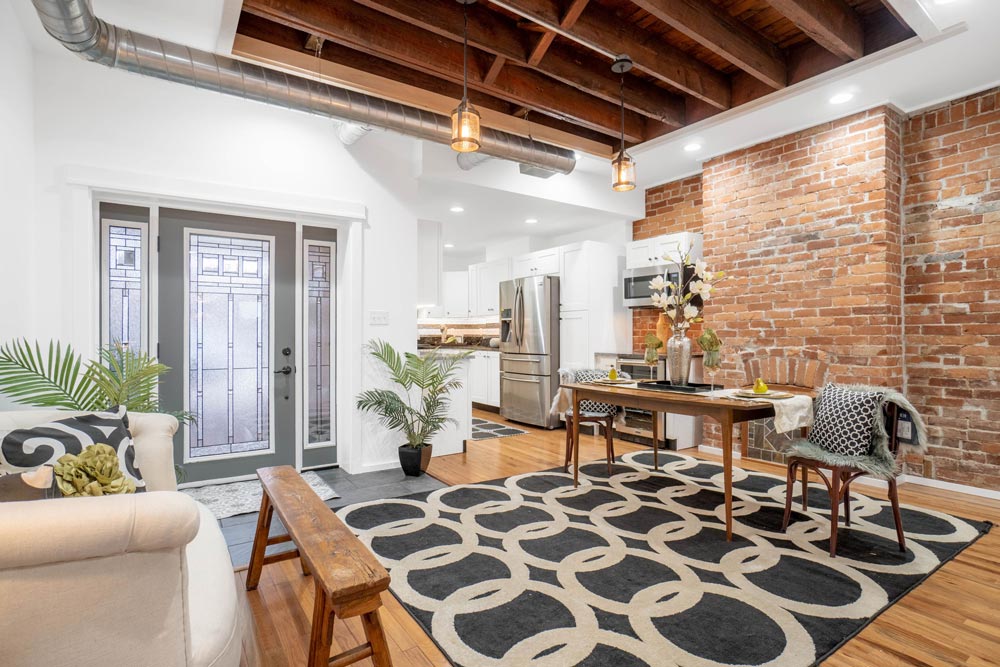 An old window at the back of the home was torn out and replaced with a three-panel door that matches the front entry and leads out to a spectacular back patio. 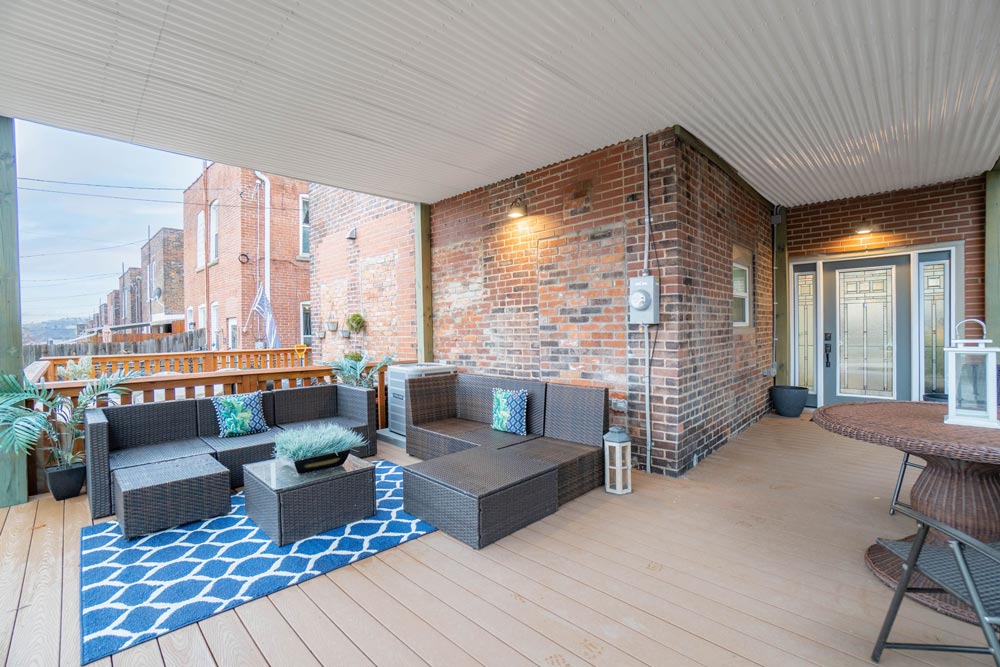 Large and completely covered, the yard has a pair of raised garden beds and a two-car parking pad — residential gold in a neighborhood known for tight streets. 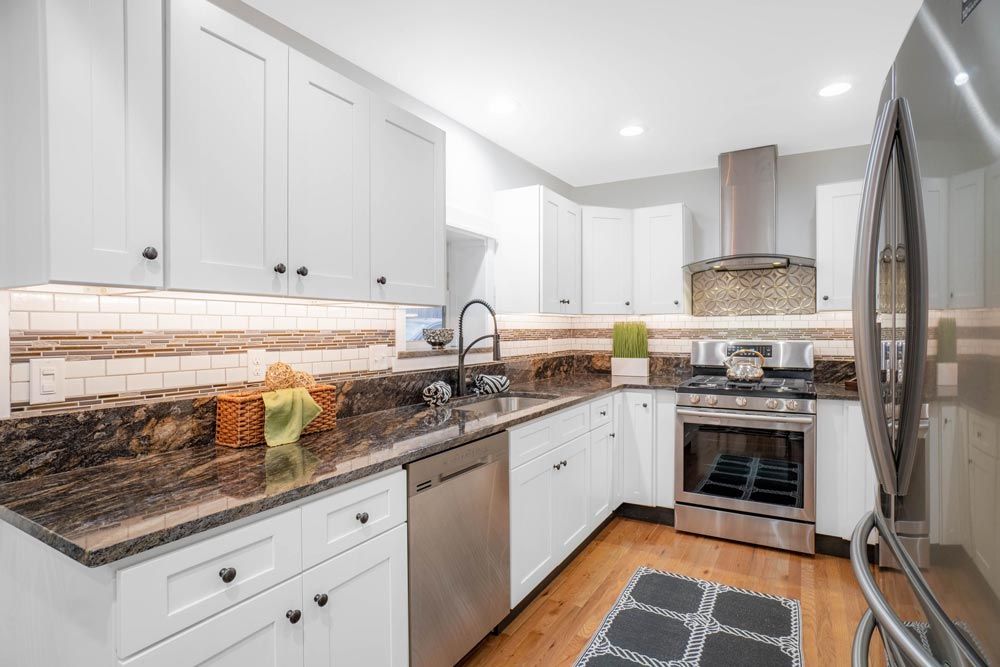 Back inside, the kitchen is nothing to sneeze at. It is packed with loads of white shaker-style cabinets and stainless appliances, including a feature-rich, stainless steel range, dishwasher and statement hood. Granite countertops and a glass tile backsplash in horizontal stripes visually widen the space.

Upstairs, the original layout once featured three bedrooms and one bath, including a captive bedroom. During renovation, the couple split the difference and created two ensuite bedrooms instead. 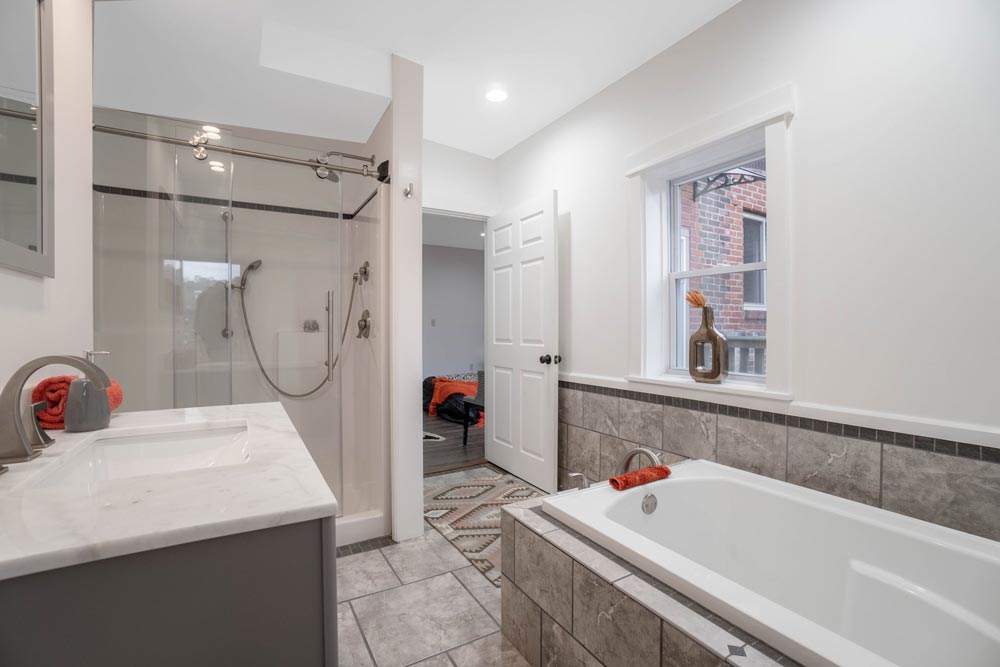 The captive bedroom was flipped to a light-filled bathroom. It features new tile walls and floors, a spacious walk-in shower and a soaking tub. There is a large, gray vanity with white stone counters and brushed nickel hardware. 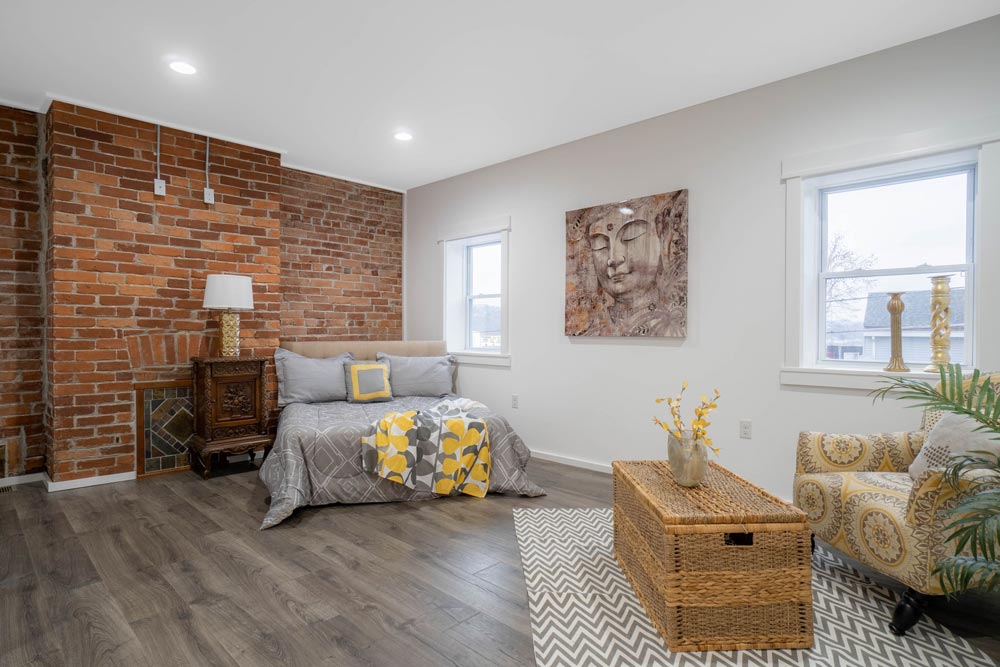 The bedroom was also made into a showstopper. Exposed brick walls and an original metal fireplace shield provide drama, while two large windows have views of Downtown. Pergo flooring was installed here and throughout the second level.

On the other side, the rear bedroom has an exposed brick wall and ensuite bath with a tub/shower combo. That bedroom opens to a rear deck that was built on top of the lower deck. It’s a great place to hang out. 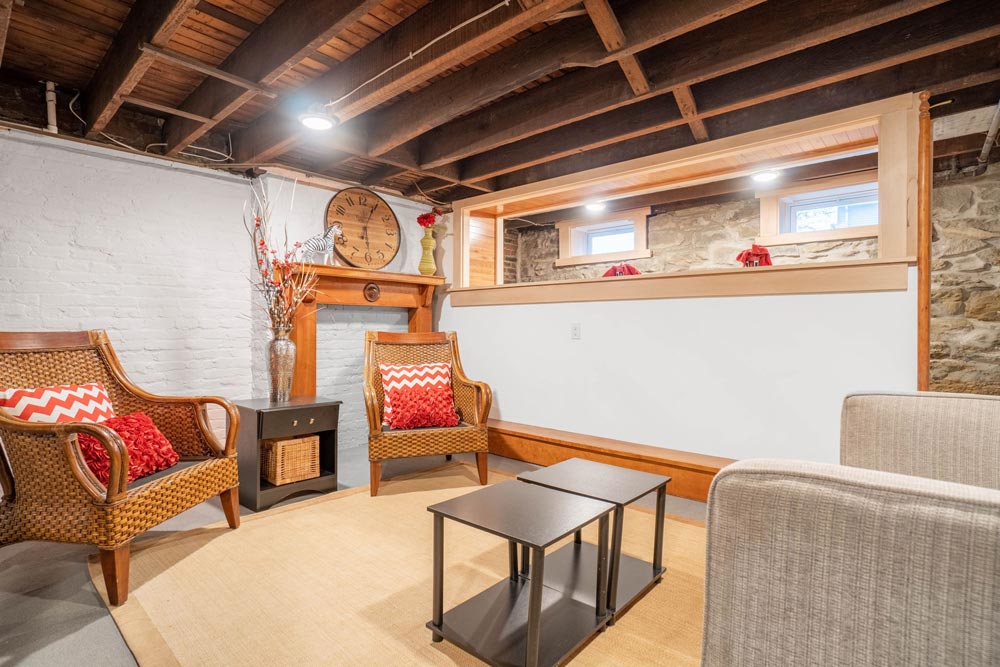 Down below, the basement was refinished with cleaned and repointed stone, followed by paint. There are a lot of other nice touches such as a framed window and wine bar.

“We took our time and put our heart into that house,” Cook says. “We lived in there. It was dusty but it was great.”

The couple also loved their time in the neighborhood. Before the pandemic, they went out to eat often. Cook also loves to just walk around. 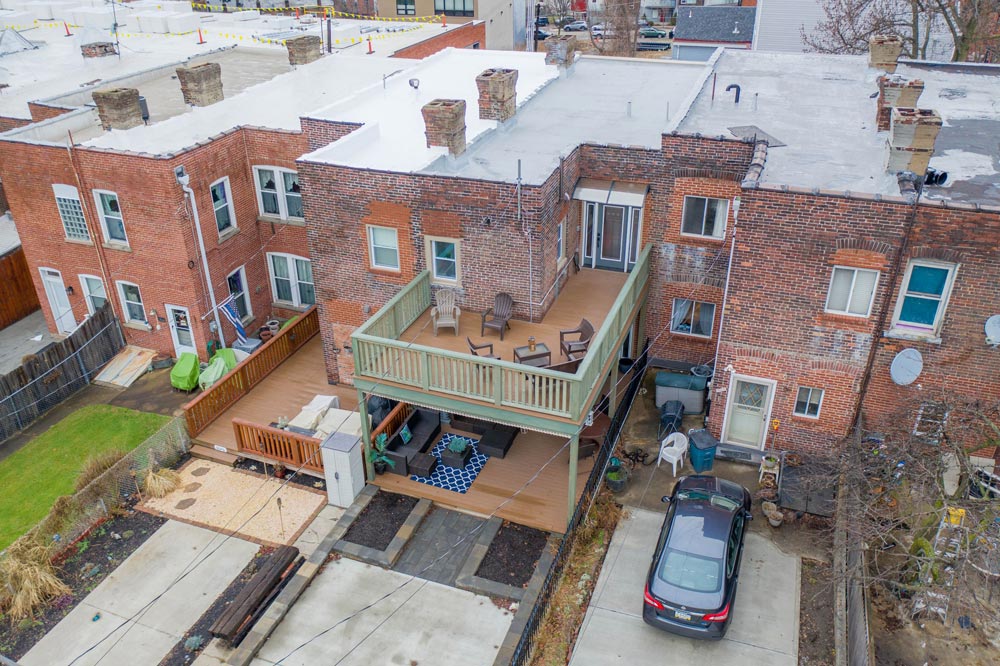 “I used to take long walks in Allegheny Cemetery and around the neighborhood,” he says. “Everyone was so friendly. We would sit in front of the house and watch fireworks at Arsenal Park.”

As for his original extended family, he says they are still carrying on.

“Out of the original 10 children, three are still alive,” he says. “Aunt Adrienne is 88, Uncle Tom is 90 and my Uncle Dick is the oldest. They are making it through the pandemic all right.”

Schools: City of Pittsburgh, features extensive magnet programming including the award-winning CAPA in the heart of Downtown.  (www.pittsburghschools.org)

Neighborhoods: Founded in 1814 and comprised of three distinct neighborhoods, Upper, Central and Lower Lawrenceville. The three neighborhoods combined roughly span Butler Street from 38th to 62nd streets. There is a historic district, movie theater, many acclaimed restaurants and the historic Allegheny Cemetery as places of interest.