Home of the Year: Tuscan Dream

The 2013 Home of the Year winner in the New Construction category is a dream home in a dream location. Tuscan details abound inside and out, designed to remind the homeowners of an unforgettable trip to Italy. 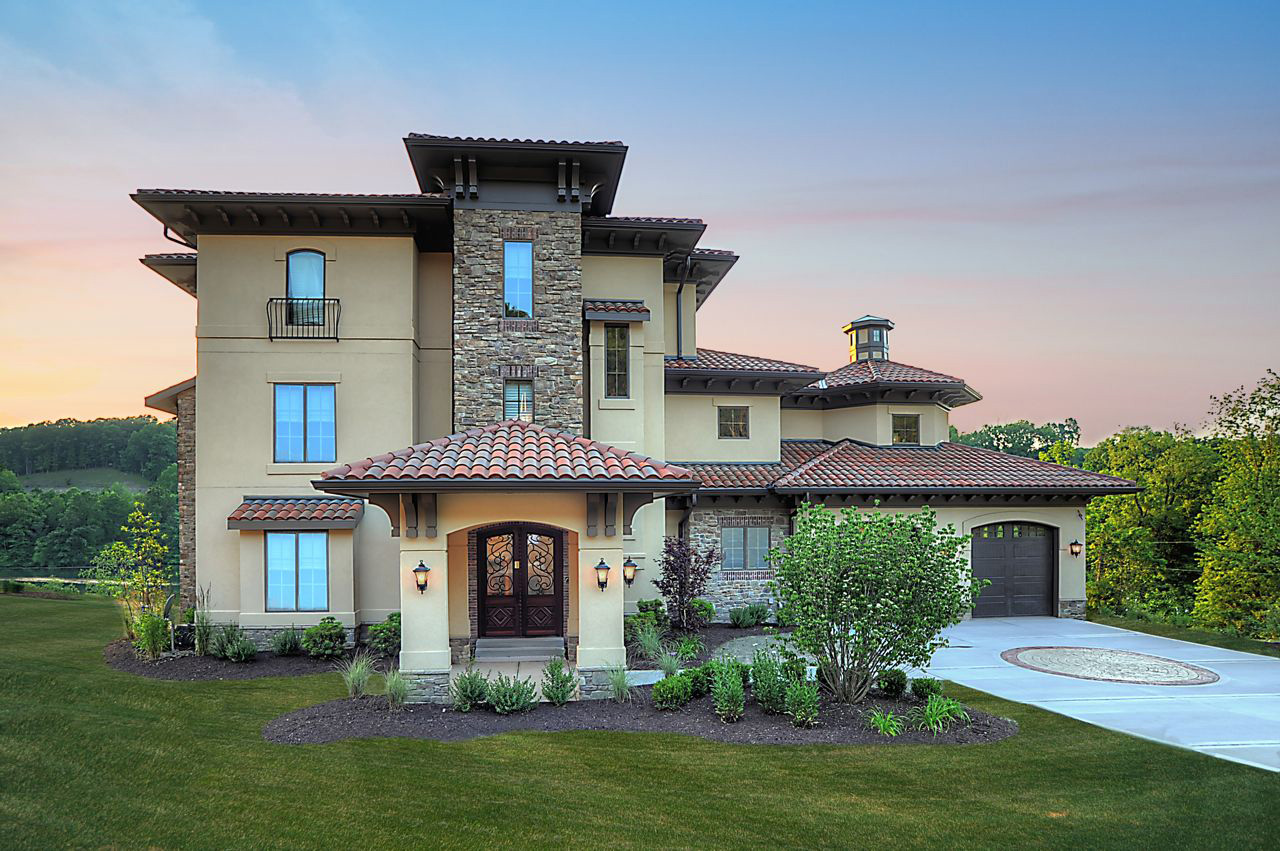 "My wife and I honeymooned in Italy. We loved Tuscany and the architecture of the homes there — so a Tuscan-style house brought it all back to us,” says the homeowner, who resides in Pine Township’s Lake MacLeod neighborhood with his spouse and children. “Plus, [my wife and I] grew up in Erie, so having a home on a lake is perfect.”

Originally, this construction was going to be a spec house for builder Jeff Martin of Primrose Homes. But, Martin says, “before I could dig it, I sold it. As soon as the owners saw the plans, they knew this was the house for them.” 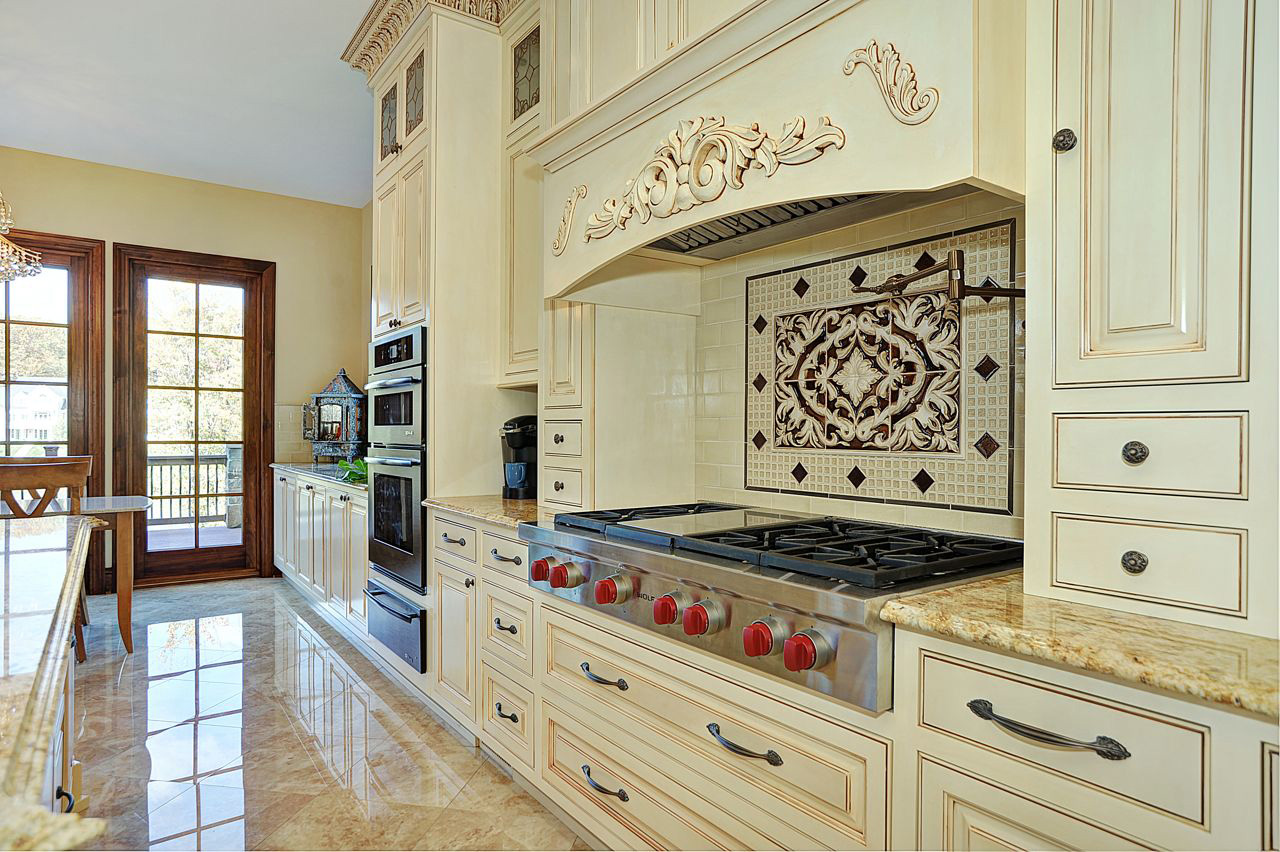 Martin had been working on the plans with architect Timothy J. Morgan, and both were excited about the prospect of building a home in a style rarely seen in Pittsburgh. The region’s challenging landscape first inspired the pair to choose a Tuscan design.

“The home’s site is very challenging and hilly. It’s a steep grade change from the street to the lake at the rear of the home,” Morgan says. “Our original thought was to build a contemporary house, but then we thought a Tuscan style would be a natural fit because of the similar terrain in Tuscany.”

The spot is also compact, with narrow lake frontage, adding to the challenge. But, Martin says, “I like designing to fit topography, to embrace it rather than fight it. So, instead of spreading out horizontally, we went up vertically.” The result is a four-story abode. 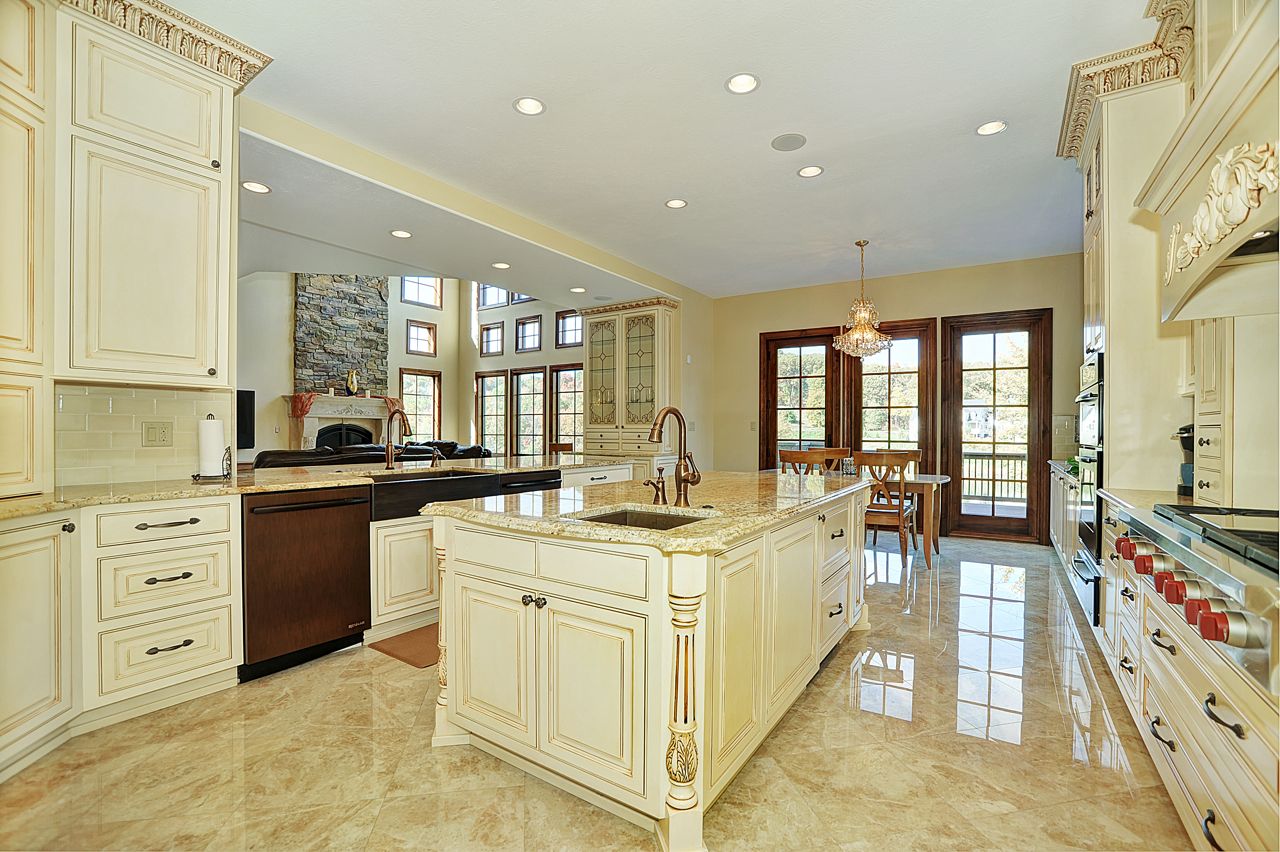 “While it’s a home of generous size, it doesn’t feel that way because everything is stacked up instead of spread out,” the owner says. “So you have the coziness of being next to the family — which is great when you have three small kids.”

Tuscan details abound inside and out. In addition to the warm exterior cream-color palette, there’s a Spanish tile roof, generous use of stucco and stone, exposed wood beams, iron railings, 5-inch-wide solid maple plank flooring, chimney caps, and brackets on the eaves. Perhaps the most striking architectural details are the doorways. Each is arched, and there are even arcs in certain wall spaces, which the homeowners plan to eventually highlight with complementary art. 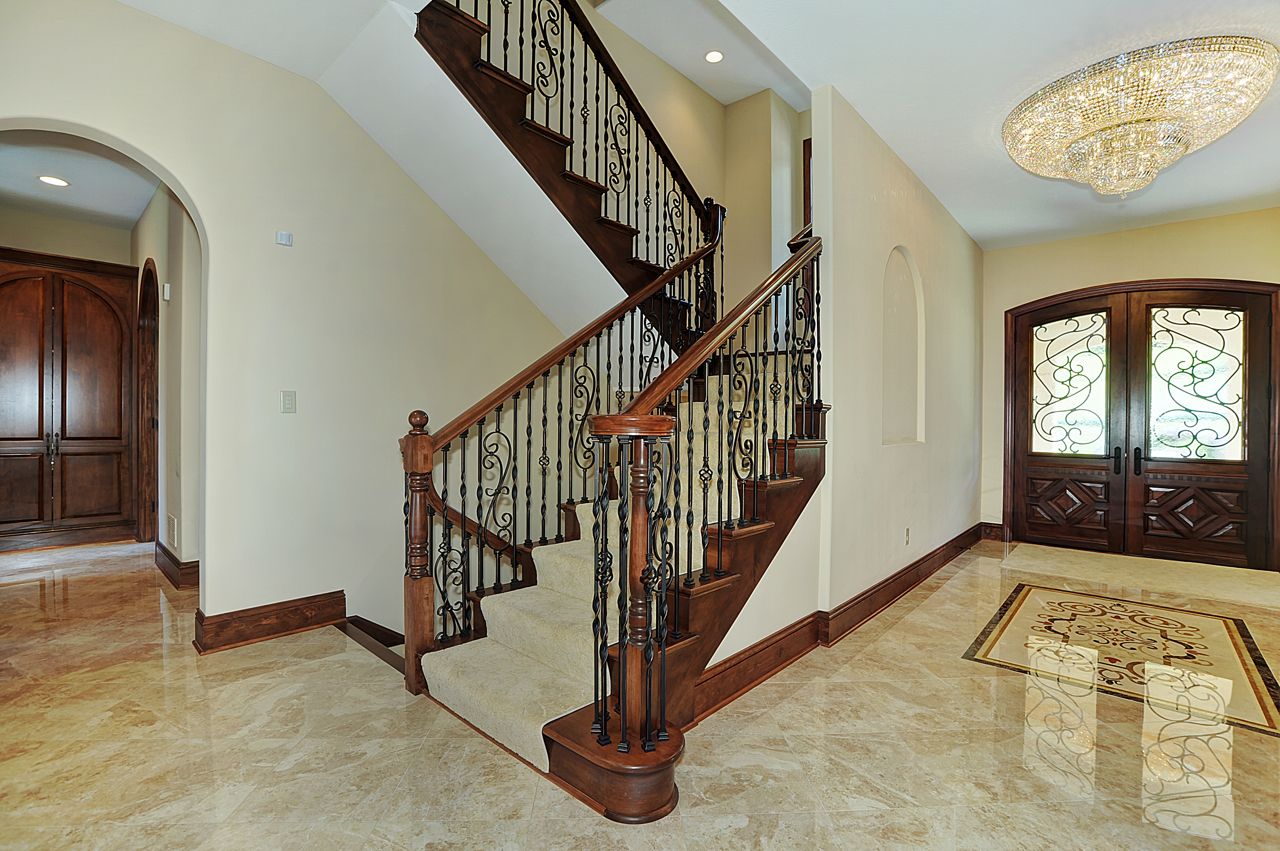 Martin and Morgan note that the doorway design is just one of the home’s many rare characteristics. The place features a two-story garage — each level designed for two cars, with the top level entered from the front and the lower level entered from the rear — and is certified to the 2009 National Association of Home Builders Green Building Standard at the Gold Level (Martin is a Certified Green Professional homebuilder). Because the home has four levels, it’s equipped with an elevator that stops on each floor — though the owner admits it’s hardly used.

Every level serves a unique purpose and has its own feel. Guests arrive on the main floor, pulling up to a portico that grabs attention when spotted from a distance.

“[It] gives an inviting transition from the outdoors to the indoors, and it’s fairly unusual in Pittsburgh,” says Morgan. 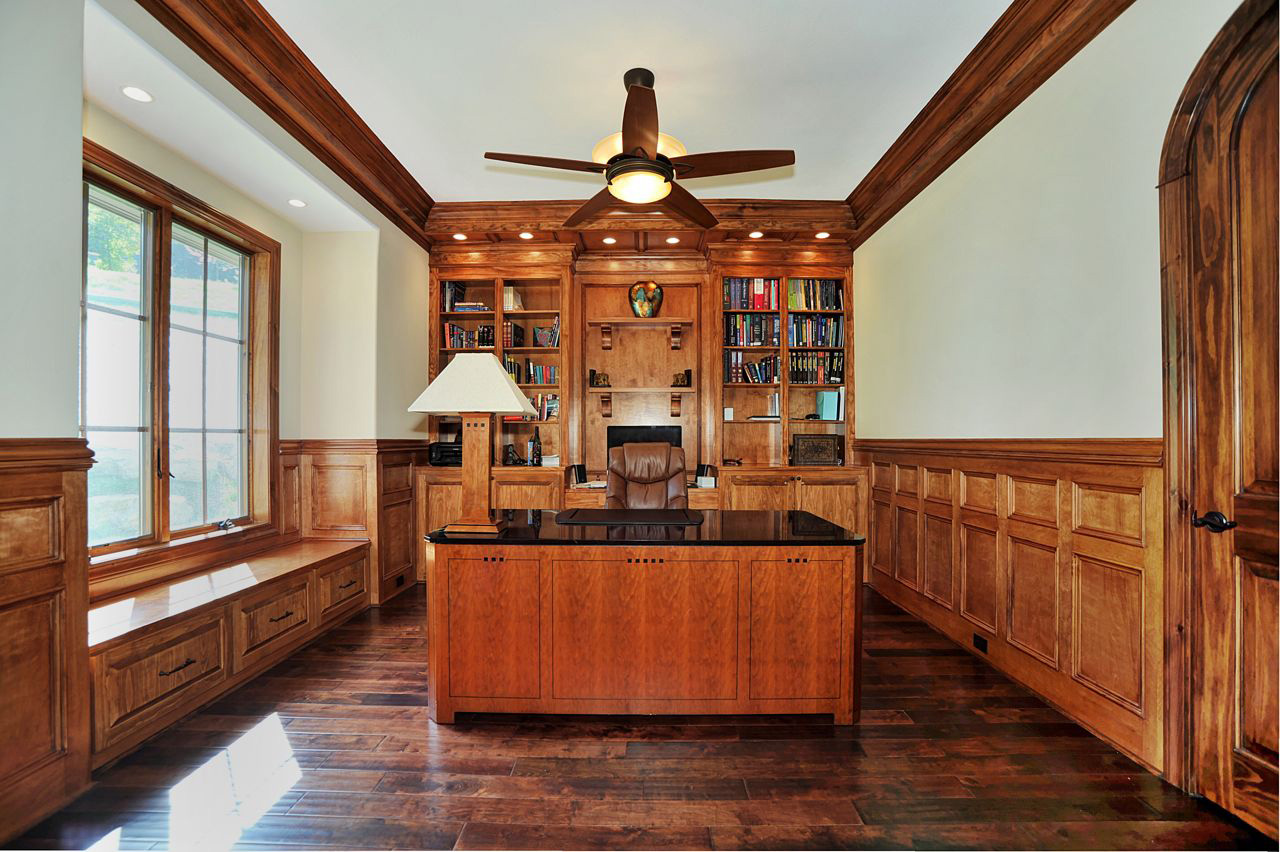 Just inside the front entry is one of the home’s three marble inlays, designed with the wife’s help.

“The inlays are a throwback to some of the things we saw on our travels in Italy,” says the homeowner. “They add color and drama, and help break up the pattern of the tile.” The hallway also features one of two Schonbek crystal chandeliers.

The center of the home is highlighted by a distinctive “octagonal rotunda, which runs through all four levels [and] is really the backbone of the plan,” Morgan explains. “Everything radiates off that center of that octagon; it’s used as a circulation space, but also for orientation. You can see it from almost every room, so you always know where you are.” 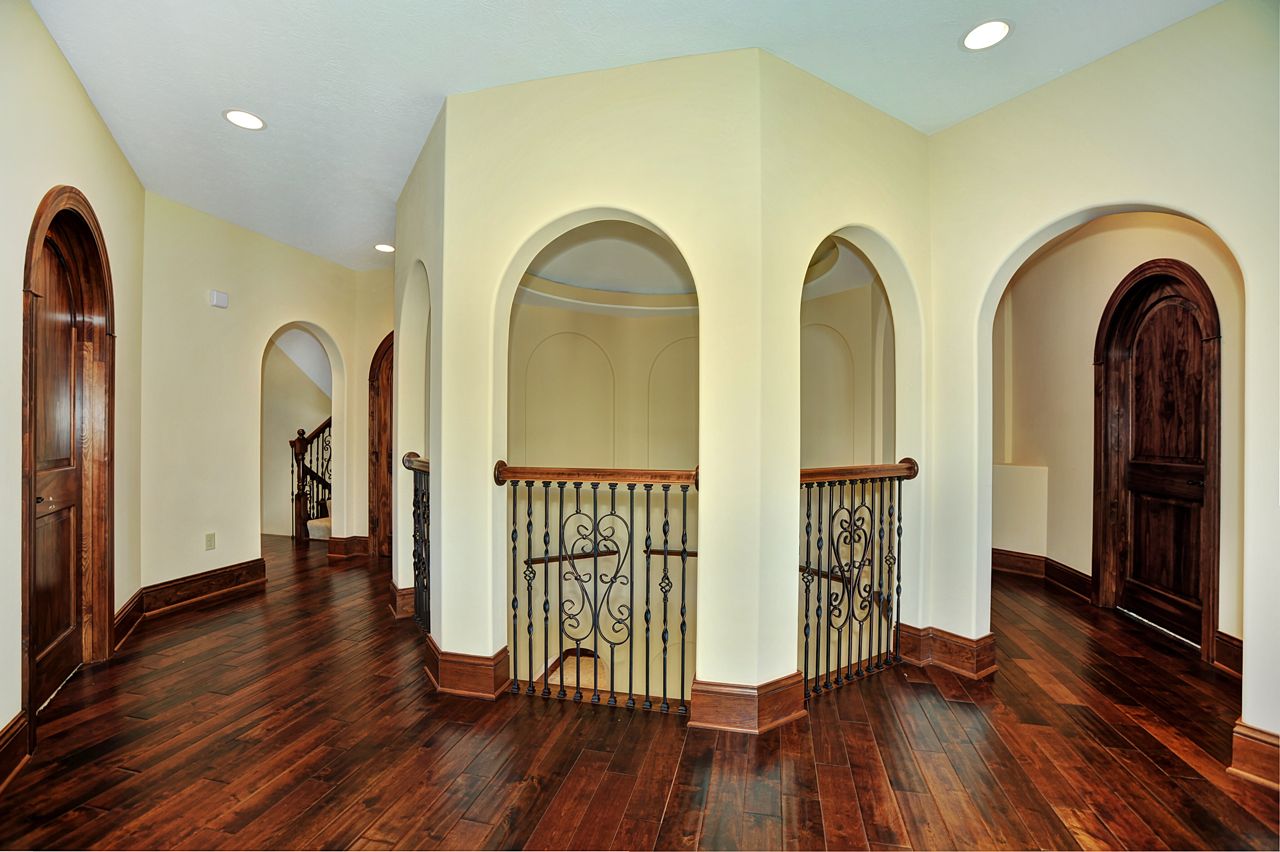 “My wife had a clear vision of [her kitchen],” the homeowner notes. “She wanted a particular look and locked in on what she wanted — from the antique white painted and glazed cabinets, the color highlights and cabinets all the way to the ceiling.”

Actually, interior designer Andrea Sulia says the kitchen is a perfect example of the wife’s design sensibility. She says it’s “the most detailed kitchen design I’ve ever worked on.” The homeowner was especially impressed by the custom cabinetry, built by Heart of the Home Designs. 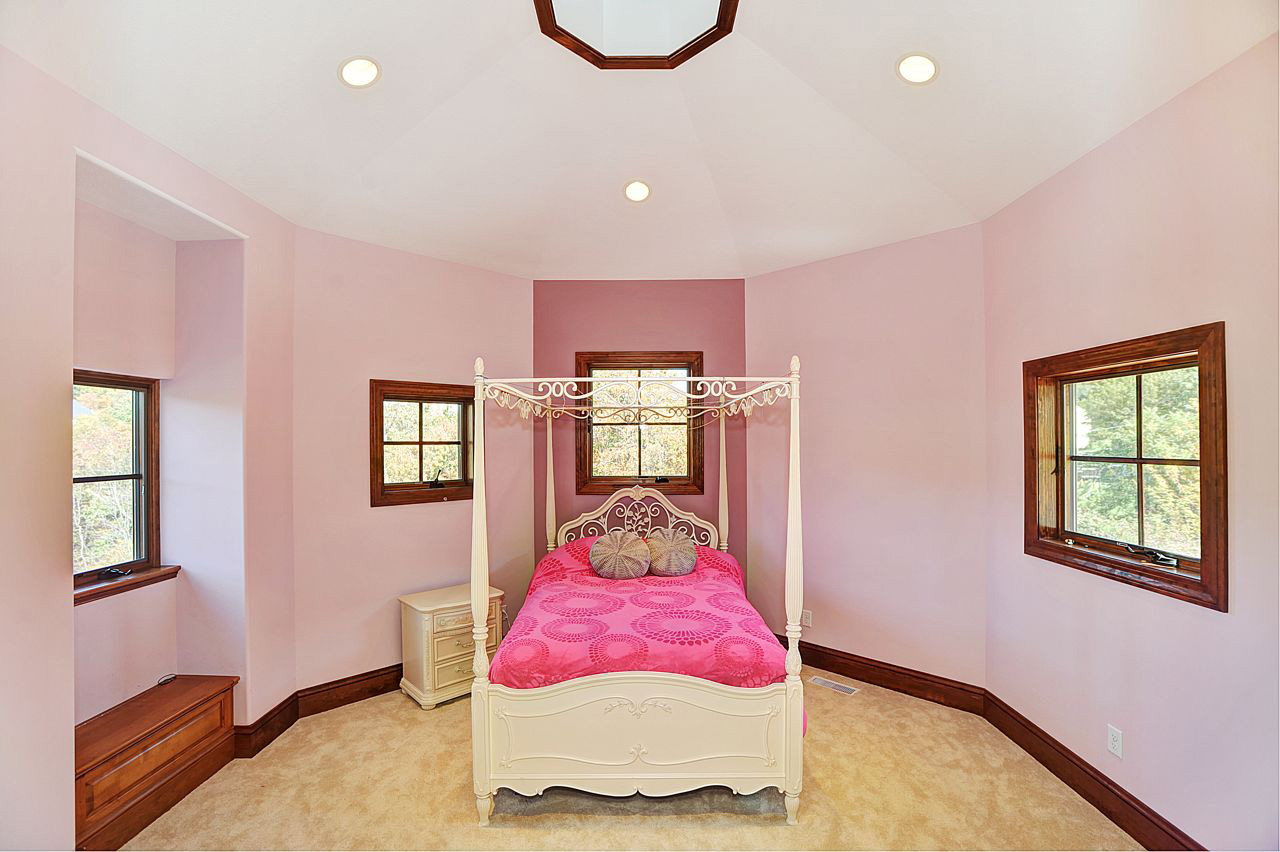 The kids’ bedrooms are located above the main level. Here, the owners asked Martin and Morgan to make the home larger, growing it from a four bedrooms to six (approximately 8,000 square feet total).

The top floor is the master suite, which, says Sulia, “is almost like its own little apartment.” In addition to the master bedroom, the suite includes a lounge with entertainment center and kitchen — including a full-sized refrigerator, microwave and sink — and an opulent, spacious master bath, with heated floors, a round Jacuzzi tub and shower. 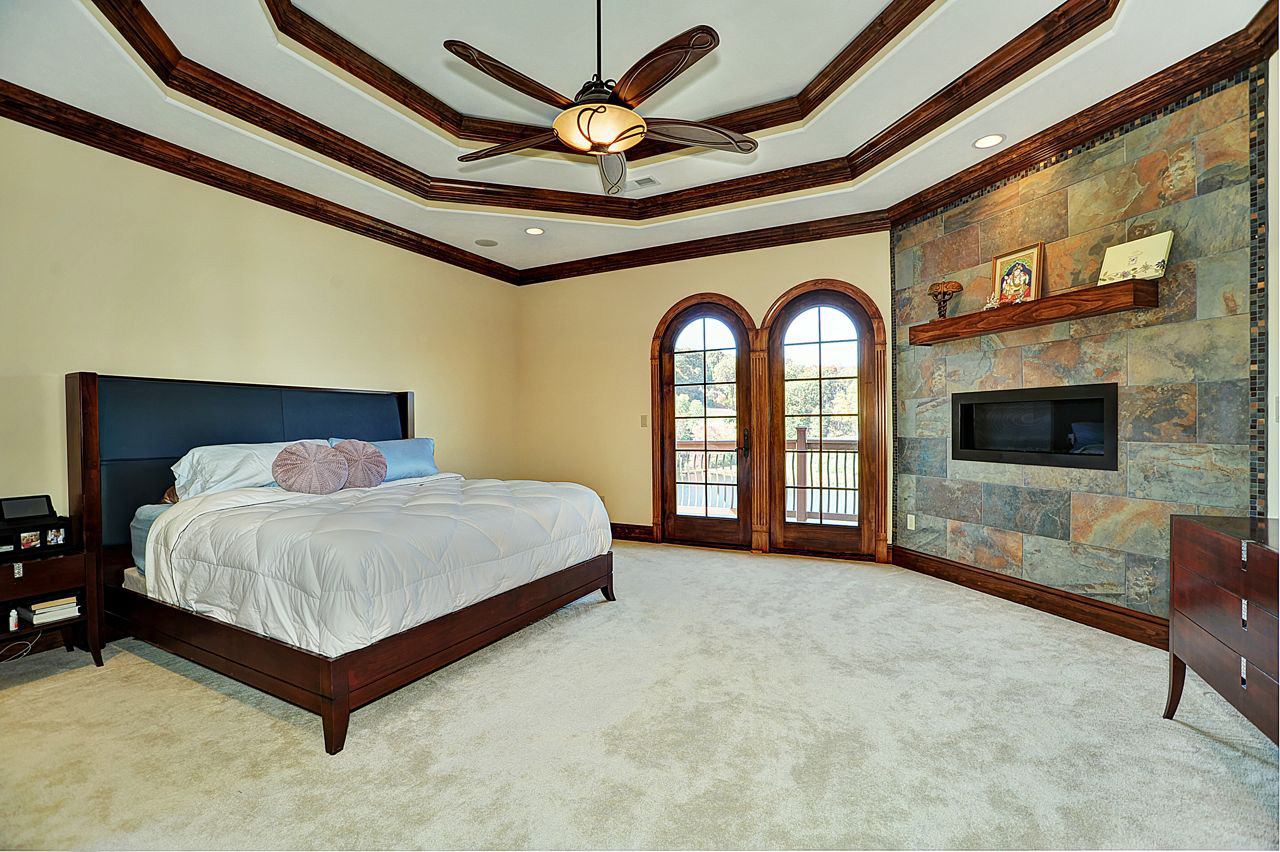 This floor also contains two outdoor living areas; one is an open-air balcony, and the other is a covered loggia, with tile floor, stone fireplace and a spectacular view of the lake — easily the husband’s favorite spot in the home.

“To be able to just stand there after a hard day’s work and look out over the water is very relaxing,” he says. “All you hear is the sound of the lake, the ducks and the geese. Being there just takes the tension of the day away.”

Maximizing views of the lake was a primary consideration for the home, according to Morgan, so he designed all the main family living spaces to face the rear. 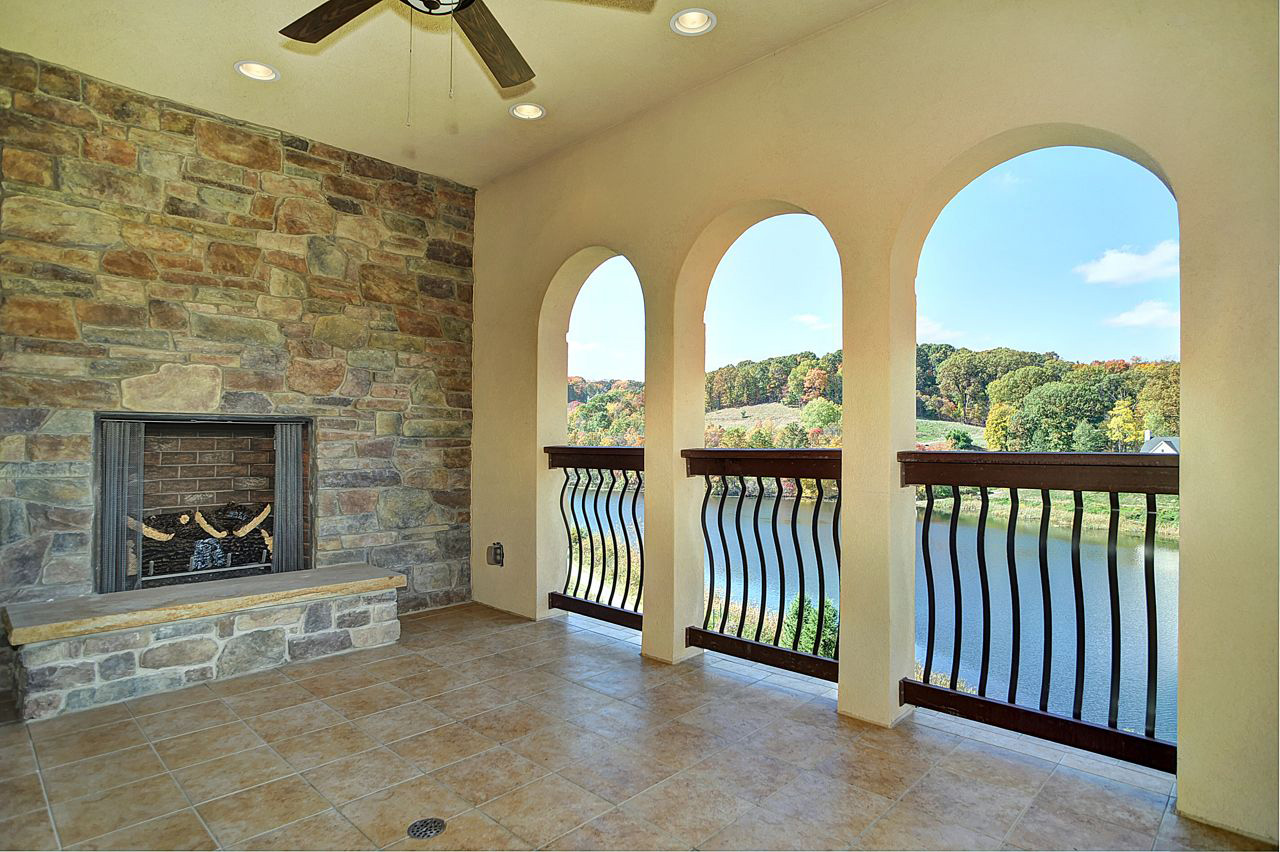 Stylistically, the lowest level — which has a home theater, play area and bar — is a significant departure from the rest of the home.

“This is where [the husband’s] style really shines through in the home,” says Sulia. “We used cooler colors. It really contrasts and jumps out at you when you walk down because you aren’t expecting to see that look.” 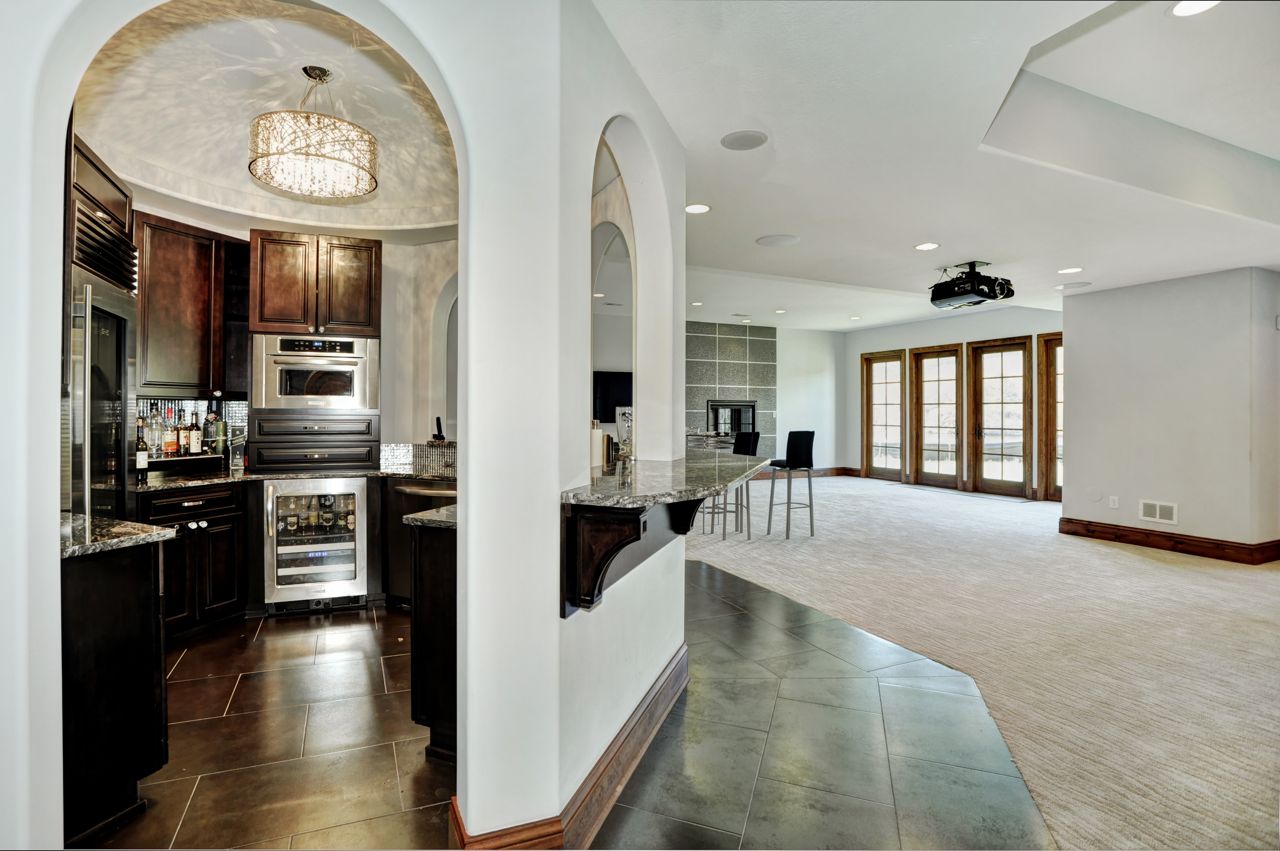 This oddest feature here is the bar placement.

“[It’s] an octagon shape and it was the couple’s idea,” says Martin. You won’t see another one like it.”

This article appears in the March 2013 issue of Pittsburgh Magazine.
Categories: Best of Design, From the Magazine