Your guide to finding the finest flapjacks in town. 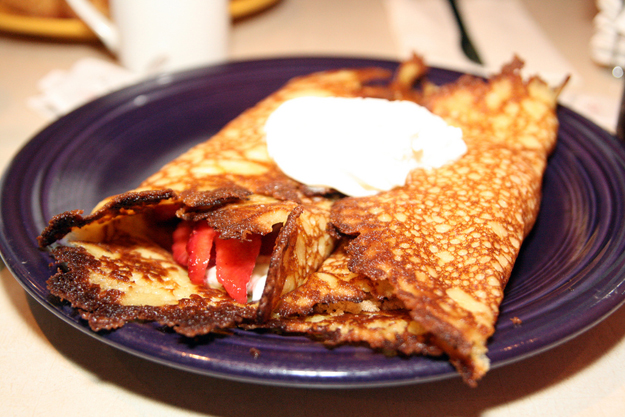 Hotcakes Abound During National Pancake Week
Some of us are morning people. Then there are those of us who rely on a giant cup of coffee to get moving. Either way, we all need to somehow refuel in the a.m. And what could be better than gobbling a pile of hotcakes? Since it's National Pancake Week, Eat Street would like to suggest a few favorite spots that dish out some of the finest cakes in town.

Dor-Stop Restaurant, known for its delicious hot cakes (have you tried the walnut apple cinnamon?!), has been one of Dormont's go-to breakfast spots for many years. Even Guy Fieri took notice.

Pamela's P & G Diner has been feeding hungry 'Burghers since 1980. Operating a handful of eateries, the diner serves up some of the best flapjacks in town, like the simple yet delicious strawberry jacks. It's OK, go ahead and indulge—President Obama couldn't resist 'em either.
(Several area locations. Info: pamelasdiner.com)

Joe's Rusty Nail sits in an unassuming storefront along one of Bellevue's main drags. Yet its homestyle hot cakes draw regulars week after week. Stop by the small eatery and order some (all day long)—you won't regret it.
(560 Lincoln Ave., Bellevue. Info: 412/766-9228)

Can't get enough flapjacks? In honor of National Pancake Day, you can order a free stack at any IHOP location on Tuesday. Eat up!

Local Chef, Restaurateurs Among Semifinalists in James Beard Foundation's 2012 List
Here in Pittsburgh, we know that we're lucky to have supremely talented chefs and culinary professionals who work hard to elevate the quality of cuisine. And we're especially glad when others take notice.

Recently, the James Beard Foundation, which annually recognizes top talent in the food and beverage industry, revealed its list of semifinalists for 2012. Among them were Kevin Sousa, Best Chef: Mid-Atlantic (Salt of the Earth); and Tom Baron and Bill Fuller, Outstanding Restaurateur (big Burrito Restaurant Group). Congrats, gentlemen!

Del's To Be Featured on Food Network
Within recent months, we've seen our share of film crews roll into town. We've even welcomed a TV team. The one from "Restaurant Impossible," to be exact.

Long a fixture in Bloomfield, Del's Bar & Ristorante DelPizzo on Liberty Avenue received a makeover in December from chef Robert Irvine and his crew, who came in to do a complete overhaul … in 48 hours. The group had a single mission when it stepped foot in Del's: Make much-needed improvements that were called to their attention, from appearance to staff and menu changes. Del's, owned and operated by the third-generation DelPizzo family, will make its small-screen appearance Wednesday night at 10:00 on Food Network.

This article appears in the February 2012 issue of Eat Street.
Categories: PGHeats