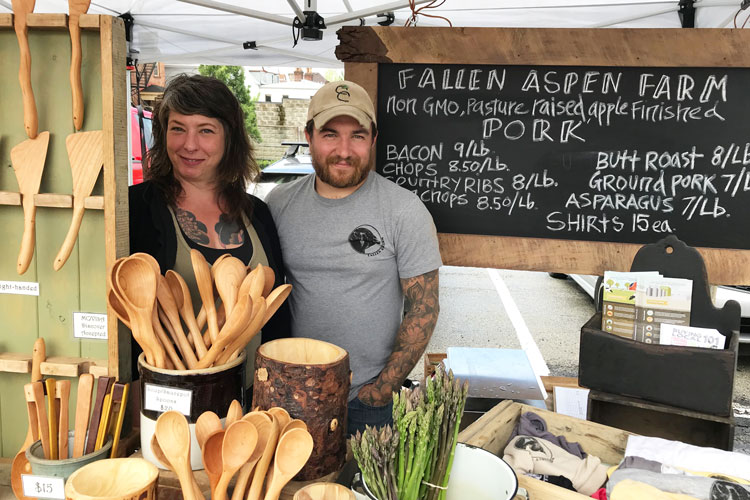 Jake Kristophel and Desiree Sirois were so charmed by Princess Pea that they couldn’t bring themselves to take her to market.

The 1-year-old sow, born on the farm, was meant to join the rest of her cohort of hogs for slaughter but the bond was so strong — the pig sometimes prefers cuddling over eating — that they decided to keep her as a free-roaming pal living a hog’s life on the fields of their Fallen Aspen Farm in Plain Grove Township in Lawrence County.

“I wish people knew how emotional, intuitive and smart pigs are. Confinement operations are hell for any animal but especially those with this kind of intelligence,” says Sirois, who ate a vegetarian or vegan diet for most of her life.

That’s taken into consideration at Fallen Aspen Farm, where Kristophel and Sirois aim to take a humane and intuitive approach to animal husbandry. Passels of pigs flock to them as they walk the property, oinking and grunting while they show affection by nipping at the farmers’ boots. “We try to spend a lot of time with them while they’re young,” Krispohpel says.

That’s not to say that Kristophel and Sirois aren’t serious ranchers. They started raising pigs a few years ago to have what they felt was an ethical and humane pork option for themselves, and after eating it believed they could rear tastier meat than is available in the Pittsburgh market — Fallen Aspen Farm pork is now on the menu at Bitter Ends Garden & Luncheonette, Cafe Raymond, Sienna Mercado and ShuBrew, and home cooks can place orders online or in person at the Bloomfield Saturday farmers market.

Kristophel grew up in Harmony and comes from a family of butchers. Sirois grew up in Rhode Island and moved to Pittsburgh from San Diego. The two worked as professional beer brewers and met several years ago while showcasing their work at the annual Urban Garden Party; Sirois still works part-time for ShuBrew, and Kristophel remains a co-owner of Full Pint Brewing Co.

The couple homesteaded in Harmony, raising chickens and ducks for eggs and meat, as well as growing a smattering of market vegetables, before relocating in 2014 to a plot with a long-term lease in Western Pennsylvania Conservancy’s 394-acre Plain Grove Fens Natural Area.

They planned on farming 10 acres but, as Kristophel says, “I have a problem going overboard on most things, so I said, ‘Let’s do 60.’”

The current sounder of swine is 60 pigs, and the goal is to scale up in the next few years to 200 or so. The duo raise a wide, diverse assortment of hogs such as Kunekune, Ossabaw Island, Idaho Pasture (a mix of Duroc,Berkshire and Kunekune), Mulefoot, Mangalitsa and Gloucestershire Old Spot, and they keep them longer than a conventional operation — at least a year as opposed to a typical four to six months. “We raise all the breeds that production pig farmers would say, ‘What are you doing?’ But the pigs taste amazing,” says Sirois.

Kristophel applies his extensive permaculture background, too, and soon the pigs will forage in the hazelnut and fruit trees that he and Sirois planted on the edges of the farmland. They go through tons of apples every day, which they believe are the perfect way to finish their pork. “The fat of apple-finished pork tastes like sweet butter,” says Sirois.

They also are slowly incorporating a menagerie of other animals, primarily Icelandic sheep, pastured chickens and a couple of heritage-breed cows for rotational grazing on the pastureland; the movement and manure of the various species will help maintain the health of the land with minimal outside input — but a lot of hard work — from Kristophel and Sirois.

There are plans for a butcher shop in Harmony, and, Krisophel says, they’d like to slaughter their own meat to allow their animals to finish life with the same compassion as they started it.