History, and Easy Living, Meet With This Townhouse on Washington’s Landing

Located just 2 miles from Downtown, the three-bedroom home looks over the Allegheny River and has its own theater room. 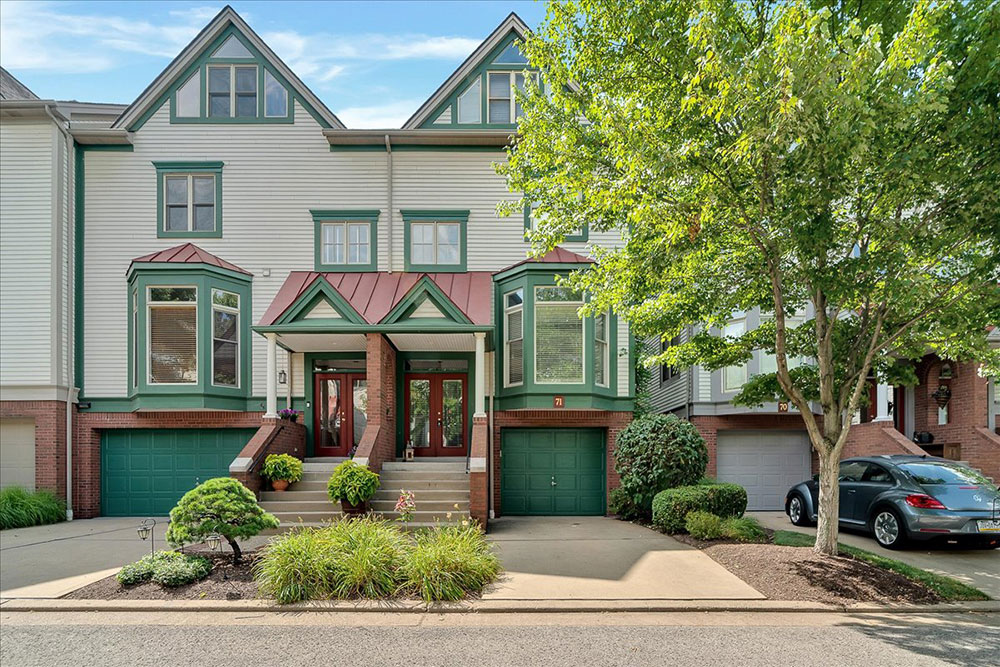 Situated along the Allegheny River at 31st Street and Route 28, Washington’s Landing is one of Pittsburgh’s most intriguing — and beautiful — neighborhoods.

Once a brownfield site known as Herr’s Island, the location got a makeover as a mixed-use redevelopment in 1987.  Along with the new name, the island — just 2 miles from Downtown —  got a new identity when a marina, restaurant and 88 housing units, ranging in price from $249,000 to $580,000, were built. It was a princely sum for the time — and a bold move for buyers who jumped into that market.

Since then, the island has become a destination for rowers, boaters and bikers, while companies (including Pittsburgh Magazine) call the island’s office park home. 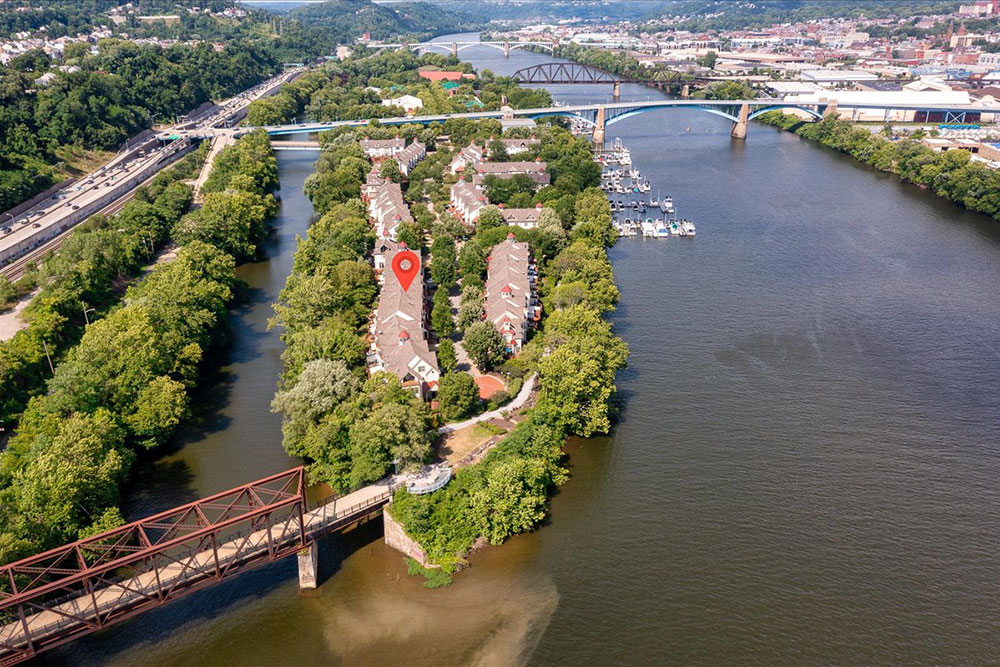 When Dr. Daniel Murariu and his wife, Casciana, moved to the area in 2019, they were thrilled to purchase 71 Waterfront Drive.

“I was in Houston finishing my training at MD Anderson and came here to work at Allegheny General Hospital,” Daniel says. “Moving [again] is bittersweet.” 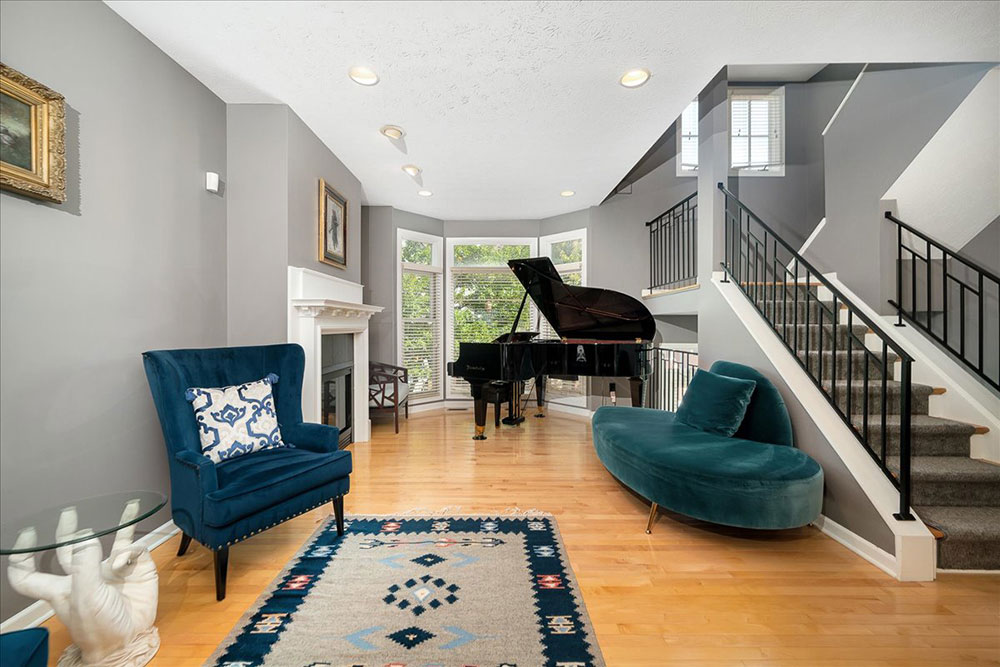 Featuring two bedrooms, 2½ bathrooms and an upper-level office that doubles as a third bedroom, the home has four finished levels of living. Other interesting features include a lower-level theater room with all the bells and whistles.

“Our master bedroom faces the water; it was just beautiful walking up to the view,” Daniel says. “Sometimes in the morning I would see the rowers going by and I would be having my coffee.” 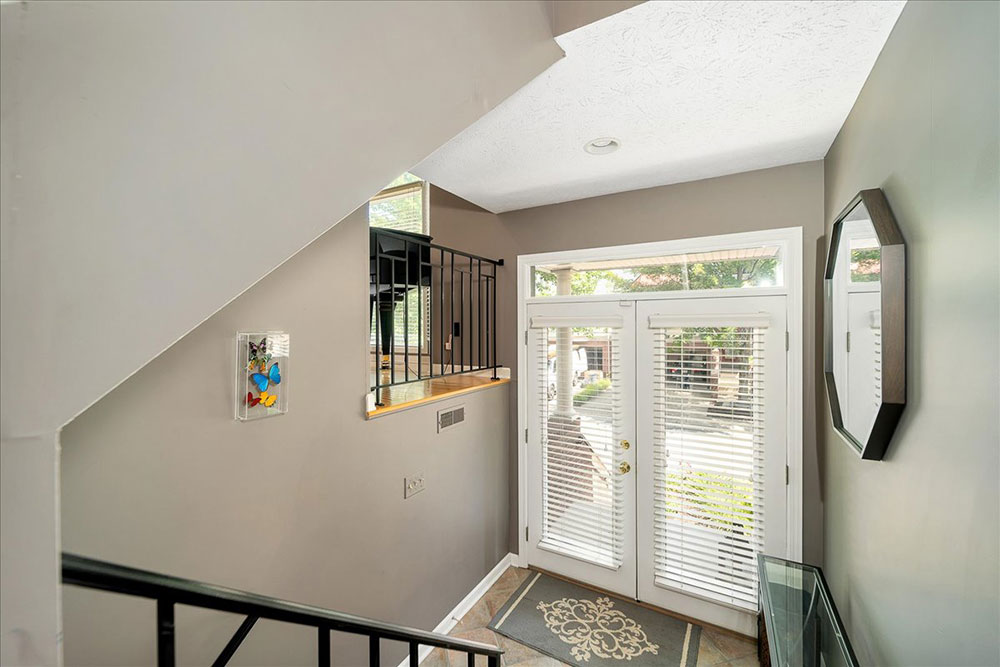 The home’s gracious entry has two glass doors that let in lots of light. A few steps up is the main living space, which features an open-concept kitchen and dining room. Solid oak hardwood floors are found throughout the home;  in the bow window sits a grand piano..

“I went to a music school when I was young,” Daniel says. “It was a great room to entertain in. We did have some [live] music when our friends were over.” 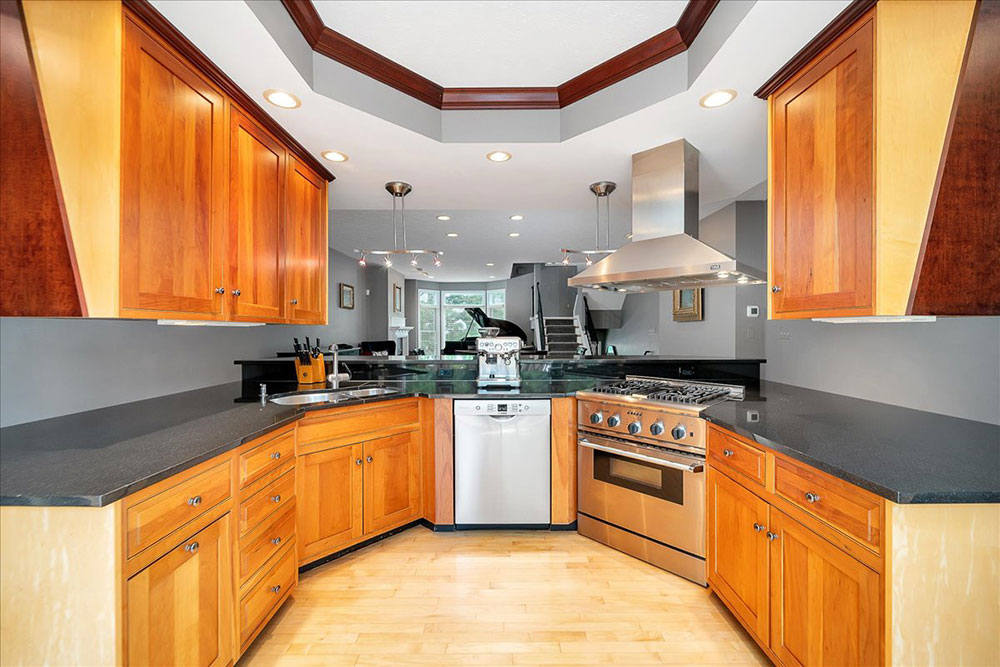 The kitchen features natural cherry cabinets that float from the ceiling. The cabinet ends are finished in two different stains and juxtaposed in angles to add a modern touch. A chimney exhaust hangs over the cooktop on the peninsula island, which offers plenty of counter seating.

Stainless-steel appliances and midnight granite countertops round out the kitchen design. A dining area on the kitchen’s peninsula side has plenty of room for a large table. 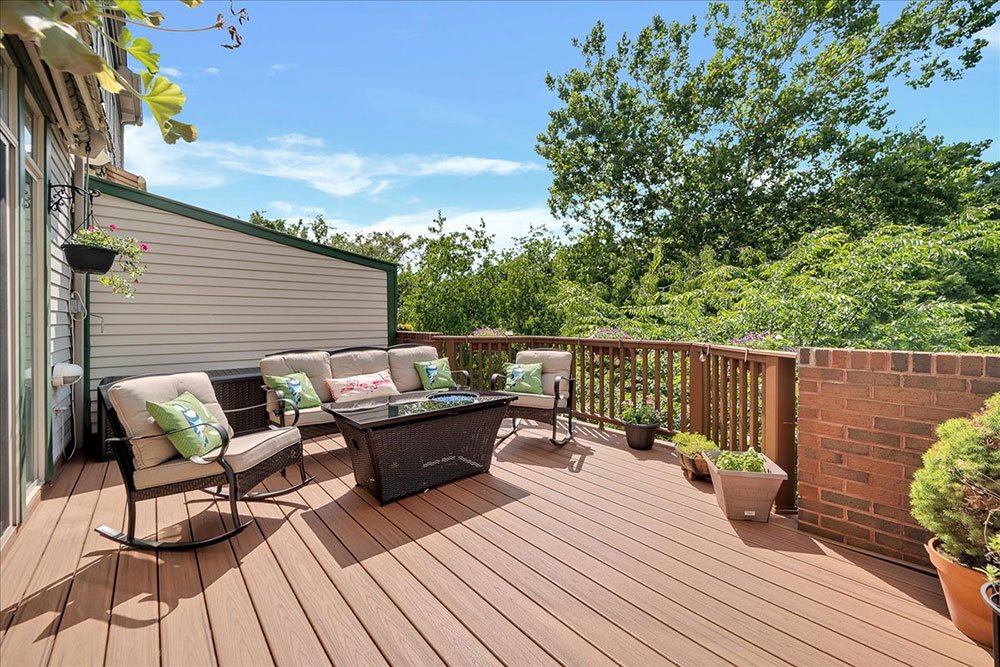 On the other side of the kitchen, a wall of windows and a glass door provide access to the upper deck, which features a plethora of outdoor seating. The couple also installed an outdoor fire table perfect for entertaining on fall nights. 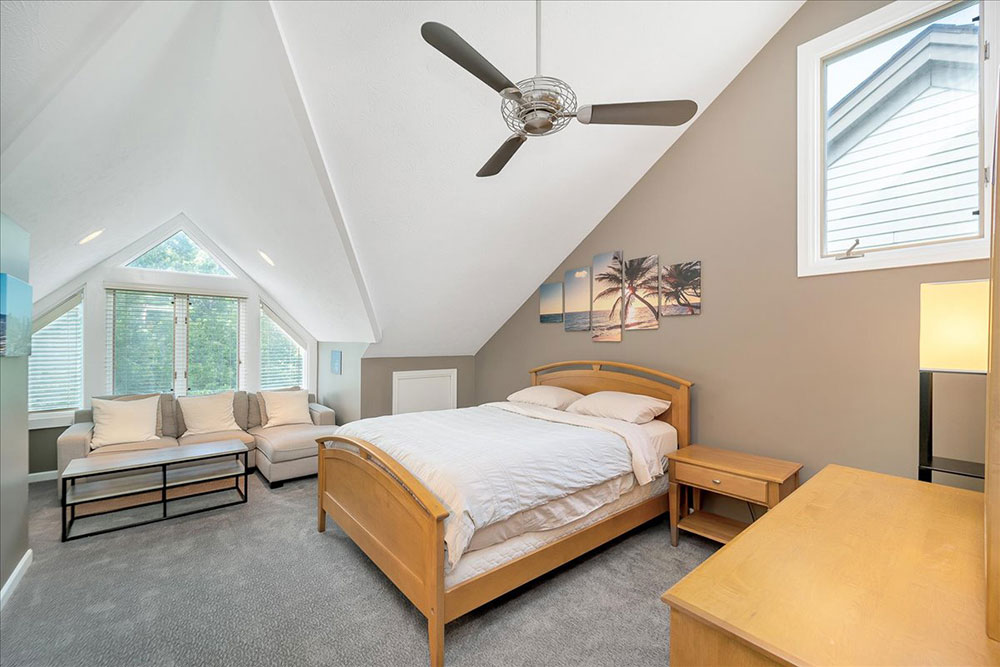 Upstairs, two bedrooms include the primary suite, which feature views of the river. The amenity-filled ensuite bathroom includes  a wet area with a large Jacuzzi bath, double vanity sink and a large shower wall with double bath fixtures.

Serviced by a second full bathroom, the second bedroom has a dormer ceiling and more views of the river. The spacious third office/bedroom has dramatic dormers and oak flooring.

“It was great to use for visiting family, and as my study area when I was studying for my MBA,” Daniel says. “I like to play chess so we used that room for that activity.” 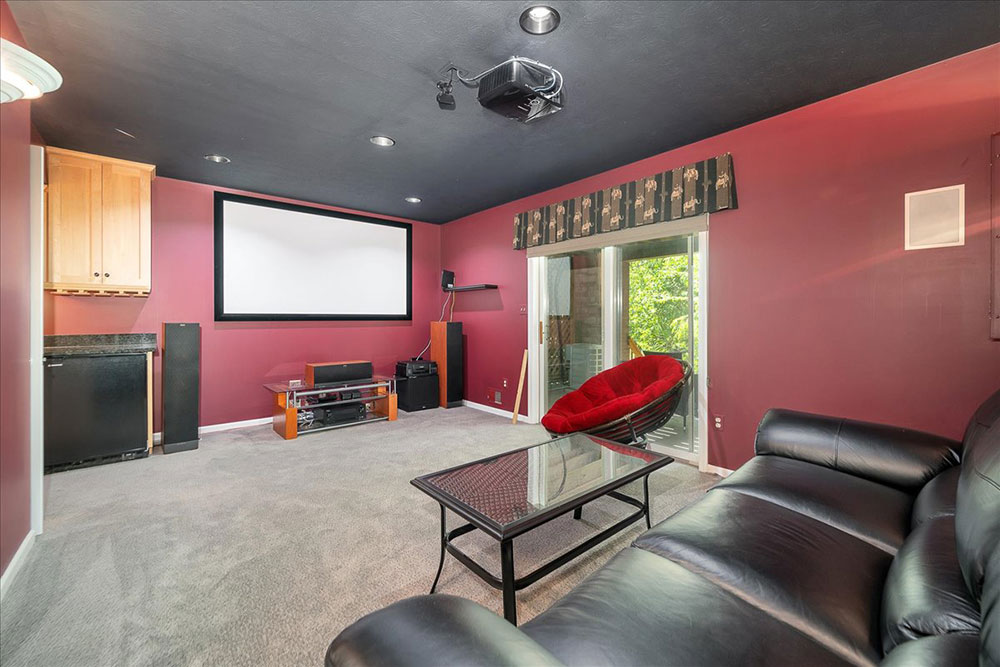 The lower-level theater room has a 3-D projector system, a large white screen, surround sound and darker paint colors, including a black ceiling to enhance the theater experience.

“It was one of our favorites,” Daniel says. “We didn’t have to go for the latest movies, we had them in our home.”

A sliding glass door leads to a lower-level outdoor space where nature comes right up to the doorstep. A half-bathroom rounds out the layout. 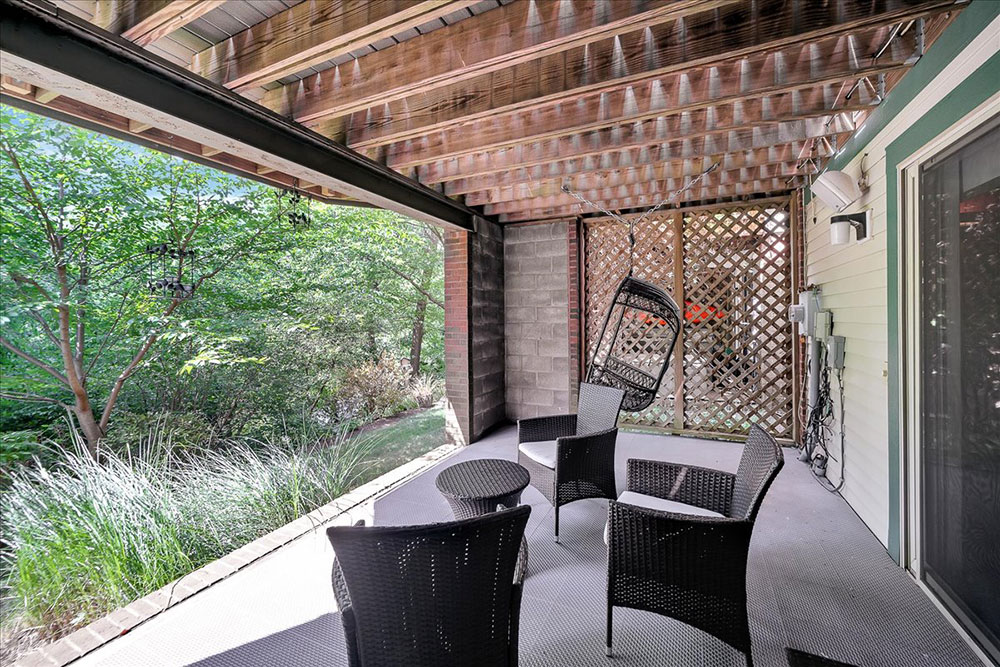 The couple, who have an infant, say they love the lifestyle the island offers, including a diverse mix of residents that range from retirees to young professionals.

“We would take evening walks around the island and we spent a lot of time at Redfin Blues on the marina,” Daniel says. “Our neighbor has a dock and we would sit on the water and visit.”

He adds the area’s history is also a draw.

“When you walk to the other side of the island, you can see where George Washington almost drowned,” he says.

“My wife wishes she could take this house with us.”

About: Washington’s Landing is actually considered part of Troy Hill. The island has access via car from River Avenue. A bike and pedestrian trail runs the length of the island and connects to the Three Rivers Heritage Trail along the North Shore.
Population: The island has 88 housing units.
Planes, Trains & Automobiles: A 30-minute commute to the airport.
Schools: City of Pittsburgh
Neighborhoods: Once a brownfield, the island previously had an animal processing plant. The story goes that farmers on top of Troy Hill would run the animals down Rialto Street for processing. Boaters and walkers intersect daily along the land, which underwent a complete and comprehensive clean-up that took years — and transformed the island into the nature reserve it is today. Visitors these days will find blossoming plants and trees along the trails, along with plenty of wildlife.