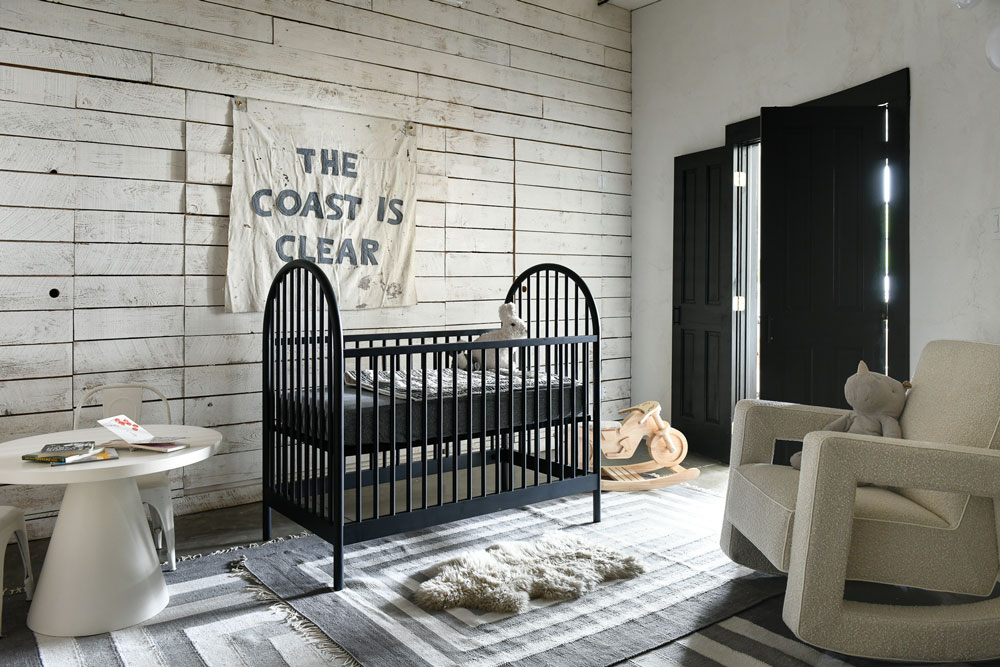 For Steve Ford, co-star of HGTV’s “Restored by the Fords” and “Home Again with the Fords,” and his wife, Andrea Cargill, first came love, then came marriage 一 then came a baby in a nursery with a giant disco ball.

The couple, who live in a converted warehouse in Pittsburgh, welcomed their first child, Jack Michael Ford, in June. Steve says he and Cargill are thrilled to be new parents, even though that means they’re not getting a lot of rest.

“Being Jack’s parents is awesome. He’s the best, and we can’t imagine life without him,” he says. “We’re not getting a lot of sleep at this point, but coffee helps!”

But with help from designer Leanne Ford, Steve’s sister and HGTV costar, the baby had a cozy — and stylish — place to call his own right away. 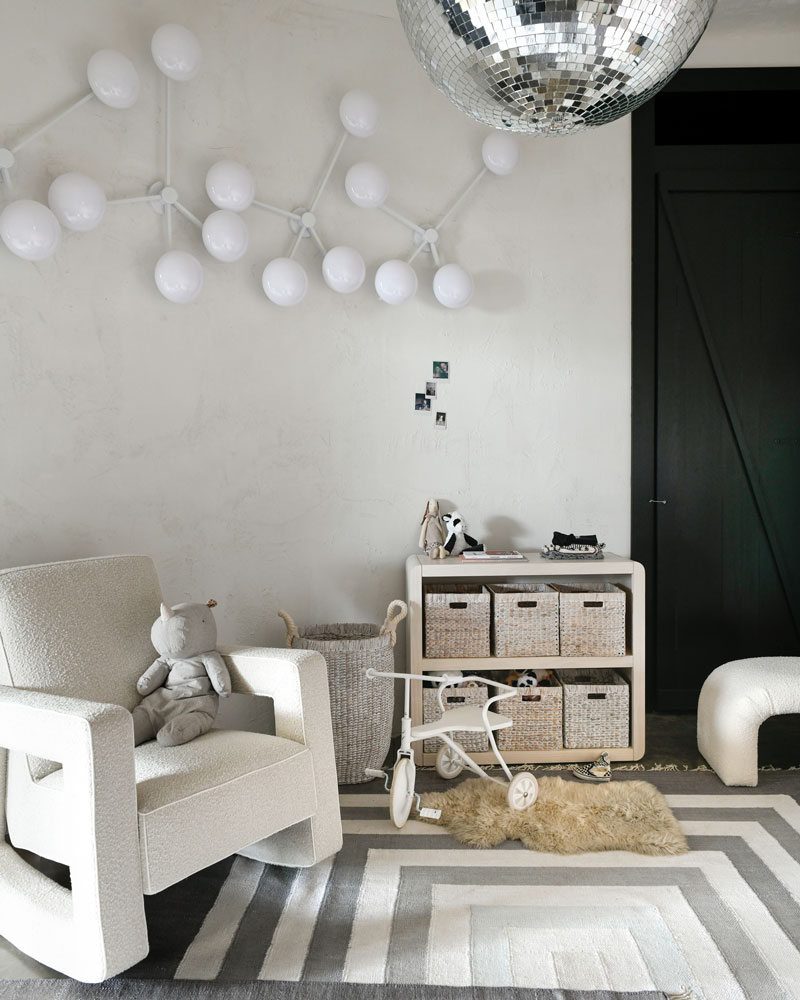 The siblings, who also collaborated on the transformation of the former warehouse into an industrial-chic loft, worked together to convert the space from a dining room and dance floor area into a nursery. Steve says it was a fresh way to work with his sister on a very personal project.

“Leanne did an amazing job bringing the cool industrial vibe to life in Jack’s room,” he says. “I contributed to the room layout and build-out, and the oversized disco ball was my idea. What we really appreciate is that the nursery looks like a natural extension of our home and that was important to us.”

The high-ceilinged space has a black-and-white color scheme, a white rustic wood accent wall, curved wall and double doors. But the industrial-inspired space shouldn’t fool guests, according to Cargill. She says Leanne added pieces from her Crate & Kids furniture and decor line to soften up the room and make it personal.

“The space has 12-foot ceilings, but the cool furniture, playful art and texture of the walls, floor and lighting all make it one warm and cozy space that the entire family enjoys,” she says. 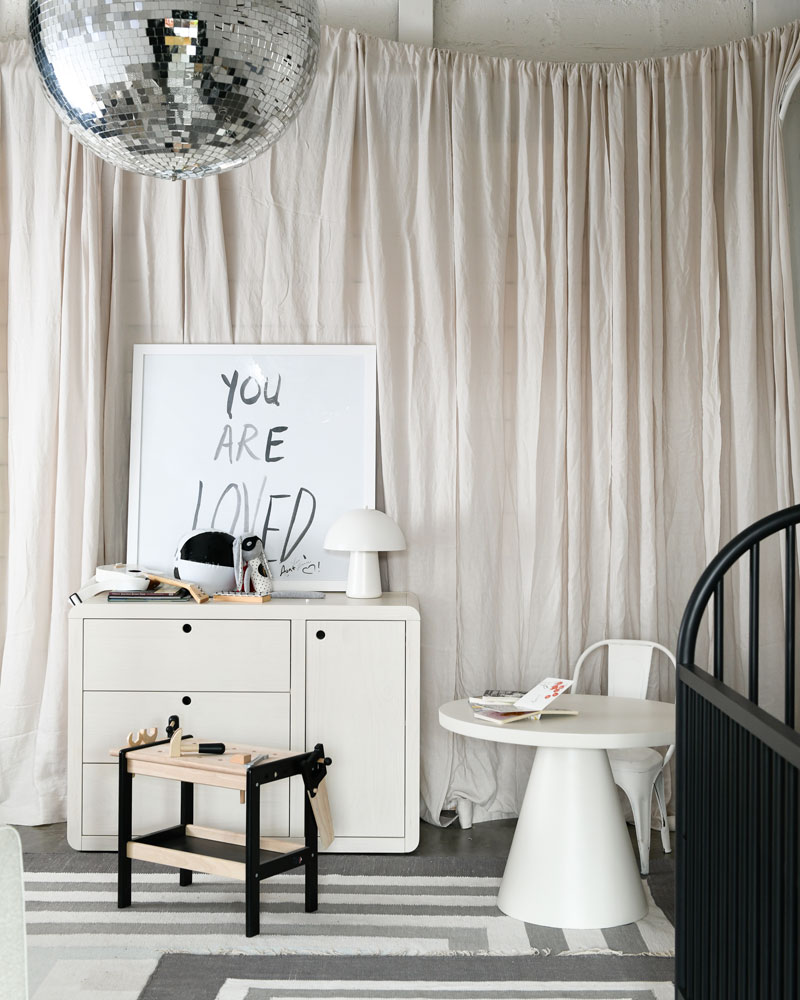 “Andrea and Steve’s nursery is a great example of how a children’s space can easily and seamlessly fit in with the design of your entire home,” she says.

One of Leanne’s special details for her nephew is a framed piece of artwork on the dresser that reads “You are loved,” and signed “Love, Leanne.” Other fun pieces in the nursery, also from Leanne’s Crate & Kids line, are a wooden rocking motorcycle, rocking chair, changing table and a mushroom light. There’s also a beachy tapestry above the changing table that reads “The Coast Is Clear.” 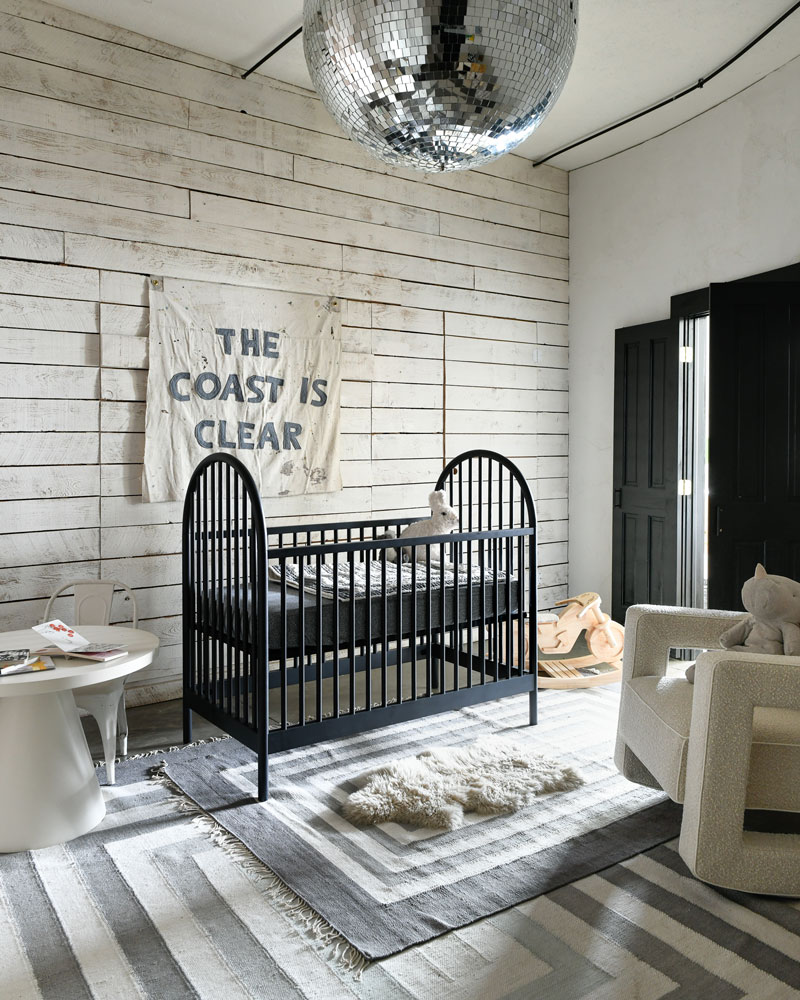 As for that oversized disco ball, Steve says it’s his signature design piece and one he definitely wanted to incorporate into Jack’s room.

“Over the years we’ve used disco balls over dining tables, in living rooms, and I thought it was time to see one in a nursery,” he explains. “That’s my trademark design move.”

Aside from having a one-of-a-kind nursery, Cargill says she and Steve are ecstatic to begin their journey as parents.

“It’s a dream come true to become Jack’s parents and our hearts are full,” Cargill says. “It’s a happy time for the Ford family!”