The "sweet" legislation is making its way through Harrisburg. 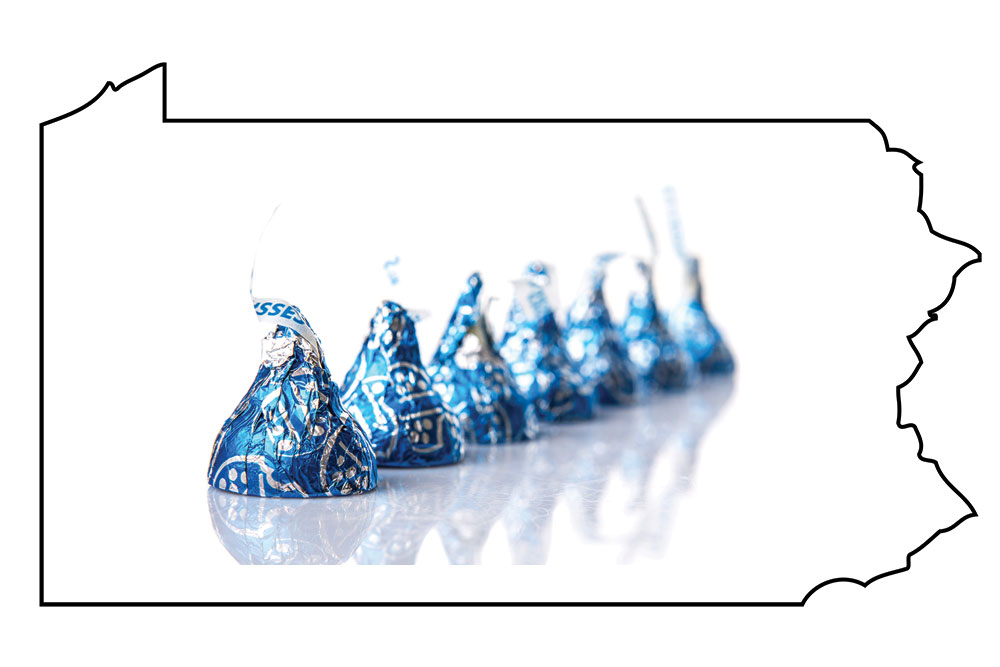 A group of Bucks County high school students wants to make Hershey’s Kisses the official candy of Pennsylvania — and they just got one step closer.

The State Government committee of the state Senate approved a bill to make Hershey’s Kisses the first official candy of the commonwealth on Wednesday. The bill passed with a vote of 10-1 — Sen. Dan Laughlin, R-Erie gave the bill “a respectful no vote” because he has three chocolatiers in his district.

The “Hershey Kiss Committee,” as the eight students call themselves, formed in January 2021 at Newtown Middle School under the guidance of teachers Richard Loughran and Matt McCarthy. The students have met with Hershey Company executives, written bill language and lobbied legislators as part of their efforts.

The committee quickly felt the state candy should be a Hershey product, Loughran wrote in an email. From there, they narrowed it down to the Hershey’s Kiss.

“The Kiss symbolizes Pennsylvania in so many ways and no one can question its impact on our history, culture, economy and philanthropy,” Loughran wrote. “They can even be found in the Senate candy bowl at the Capitol building. Additionally, the Kiss is unique as opposed to a candy bar.”

“To be able to sit in the actual State Senate and Senate Committee room was something that I would have never imagined when we first met as eighth graders over a Google Meet,” Elaine wrote in an online message.

The Hershey Company started producing Hershey’s Kisses in 1907, pausing production in the 1940s because of aluminum rationing during World War II. Nowadays, more than 70 million Hershey’s Kisses are produced every day.

The chocolate economy (especially Hershey’s) touches every county in Pennsylvania, according to Sen. Sharif Street, D-Philadelphia — from longshoremen unloading cocoa in Philadelphia ports, to factory workers producing the sweet treats in central Pennsylvania, to truck drivers transporting chocolate across the state.

“It is truly a Pennsylvania thing,” Street says.

The bill now heads to the House and Senate floors for votes and then must win a stamp of approval from the governor before it becomes law.

While this bill would make only Hershey’s Kisses the official candy of Pennsylvania, the Pittsburgh Post-Gazette reports that lawmakers are already suggesting state candy runners up. Sen. Kristen Phillips-Hill, R-York, proposes the York Peppermint Pattie, while Sen. Scott Martin, R-Lancaster, says he wants Wilbur Chocolates, which is based in his county, as a runner up.

To Loughran, these candies just aren’t as symbolic of Pennsylvania as Hershey’s chocolate.

“Although some of the legislators have and will support a particular candy that is created within their district or by their specific constituency, we are trying to pass a state symbol not a local symbol,” Loughran wrote in an email. “There isn’t one as symbolic or representative for Pennsylvania as is a Hershey’s candy.”

Loughran says he “couldn’t be more proud” of his students’ efforts and commitment to seeing the project through.

“I am excited about the opportunities that lay ahead for them to further their understanding of the [legislative] process and see the impact they can have,” Loughran wrote in an email.

Collet, the Bucks County senator, says she hopes this bill is just the first of many that the Council Rock students choose to advocate for.

“It’s heartwarming and inspiring to see young Pennsylvanians actively participating in our legislative process, especially at a time when we need civics education more than ever,” Collet says. “I truly hope this experience and today’s vote encourages the students to stay involved, because their voices are vital in the decision-making process.”