Heritage Craft Butchers Is a Gem That's Worth Driving To

The trio behind the Marianna butcher shop hope their rural storefront will become a destination. 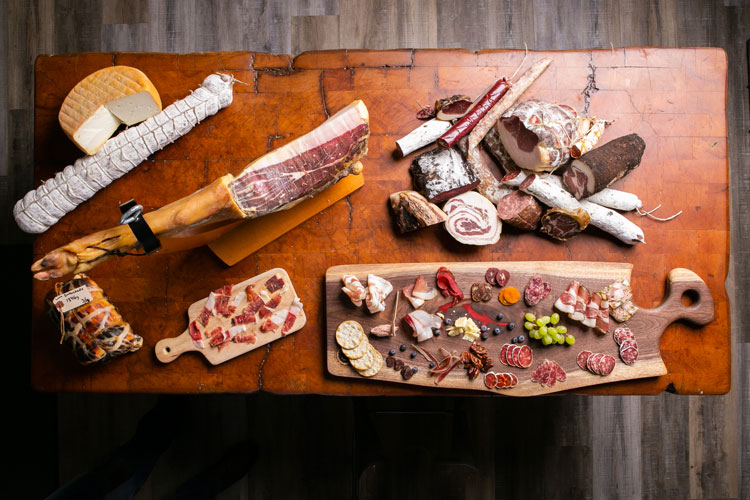 Wes Cannon, Bob Von Scio and Jared White are banking that meat lovers from as far afield as Pittsburgh and Morgantown will weave their cars down old country roads to visit their butcher shop, which opened in January. Once they arrive in the rural community of Marianna, a sleepy hamlet in Washington County where an at-the-time technological marvel of a coal mine once operated, the owners of Heritage Craft Butchers are counting on them to fill their coolers with hunks of pigs, cows, lambs, rabbits, goats and other beasts, plus a variety of house-made charcuterie, and maybe hang out for a bit before heading home.

“We settled on Heritage as a name because we’re working with heritage breed animals, are using heritage recipes based on Old World techniques and practicing a classic form of butchery,” says Cannon.

Cannon and Von Scio roomed together for a semester of college in 2005 and a decade later reconnected after Cannon attended a lecture on permaculture that Von Scio was giving at Washington & Jefferson College. Their rekindled friendship revolved around preparing hogs raised on Von Scio’s homestead. A year later, they met White through a mutual friend. “It became a thing with the three of us — hanging out, butchering animals and making a lot of charcuterie,” Cannon says. 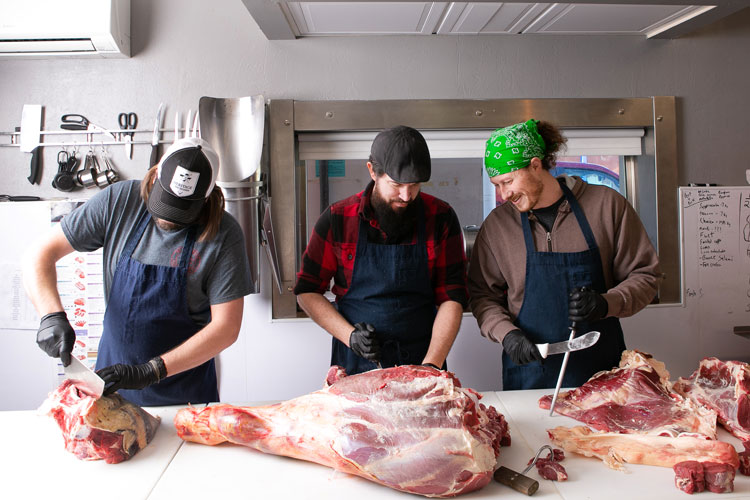 They used Von Scio’s pigs and, as they deepened their passion for the craft, started purchasing hogs from small farmers, even going as far as to drive deep into the foothills of the Shenandoah Mountains in Virginia to bring back a prized, 100-percent mast-fed Ossabaw Island hog, a heritage breed beloved for its delicious fat. The collective obsession drove them to convert a barn on Von Scio’s property into an abattoir, and they built a curing chamber in the hayloft. “We got to the point where we had more than 2,000 pounds of charcuterie between the three of us,” says Cannon.

Passion prompted a business plan. White was a stay-at-home father, Cannon (who once was a professional chef and says he’s had “a lot of jobs”) was most recently a professional sailor and Von Scio had his homestead after retiring from a consulting job. “We’re all people who are passionate and working hard. But we also had non-traditional jobs that allowed us to put a lot of time into building this,” says Von Scio.

They looked at locations in Washington, Pa., and decided the real estate there was over-valued. When a realtor showed them a vacant former bank building in Marianna, they knew they hit the money. “Even if it didn’t work out, we figured we’d have a really cool clubhouse,” says Cannon. 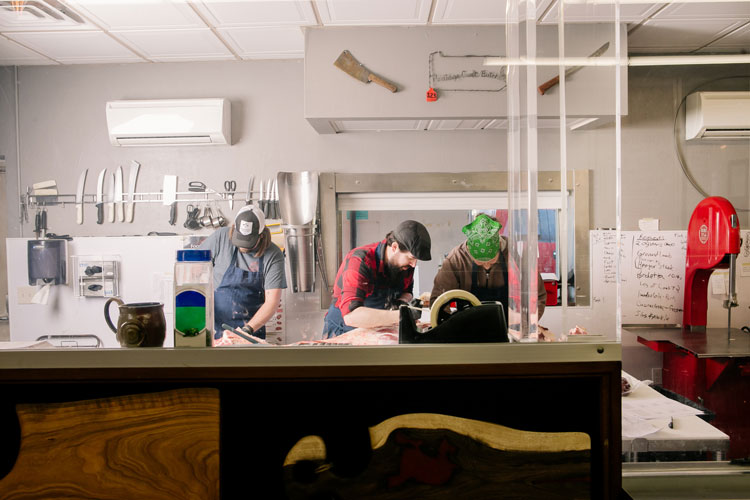 It took them about a year to refurbish the space. They built a butchering station behind the old teller counter; its thick, bullet-proof plexiglass wall provides a legally necessary separated area from the food that’s for sale — it also sets the stage for customers to witness butchery in action. An adjoining bank vault currently is used for storage but eventually will be converted into an aging room for long-term projects such as prosciutto.

There already are meats of all kinds hanging in a curing room at the front of the shop: culatello, young prosciutto, lomo, guanciale, pancetta arrotolata, duck spek, fuet and sopressata are among the flotilla of charcuterie slowly fermenting into their final, delicious forms.

The trio practice a style of meat cutting known as seam butchery, following the natural breaks between muscle and bones as they take apart the animal. White serves as the primary butcher, but all three are skilled at the craft. 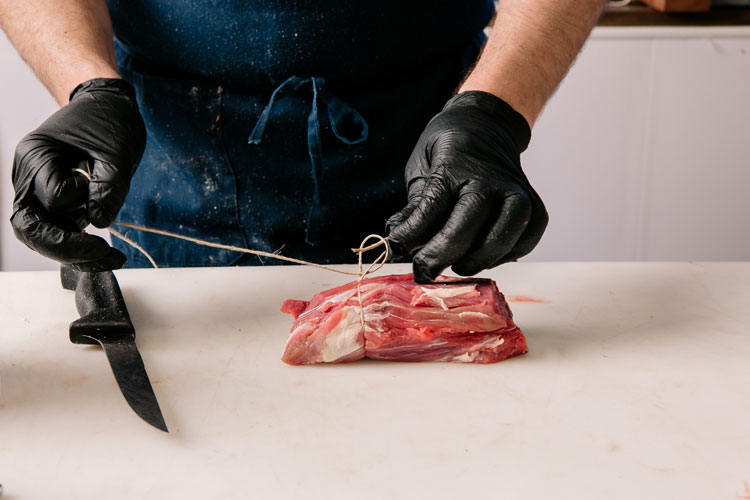 Von Scio taught himself to butcher meat while homesteading, and he and Cannon continued to develop their abilities together; Cannon also took butchery classes at the now-closed Crested Duck Charcuterie. White learned how to butcher as a hunter and later took a job at a small slaughterhouse. “We don’t claim to be master butchers. We’re passionate about our craft and are proud of what we’re doing. And we’re always getting better,” says White.

Seventy-five to 80 percent of the animals they butcher come from within 20 miles of the shop. “There is a lot of quality livestock grown here. Even farmers who are raising commodity beef often have a small herd of heritage breeds,” says Von Scio.

The original plan was to use the space as a production facility and sell primarily at farmers markets and other events. Instead, the butcher case is stocked with fresh and cured meats, as well as pâtés such as pork rillettes and head cheese. It’s a focal point of the space. “The foot traffic has really exceeded our expectations. We have people coming from Pittsburgh, Morgantown, Washington, Waynesburg,” Von Scio says.

“We wanted to open this butcher shop so that people could get cuts of meat they probably aren’t able to get anywhere else,” says White. 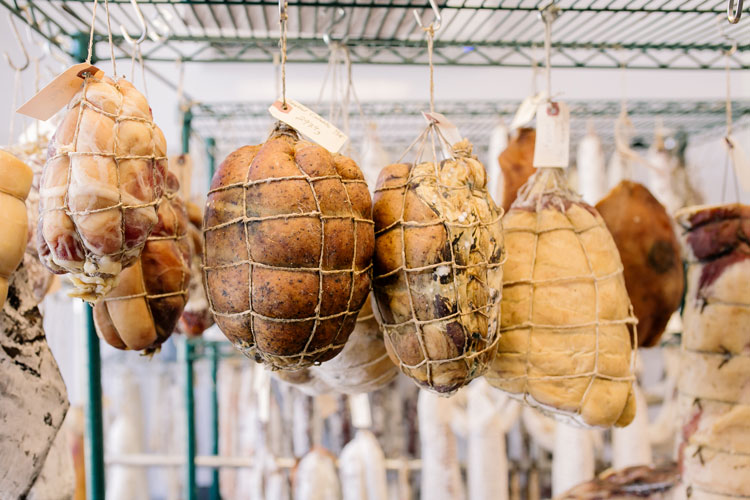 That means that the butcher counter, which is open Thursday through Sunday, isn’t limited to the typical chops and ground meat (you can get those, too), instead offering larger-format muscle cuts, bone-in primals and, if ordered in advance, large or uncommon cuts. In addition to stocking heritage breeds of cattle and hog, they also sell harder-to-find animals such as lamb, goat and rabbit. “People are going for it. And sometimes they say they didn’t like something, but more often they discover something they like. And now they want it every time they come in,” says Cannon, mentioning a regular named Lisa, who comes in every week for the pressa, a cut of pork shoulder that is butchered out rather than amalgamated as part of a “square,” multi-muscle cut, which is the typical way a pork shoulder is sold.

All three former vegetarians have their specialties. Van Scio loves to teach and to lead the shop’s butchery demonstrations; Cannon has a culinary background and loves service, he takes pride in setting — almost art directing — the charcuterie boards and other things for people to eat when they come for an event; White is one of just a handful of “approved” mushroom foragers in the state, and he plans to offer foraging clinics and also incorporate some of the foraged ingredients into recipes.

The butchering demonstrations, in particular, have proven to be a hit. They thought they’d do it once a month, but the demonstrations are so popular they happen weekly, and there also are openings for private bookings. Those can turn into a bit of a fun party, too, with elaborate charcuterie boards and an encouraged BYOB policy (separated from the sharp knives, of course). “It’s an alternative to dinner and a movie. Without going into the city, there are limited things to do around here,” Von Scio says.

This article appears in the May 2019 issue of Pittsburgh Magazine.
Categories: Eat + Drink Features