He may be green with yellow lips and a slanted head, but somehow he’s captured the heart of the lovely Ashley Ryon, 26, since she was in middle school in her hometown of Hanover, Pa., in the early 1990s.

Gumby was the star of “The Gumby Show,” produced using stop-motion clay animation (later known as “claymation”) that aired from 1956 and on-and-off throughout the years since. “I just always thought he was so cute and youthful and innocent,” Ashley says, “and my inner nerd came out when I read that Gumby was one of the first to use claymation.”

Some of Ashley’s Gumby collectibles live with her parents, Diana and Jim, in Cranberry.

“I had a history of moving every two years—Baltimore, New York, Vegas—so Gumby usually lived with my parents,” says Ryon, who now lives in the South Side.

“They’re music teachers, so sometimes they’d send me photos of my 4-foot-high stuffed Gumby standing next to the piano or with a trombone.”

But is poor Gumby lonely without his oddly orange equine sidekick? “I’ve been on a lifelong search to find the matching-size Pokey,” Ryon says. The stuffed Gumby is one of her favorites, but it doesn’t equal the 6-foot-high rare inflatable Gumby her father bought for her.

Ryon has cool stories to go with the collection. “Back in the late ’90s when I was in my mid-teens, I developed a Gumby website, and lots of people from all over the country would see it and just send me their Gumby stuff,” Ryon says. “They’d say, ‘We really don’t want this anymore, and you seem to like Gumby a lot more than we do.’” 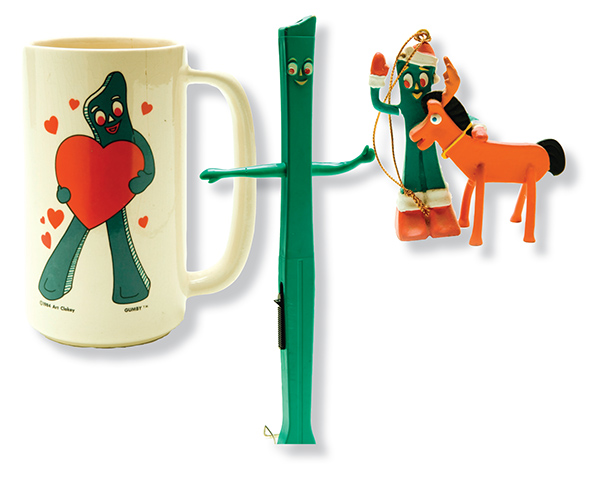 Ryon, who is the marketing director for a group of South Side restaurants and bars, including Double Wide Grill and Lava Lounge, maintains her geek cred today, creating and producing YinzerParty.com, a photo site of hip, underground party life in Pittsburgh.

Then there’s the time Hollywood came calling. “My sister Hilary and I were hooked on cheesy Lifetime [television network] movies. Someone from a production company saw my inflatable Gumby on the site and said he wanted to buy it.” Instead, Ryon rented him the less-valuable stuffed Gumby, shipping him off (temporarily) to stardom in the 2003 Lifetime movie Killer Instinct: From the Files of Agent Candice DeLong.

Finally, there was the brief, accidental and memorable conversation online via instant messenger with Art Clokey, Gumby’s creator. “At first I wasn’t sure it was really him, but then as we started talking I found out it was. That was a big moment,” Ryon says. Clokey died in January at age 88.

In addition to poseable figures and a multitude of other Gumby toys and toy sets, Ryon has Gumby slippers, clothing, jewelry, clocks and watches, radios, even rugs and toothbrushes.

She has some Pokey collectibles and even fewer featuring Gumby’s nemeses, the Blockheads, and the yellow dinosaur, Prickle, which, Ashley says, are actually her favorite characters.

Though Gumby’s career began in the 1950s, he had revivals on TV in the ’80s and ’90s, but he can be difficult to find today, except online.

Fortunately, Ashley’s brother Steve bought her the DVD boxed set of every episode. That’s 233 episodes of Gumby-mania—seemingly plenty for the even the most ardent fan.