Growing Up in Brookline: Suzie McConnell-Serio

The Hall of Famer went from the boys’ team at a tiny Catholic grade school to the Olympic podium. 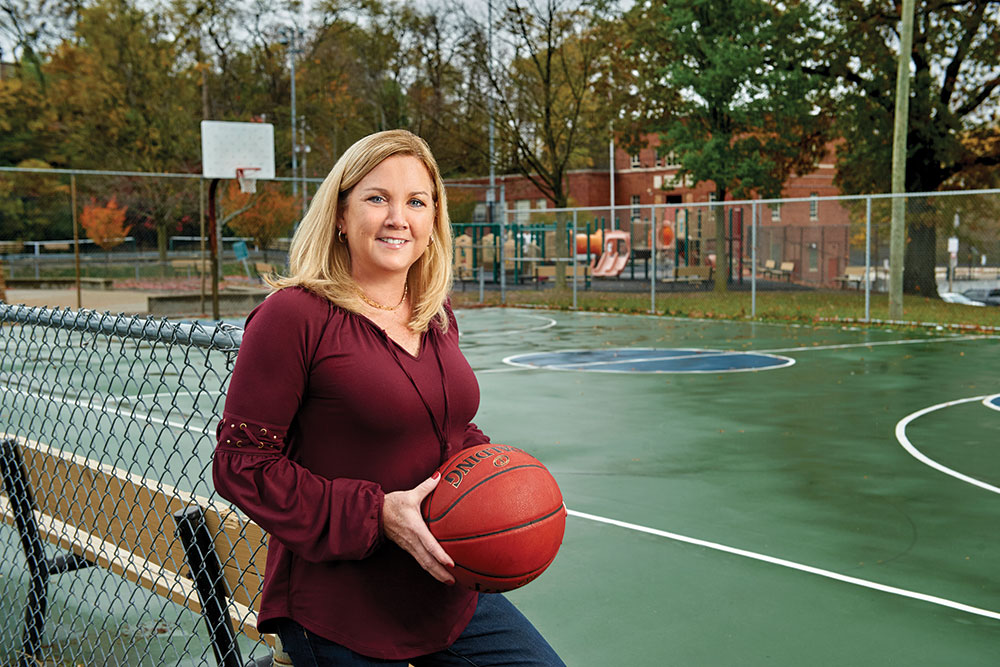 Suzie McConnell-Serio has played basketball all over the world, from nearby Gund Arena as a member of the WNBA’s Cleveland Rockers to Seoul, South Korea, as a gold medalist in the 1988 Olympic Games.

She started, however, in the 1970s, shooting at the court at Moore Park in Brookline.

“We were just outside as much as we could be, playing sports,” McConnell-Serio recalls of her childhood in the quiet city neighborhood. Those athletic pursuits were by no means limited to basketball. “It could be playing Wiffle ball in the street, NERF football … We used to play a huge game of release with all of the neighborhood kids.

“We would play outside until dinnertime, eat quickly, and then we’d be out playing until it was dark.”

McConnell-Serio attended elementary school at Our Lady of Loreto, a longstanding Catholic church in Brookline that celebrated its final Mass in August of this year. As her passion for basketball took hold, she had to improvise. “We didn’t have a girls’ team,” she says, so she started showing up to the boys’ practice. “I would shoot on the side and do some of the drills with them.” Her talent shone through; for two years, she played as a member of the boys’ roster before the school established a girls’ team, taking the court at the Brookline Community Center (tiny Our Lady of Loreto didn’t have its own gym).

McConnell-Serio has fond memories of the school, despite its diminutive stature. “I had 32 in my graduating class, in 8th grade. We were taught by nuns — it was just what we knew. I loved it, though. It was intimate. Class sizes were small.” (The school later merged with several others to become Brookline Regional Catholic before its shuttering in 2019.)

Even as McConnell-Serio began playing at a high level with Seton-LaSalle Catholic High School, she didn’t yet realize how prominent basketball would become in her life. “It was a small Catholic school,” she says. “The same group played multiple sports. We would go from volleyball, to basketball, to softball.”

Things changed when she participated in national youth tournaments with the Amateur Athletic Union, or AAU — still a critical step in the development of young players today, but even more prominent then. “Back then … There weren’t all of these tournaments all over the country,” McConnell-Serio explains. “Then the recruiting started. That’s when, I guess, I really started thinking I would play in college.”

Long before a basketball career that would take her around the world — and lead to her induction, in 2008, to the Women’s Basketball Hall of Fame — McConnell-Serio enjoyed growing up in a neighborhood that carried the benefits of both the suburbs and the city.

“We were very close to Downtown; it was a five-minute drive. A lot of times, when we would go shopping, we would take the bus Downtown … But growing up, we played in the street.”

Today, McConnell-Serio and her family live in Upper St. Clair; while she sees some similarities to her own upbringing, “not many kids walk to their friends’ houses, because you live in different neighborhoods.”

Back in Brookline, however, her parents still live in the same house where she grew up — within walking distance of the playground where her storied career began.