Growing Up in Bloomfield: Tom Savini 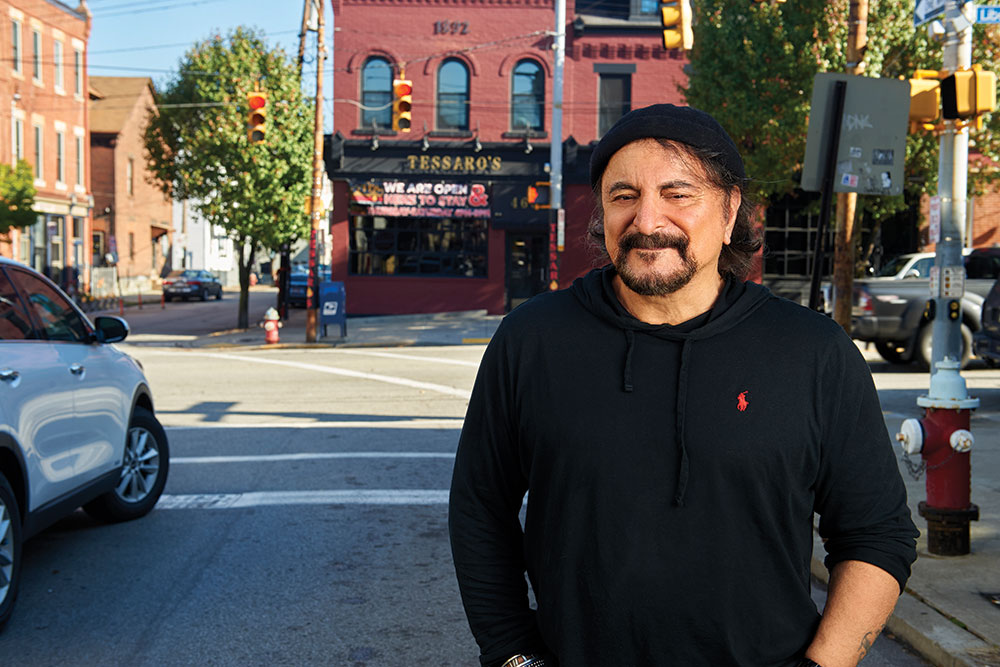 Home truly is where the heart is for Bloomfield native, actor and special effects artist Tom Savini. He still lives in his childhood home, which he’s made his own by building additions including a gym, studio and garage.

“I’ve never lost my sense of home because I’m still here,” he says.

Savini grew up in Bloomfield in the ’50s and recalls fond memories of bopping around the neighborhood.

“You had food vendors and drugstores — where I used to get ‘Famous Monsters of Filmland’ magazine — and the Plaza Movie Theater,” he says.

Savini goes on, listing bygone Bloomfield shops with perfect memory, as if he’s young again and about to head out for an adventure. Maggie Moore’s Candy Shop, with its cases of penny candy. Next door, a food market. Next to that, a bakery. The Peerless Department store, now a Citizen’s Bank, where Savini would buy a hotdog and a Coke for 25 cents and read “Little Lulu” comic books.

When Savini became interested in special effects makeup, he would travel to Essers Costume Shop to buy crepe hair and spirit gum to practice “messin’ up [his] face.”

As Savini grew up, he attended Point Park University to pursue a career in journalism and worked as a combat photographer in the Vietnam War. After returning to the states and working at a repertory theater in North Carolina, he took advantage of the GI Bill and attended Carnegie Mellon University.

Today, Savini has made an illustrious career out of scaring people. Savini recalls hanging fake bodies from the trees that used to line Taylor Street during Halloween when he was younger. Now, Savini owns the last remaining tree on the street. However, he’s upgraded from fake bodies in trees to a 12-foot skeleton from Home Depot that has haunted the Internet.

“They don’t sell them anymore,” he says. “You can’t even order them online. So I got the last one, and that was a display model.”

In quarantine, Savini and fellow special effects artist Jason Baker are making COVID-19 face masks that resemble movie monsters, like Jason Voorhees from the “Friday the 13th” franchise, which Savini worked on.

“Just for some people, Halloween is every day,” he says.

Baker is a graduate of the Tom Savini Special Make-up Effects program at the Douglas Education Center in Monessen, as well as the George A. Romero film school there. The program offers an associate degree that has, over its 20 years, attracted students who have worked on countless films and TV shows, such as “The Avengers,” “American Horror Story,” “Stranger Things” and “The Walking Dead.”

In June, artist Jeremy Raymer painted a mural of Savini between 40th Street and Almond Way in Lawrenceville.

“My studio was in Lawrenceville for 14 years, so I think it’s kind of apropos,” he says. “To me, it’s like having a star on Hollywood Boulevard.”

Despite working all over the world, Savini always comes back to the neighborhood that his parents immigrated to in 1917.