Is the bar stool at PNC Park's new Bowtie Bar the best seat in the house? 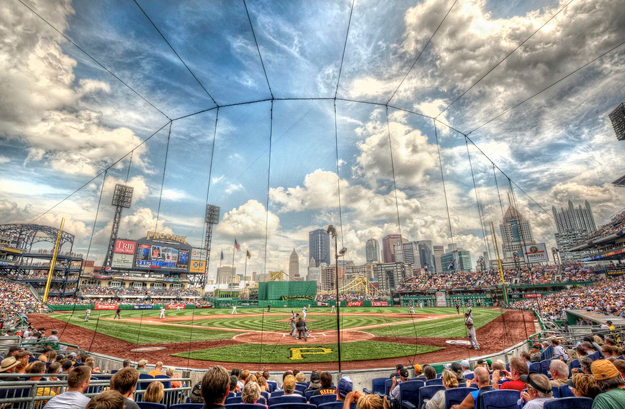 After an inspiring opening series and a moderately disastrous first road trip, your Pittsburgh Pirates are returning home for the second homestand of 2012. They carry with them a mildly alarming 5-7 record, an almost-certainly busted prospect in Pedro Alvarez, an encouraging but injury-prone pitching staff and more than a handful of batting averages that are yet to hit triple-digits.

With all due respect to my fellow PM blogger Virginia Montanez, this might not be the year.

So if you’re heading to the park this weekend to watch the Pirates try to find their footing against the defending world champion St. Louis Cardinals, odds are you might need a good, stiff drink at some point. Fortunately, the folks at PNC Park have come up with one of the most significant additions to the stadium in years: The just-opened Bowtie Bar, a full-service bar squished into right field.

The bar replaces what was essentially some dead space on the concourse down the right-field line. This little patch of territory boasts a nice view of the field on one side and a nice view of the skyline and river on the other, so it’s something of a head-scratcher that it took twelve years to figure out what to do with it.

After all, the answer was obvious. This is Pittsburgh, after all. Got some space? Put a bar on it.

The name comes from the iconic red Budweiser logo, which you probably never noticed was in the shape of a bowtie until this moment. Beer snobs will be pleased to learn, however, that the bar is not Bud-exclusive; draft offerings include one of my personal favorites, Stella Artois, as well as the citrus-flavored Shock Top. (Okay, Shock Top is another brand from Bud parent company Anheuser-Busch, and Stella is distributed stateside by that company, but don’t hold that against the place.)

There’s also a more robust bottle list in the Bowtie Bar than you’ll find at most other locations in the park, and — perhaps most importantly — a full-service bar, with wine and cocktails and everything. It’s a massive upgrade over normal stadium alcohol options, most of which are the one beer or (if you’re lucky) the other beer.

As for the place itself, it’s a bit basic; there are seats at the bar, elevated picnic tables, bar-style seating with a view of the field, and plenty of room to stand. During a crowded game, you might have a rough time getting a view of the game in progress, but they’ve got a healthy number of flat screens hanging above the bar for your viewing pleasure. (Although it must be noted that the TVs are on a delay, so if you’re watching intently, you’ll hear the crowd react a good while before you see what they’re cheering about.) But on days when the stadium is only half-full, you shouldn’t have much trouble grabbing a beer and claiming a spot with a fine view of the field. If you find yourself with a so-so ticket on a day where the crowd is thin, the Bowtie Bar may well be a better place for you than your seat itself.

It also serves as an excellent place to hide out during a rain delay. The open-air side of the bar is shielded from the elements, so run down here as soon as the teams flee the field; you can sip a drink in comfort while the grounds crew commiserates with the umpires for the next hour or two. Admittedly, the Hall of Fame Club — the full-service bar and restaurant in the outfield with ample seating — is probably a better choice for these situations, but it also fills up almost instantly even with a scant crowd, so you may have better luck in the Bowtie Bar.

Alas, the Bowtie Bar is not yet perfect. On opening day, they clearly hadn’t worked out the kinks in service and it took over an inning to get a beer, but once they get the swing of things, I think it’ll be one of the best places (other than your seat) to hang out in PNC Park. The really remarkable thing about it is that it feels like a regular sports bar that happens to be located within a few feet of a Major League Baseball game. It’s another one of those little touches that make PNC Park a world-class place to see a game — while remaining distinctly Pittsburgh.