Germany's Fun Fall Export Gets a Kickoff at Hotel Monaco

The rooftop biergarten at the Kimpton Hotel Monaco Pittsburgh is celebrating the beginning of its first-ever Oktoberfest. 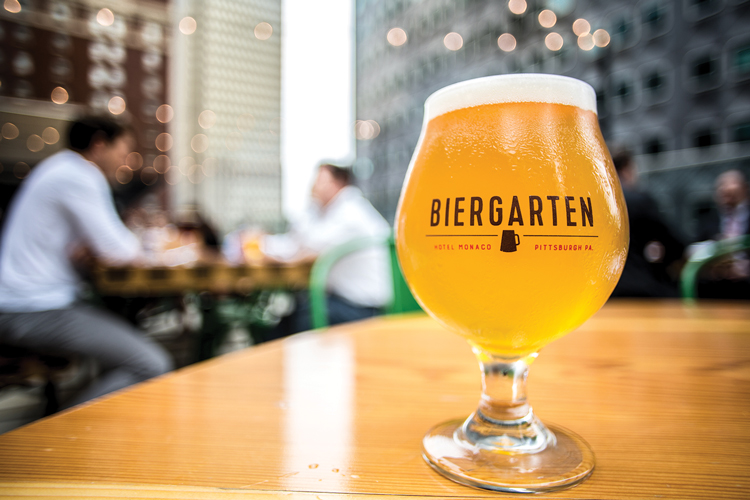 Oktoberfest: You know the name. You know it’s German, and you know it has something to do with beer. (Lots of beer.) If you are new to the fall tradition, here’s what you need to know: Munich’s Oktoberfest is the largest annual festival in the world and celebrates German culture (yes, with an emphasis on beer). Naturally, German immigrant communities brought the festival to Pittsburgh soil. And with that, you’re caught up — let the 182nd Oktoberfest begin! This Saturday, the rooftop biergarten at the Kimpton Hotel Monaco Pittsburgh — one of the city’s most-glamorous bar scenes — is celebrating the beginning of its first-ever Oktoberfest. The chic hotel’s open-air roof will serve seasonal drinks along with traditional German dishes in honor of the first official day of the 2015 celebration. Tickets are $20 and include a collectible beer stein, the first fill and an edible souvenir. Can’t make it this weekend — or just want more? Don’t worry; selected German specialties will remain on the menu until the end of September, so your favorites won’t disappear too quickly.
(620 William Penn Place, downtown; 3-7 p.m.; tickets and more info here)

REINVIGORATING THE AUGUST WILSON CENTER, WITH A SHOT OF SOUL
The August Wilson Center for African-American Culture was pulled back from the brink of redevelopment last November, giving Pittsburghers the promise of more world-class programming at the beautiful downtown facility. After months of planning, the schedule at the multifaceted venue is taking shape — and it includes a lineup of concerts that should have soul music fans dancing in the aisles.

IN THEATERS: The life story of notorious gangster Whitey Bulger gets the big-screen treatment this weekend, as Johnny Depp plays the mafioso in “Black Mass,” as directed by “Out of the Furnace” helmer Scott Cooper. Elsewhere, another teen scifi franchise keeps chugging along in “The Maze Runner: Scorch Trials,” a snowstorm wreaks havoc on mountain climbers in “Everest,” David Oyelowo and Kate Mara star in the Thriller “Captive” and Lily Tomlin headlines the indie flick “Grandma.”

Poetry, comedy, performance art and much more will fill the stage Friday at Trans-Q Live!, an evening of queer art and entertainment at the Andy Warhol Museum. Click here for tickets and more info.

This article appears in the September 2015 issue of PMWeekend.
Categories: Things To Do