Future Tenant's 10th Birthday Party is Cooler Than Yours Was

The boundary-breaking art gallery celebrates its birthday with a Bakery Square bash. 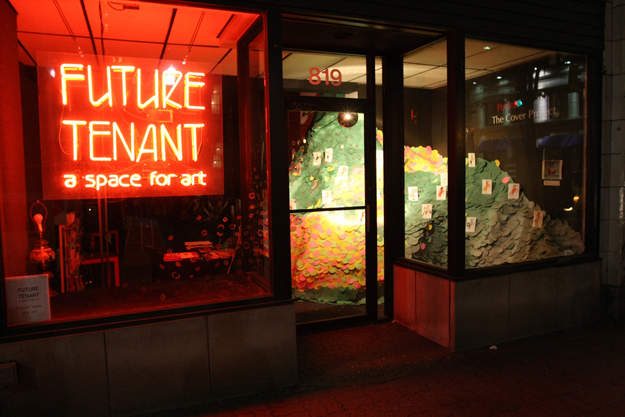 Future Tenant's 10th birthday party is cooler than yours was
Even as more and more art galleries have sprung up around town —  clustering in groves of fine art in Lawrenceville, Shadyside and elsewhere — downtown’s Future Tenant Gallery has remained among the most remarkable. Founded as a joint venture of the Pittsburgh Cultural Trust and a pair of Carnegie Mellon schools (the College of Fine Arts and the Heinz College Masters of Arts Management), and staffed entirely by a rotating student crew, Future Tenant has gained a reputation as a go-to center of boundary-breaking work — from painting and drawing to theater and performance art.

And when you’ve kept a space like that thriving for a decade, it’s about time to celebrate. Future Tenant’s 10th Birthday Party will be held at Bakery Square tomorrow — and like every event hosted at the new East Liberty hub (presented with Walnut Capital), it’s a can’t-miss soiree. Some excellent artwork will appear, both on display (from CMU Fine Arts grad students) and at an auction (from a generous list of local artists); music from the likes of DJ Soulstring and Lungs Face Feet will keep you moving; and there’s an open bar stocked by the fine folks at Straub Beer and Woodchuck Cider. And, in a stroke of pure genius, a bouncy castle will be on hand. Free beer, great art and a bounce house? Sign us up!

Artist chat at Society for Contemporary Craft
Since the Society for Contemporary Craft is always eager to bring the public closer to the artists it features, the organization will be hosting one of its frequent artist talks tomorrow. Alexandra Raphael, a London-based enamelist, has mastered the difficult arts of plique-à-jour and cloisonné jewelry; she’s exhibited her work internationally. She’ll speak for free, as part of the SCC’s 40th anniversary year; throughout the summer, the Society will also offer a variety of classes so that you can learn these precise artforms, too.

Civil War resurgence
Without really trying, I’ve become swept up in history. Civil War history, to be specific; on the occasion of the war’s 150th anniversary, it’s been hard to avoid sporadic appearances from America’s great conflict. I made the trip to Gettysburg last fall; I’ve been drinking the brews of Arsenal Cider House; and I’ve been reading Don’t Know Much About the Civil War because, in truth, that title applies to me. Add a great new traveling exhibit from the Sen. John Heinz History Center and an upcoming fest at the Carnegie branch of the Carnegie Library, and things are getting positively 19th-century around here. For the full American-tinged roundup, read this week’s After Dark!

In theaters this weekend: If you’re coming off your Hunger Games hangover, the best cure is to just go see Hunger Games again; that’s what everyone seems to be doing. Failing that, there are some similarly fantastic new choices in the form of mythological sequel Wrath of the Titans and Snow White interpretation Mirror Mirror; there’s also the seemingly serious drama/romance/comedy thing Salmon Fishing in the Yemen and acclaimed Brit-horror flick Kill List. PM Film Editor Sean Collier will appear on the 102.5 WDVE Morning Show Friday at 7:15 a.m. to review Wrath of the Titans and Mirror Mirror, provided that he doesn’t go with the aforementioned flow and just see Hunger Games a few more times. Tune in Friday morning to 102.5-FM or DVE.com for Sean’s reviews!

Pittsburgh's "other" Sidney is celebrating the arrival of his new offspring, a pair of African penguins. Tomorrow, the National Aviary hosts its Hatch Party from 6-8 p.m., where you can get nose-to-beak with the new penguin chicks. Click here for more.

Campus Superstar is a city-wide event celebrating the local musical talent of university students in Pittsburgh within an "American Idol"-like production. Check out the competition this Sunday at 7 p.m. at the Carnegie Music Hall in Oakland. Click here for more.