From the Chef's Kitchen: Fried Chicken

Exclusive recipes, shared only with Pittsburgh Magazine, from some of Pittsburgh's Best Restaurants and chefs. This classic chicken dish comes from the kitchen of Kaya in the Strip District. 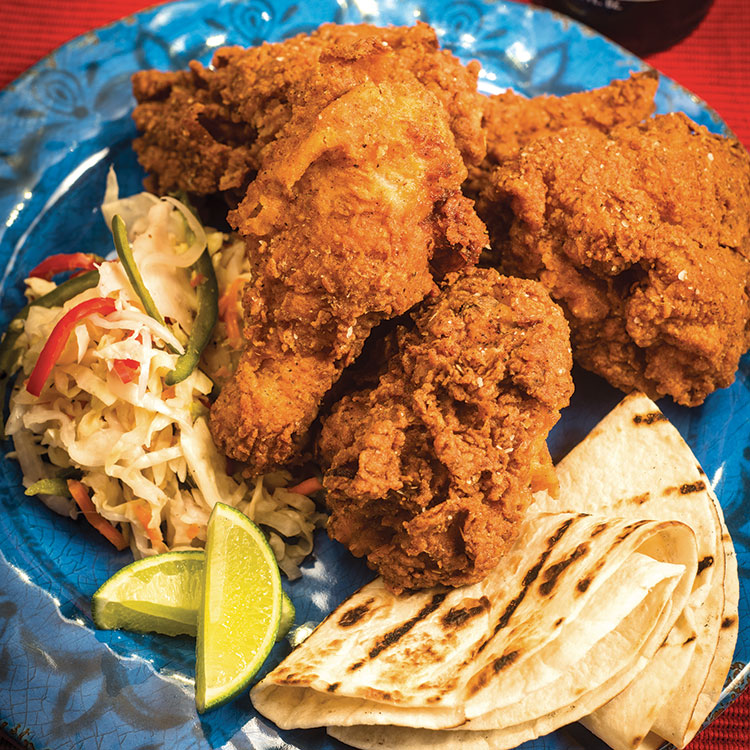 Remove chicken from towel and place in a shallow baking dish. Cover to barely coat with buttermilk.  Allow to stand for 30 minutes.

Prepare deep fryer — either a home fryer or a heavy-sided pot. Place a candy thermometer in oil. Bring to 350 degrees.

Remove a few pieces of chicken from the buttermilk. Toss in flour. Shake off excess. Place in fryer oil. Cook until chicken begins to float. You may want to turn it once. Drain on paper towels. Repeat with remaining chicken.

We like to eat the chicken with the tortillas by pulling some of the meat off the bone, placing it on a tortilla and adding Kaya slaw and chipotle barbecue.

Place all ingredients in a nonreactive pot. Bring to a boil. Allow to cool completely.

Combine ingredients in a nonreactive pot. Bring to a boil. Reduce to a simmer. Cook for 20 minutes. Purée with caution.

Julienne cabbage, peppers and onions. Grate the carrot on a box grater.

Combine ingredients and dress with sugar, salt, pepper, white vinegar and citrus juice. Allow to stand for at least 1 hour before serving.