From the Chef's Kitchen: Beef Tartare with Black Garlic, Celery, and Pickled Mushrooms

Exclusive recipes, shared only with Pittsburgh Magazine, from some of Pittsburgh's Best Restaurants and chefs. This creative starter comes from the kitchen of Cure, helmed by its award-winning chef Justin Severino. 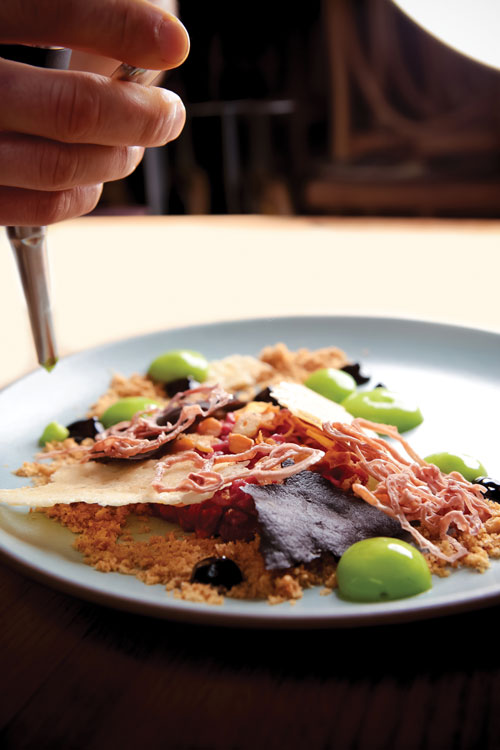 Prepare elements for this recipe in the following order:

20 minutes active prep time; should be done at least 2 hours prior to assembly.
Place destemmed mushrooms in medium mixing bowl.
Combine all other ingredients in a saucepot, bring to a simmer and remove from heat. Salt and pepper to taste. Pour hot liquid over mushrooms, wrap tightly with plastic and set in a warm place for 1 hour. After 1 hour, place in refrigerator to chill.
Remove mushrooms from cold liquid and mince in food processor. Set aside and refrigerate for final assembly.

Add potato and celery root to food processor, cover with just enough water and process until fine. Pour mixture through fine mesh strainer and discard liquid. Place strained mixture in a medium pot and cover with vegetable oil. Whisk over medium heat (approximately 250 degrees) until golden brown and crispy.
Strain from oil and spread over paper towels to remove excess oil. Season with salt to taste. Set aside at room temperature for final
assembly.

Place black garlic, balsamic and egg yolk into food processor to combine. While processor is running, slowly add vegetable oil to emulsify.
Place in refrigerator to reserve for final assembly.

¾ cup raw celery juice
1 egg white
You will need an iSi can and 2 chargers for espuma; iSi is a brand of siphon, and you insert the chargers to pressurize the whipper and produce the whipped foam.
Place egg white and celery juice into iSi can, charge twice and place in refrigerator for final assembly. *Sliced, raw celery may be used instead of celery espuma.

Peel 4 stalks of celery with vegetable peeler. Cut peeled celery into long, thin strips (lengthwise). Place cut celery in a small mixing bowl of ice water for 10 minutes to make crispy. Cut strips on the bias, slice thinly and reserve for final assembly. Use raw celery in step 4 of assembly, placing liberal amounts on each dish.

Combine diced beef, chives, olive oil and mushrooms; season with sea salt and pepper. Place small, tight piles of beef mix evenly on chilled plates. You can use a ring mold for ease. Decorate plates with celery sand and Parmesan cheese. Express yourself — place 4-6 dollops of aïoli and 4-6 dollops of espuma on each dish. Eat and enjoy.
Serves 4-6. (Chill plates ahead of time.)