Snag one — or a few — for just $1 each while they’re offered, now through December. 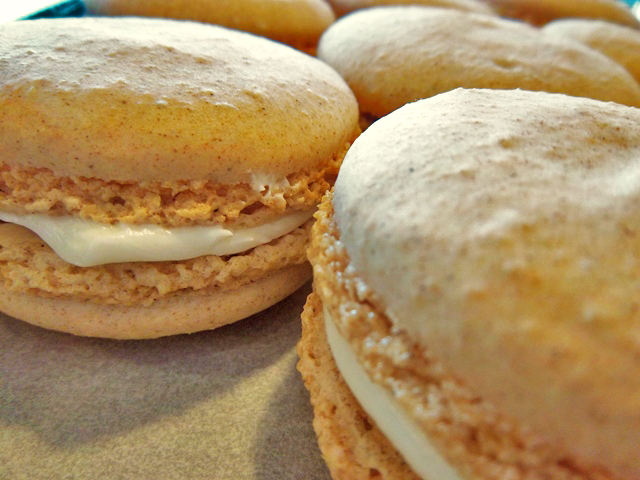 OAKMONT BAKERY’S SEASONAL MACARON IS A HIT
Pumpkin pies, rolls and doughnuts line bakery shelves this time of year. One seasonal treat that proves the best things come in small packages is Oakmont Bakery’s pumpkin macaron. With a crispy exterior, gooey center and flecks of spices, this French-inspired delicacy is good as is, but the addition of a cream-cheese icing elevates its flavor profile. Snag one — or a few — for just $1 each while they’re offered, now through December.

PITTSBURGH EPISODE OF "BIZARRE FOODS" AIRS
Eating pasta from Dish Osteria and trout from Wild Purveyors is pretty customary. Chef Andrew Zimmern tried those two Steel City offerings while he was here in August; we're fairly certain that neither made the cut for the Pittsburgh episode of "Bizarre Foods America." But we can guess what did.

Zimmern, who seeks out culinary oddities, devoted his short stay in the city to filming bits of footage for "Pittsburgh: Catfish & Kiska," which airs Monday night. Among the places he ventured were Silver Star Meats in McKees Rocks, Cure in Lawrenceville and the previously mentioned Wild Purveyors in Lawrenceville. Zimmern’s food picks for our episode show how the city's culinary scene has progressed while still valuing old-favorite dishes — much like the pierogi updates we outlined in our November cover story.

CENACOLO SERVES FAVORITES FROM FEDE
For the past eight years, the name Fede has graced many local eateries’ menus. The esteemed pasta purveyor expanded its operations last month with the opening of Cenacolo. The Italian restaurant seats 40 diners and serves the same handcrafted signature pasta locals have come to know and love. In addition, menu highlights include antipasto dishes such as polenta and an assortment of meats — sopressata, capicola and bresola are just a few.

This article appears in the November 2013 issue of Eat Street.
Categories: PGHeats