Fitness You’ll be Feeling in the Morning

IM=X Pilates and Fitness combines exercise science and tradition for a full-body workout. 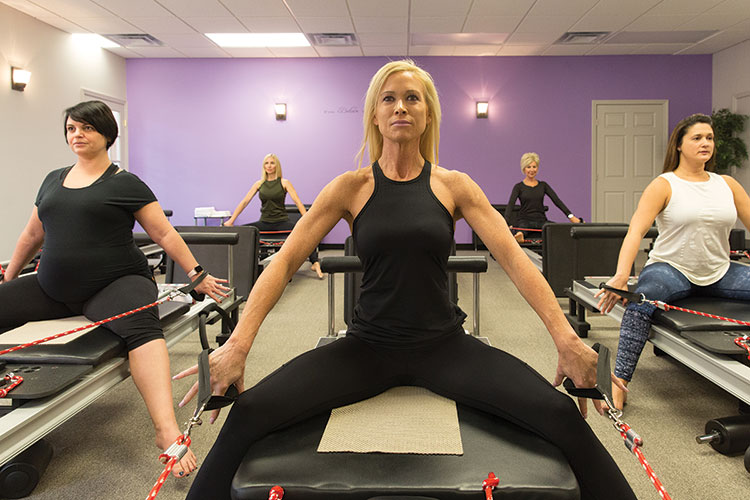 There’s an image in my head of Pilates, and it basically looks like something out of a medieval torture chamber. The 11 “reformer” machines I’m staring at in the IM=X Pilates and Fitness studio in Wexford play into that image perfectly. Long, black contraptions that look like a strange, low-to-the-ground bed with pulleys and springs and all sorts of things that my mother warned me nice girls should never know, care or ask about.

“Pilates is actually more about being kind to the body,” says my instructor, Joann Spencer, who also owns the place. “Core strengthening, body mechanics and understanding how to move from the right muscles and learn how to inhibit the wrong muscles from kicking in when they shouldn’t. Plus, stretching is key for injury prevention.”

The IM=X stands for “Integrated Movement = Exercise.” The woman who created and franchised her concept wanted to fuse exercise science with the techniques originally developed by Joseph Pilates in the 1940s. “It took out the risky stuff and made it safe and effective rather than, ‘Let’s just do crazy stuff because it’s crazy.’ But it’s still intense,” Spencer says.

Before taking any class, you’re given the opportunity to take an Introductory Private Session so that you’re already familiar with basic techniques and movements before diving in. Spencer leads me to one of the reformers and tells me to lie face up with my neck situated between two cylindrical-shaped pads. 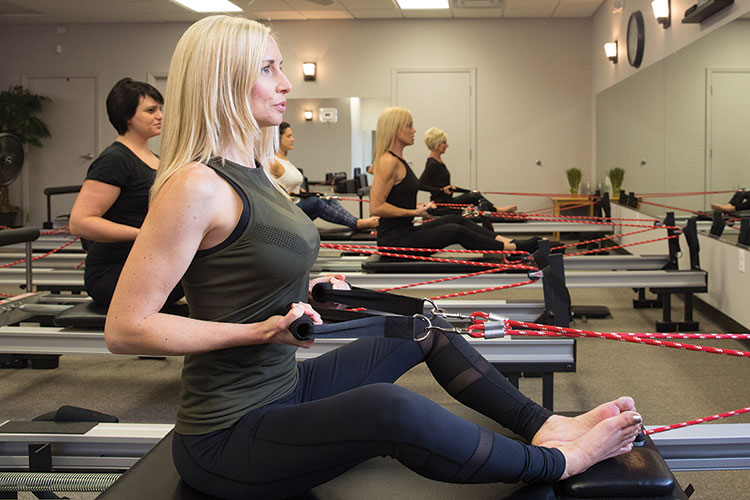 “First, we’re going to do leg presses,” she says, maneuvering my feet onto a padded bar. “We’ll go through the fundamentals of breathing and body positioning. The leg presses warm up the hips and legs and connect the core muscles though breathing.”

As I begin, she stays on me, paying careful attention to whether my core is engaged and that I’m inhaling on the easy parts and exhaling on the harder, repositioning my limbs correctly, and most importantly, catching me when I tense up my shoulders and neck to accommodate the resistance.

I immediately feel the difference between doing it right and doing it wrong, and it requires a good amount of concentration to do the sequences correctly. The more I focus on my core and whatever body part I’m engaging the most, the better it feels, both in intensity and result.

“There’s a very specific reason why we do everything,” she says.

We continue through various series that target the abs and upper body as well as a cardio-esque jump sequence in which I remain lying down but use a cushioned platform at my feet to spring off like a trampoline. Throughout, the range of motion combined with the resistance is intense — but not in a way that’s agonizing. It’s as if my muscles and joints are finally being firmly, but gently, pulled in all the right directions.

Tip: Going barefoot or wearing non-skid socks will definitely help to stabilize your feet. Also, expect to start feeling it on day two.

This article appears in the February 2018 issue of Pittsburgh Magazine.
Categories: From the Magazine, Medicine and Health Features