With a bit of work, the new Lower Lawrenceville tavern has the potential to become a solid neighborhood watering hole. 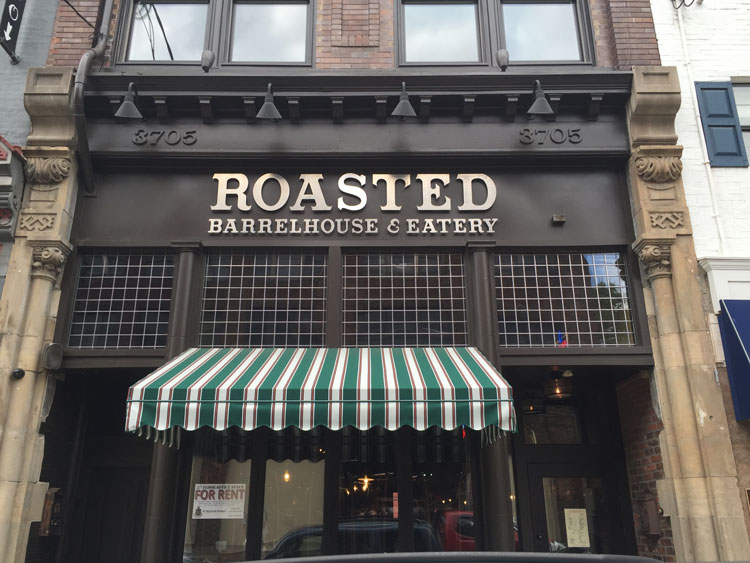 Roasted Barrelhouse & Eatery, a new bar and restaurant in Lower Lawrenceville, brands itself as a “Legendary Neighborhood Hangout.” After visiting the other night, it’s clear that Roasted is still quite far from legendary status, though it certainly has the potential to thrive in the neighborhood hangout department.

Roasted opened late last month in the building previously occupied by Eclipse Lounge. The establishment still is in the very early stages of its development; restaurants often go through some growing pains during the transition from plans to patrons, and that’s the case here.

What I like best about Roasted is that it’s a counterpoint to the recent bar and restaurant developments in Lawrenceville. There’s nothing cool/hip/trendy about Roasted; it’s simply a good, solid place for people to hang out. It already feels like an old-school neighborhood watering hole, and it’s always nice to see more of those in Pittsburgh.

Ownership did a full refurbishment of the street-level space. The old glass-block windows are gone, replaced with a bright, open view of the street (and limited outdoor seating in nice weather). There’s a long, sleek bar, tile floors, wood booths and an exposed brick wall in the front room. I’d recommend checking out the back room, if only to see the smartly curated collection of old-time Pittsburgh photos. Just don’t look up on your journey between the two rooms, or when you’re sitting at the bar. An oversized statue of the Blues Brothers awkwardly looms large above in the barroom’s loft.

The staff at Roasted is extraordinarily friendly. My friend and I experienced a couple of read-from-a-paper-because-I’m-not-sure-about-the-menu moments, but even those came from a desire to want to get things right instead of winging it. They’re trying hard, they’re interested in connecting with their customers and they’re warm; all of that is something to celebrate.

The tap list will please just about anyone. There’s a strong tilt toward Pittsburgh's craft breweries, with East End, Full Pint, Arsenal Cider, Penn Brewery and Church Brew Works all represented; fans of national breweries have a few options, too. Aside from the Arsenal cider, all beers cost less than $6.

I appreciate that the bar team built a cocktail list that sticks to the classics instead of trying to haphazardly create their own spins. It’s nice to see a neighborhood bar aim to serve a decently crafted cocktail, and, although Roasted might not be on the top of my list of cocktail bar recommendations, I get the sense it’ll be a good place to grab a drink. My Manhattan was a little too sweet, but the Pimm’s Cup I tried was on-point with the hot summer night.

I wish the food were up to snuff. I sampled a couple of sandwiches that sounded much more enticing than they tasted. The meatball I ate wasn’t bad, but everything else left me wishing that the kitchen would get its act together. Roasted’s menu touts that all the meats served in the sandwiches are slow roasted in-house, but, as of now, they need to do a better job of it. I’d also like to see a vegetarian option on the menu.

Roasted has a lot of potential to become a go-to destination as a fun, casual neighborhood joint in the middle of a rapidly developing stretch of Butler Street. It’s not there yet. I do hope that as the space settles in, ownership pushes themselves to dig a little deeper.