Why young athletes should never take the field without a mouthguard. 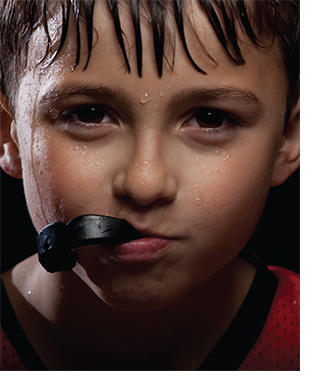 Okay, here’s something that can bring a frown to a sports dentist: Mouthguards don’t come in teal. Yet.

At least that fact put a temporary damper on Dr. Thomas Green’s enthusiasm. He was happy, certainly, that the girls softball team he was working with wanted him to custom fit mouth guards for the entire team, something that would’ve been extremely unusual just a decade or so earlier — but to his dismay, he learned that while mouthguards now come in a rainbow of different colors, teal is not one of the many color options for mouthguards.

The girls wanted teal; it was their team’s color and all.

Oh, well. “I made them in black,” says Dr. Green, of Washington, Pa., who has been active in sports dentistry since the 1980s.

Adjusting to reality is a necessary skill for the men and women who practice sports dentistry. These are dentists, after all, whose specialty isn’t officially recognized by the American Dental Association. These are dentists who heavily promote the use of mouthguards as a preventive tool backed by evidence-based dentistry, only to be undermined by manufacturers who exaggerate non-scientific claims for mouthguards, much to the consternation and confusion of both parents and athletes. These are not the kind of dentists to fret excessively about the color of a mouthguard.

No, they tend to see the bigger picture.  Thanks largely to their efforts, more and more athletes — even the casual kind — understand that custom-fabricated mouthguards made by dentists can prevent dental injuries. Now, they wouldn’t play a sport without one.

“Mouthguards are much more accepted,” says Dr. Dennis Ranalli of the University of Pittsburgh, a past president of the Academy for Sports Dentistry. “Culturally, it’s much more of the thing to do now than it was 10 to 15 years ago. Which is very good.”

There is a chance, however, that part of the growing popularity for mouthguards has to do with claims that are difficult to prove. Some manufacturers contend they enhance performance. Other manufacturers say that you can prevent concussions by wearing the mouthguard they produce. The scientific community is skeptical of such claims, but the growing popularity of mouthguards indicates some portion of the public might believe them.

Michael “Micky” Collins, clinical director and executive director of the UPMC  Sports Medicine Concussion Program, sees no value in mouthguards as a form of concussion prevention.

“The science has not shown that to be the case,” says Dr. Collins. “Mouthguards are a great thing to use, and they help with oral trauma — but at this point, there’s not a shred of scientific evidence leading us to that conclusion.”

Mouthguards as a piece of sports equipment probably date back to the early 1900s, when a British boxer Ted “Kid” Lewis, had one made for a title bout. His opponent protested, saying the mouthguard gave him an unfair advantage. Which, you might say, was correct.

Boxing remains the only professional sport to require mouthguards, and only five collegiate sports — boxing, football, ice hockey, men’s and women’s lacrosse, and women’s field hockey — require them, but athletes in all sports voluntarily wear them. More importantly, young athletes and their parents see more athletes wearing them and that helps build acceptance.

“It’s like putting a seat belt on in a car,” says Dr. Ranalli. “It has become automatic.”

However, practitioners of sports dentistry do more than fit and promote the use of mouthguards. Dr. Ranalli, who retired this summer after 40 years in dentistry, contends that sports dentistry is a much broader subject than the public realizes.

For instance, he considers it the role of sports dentists to caution young athletes about the dangers connected with the use of smokeless tobacco. Many athletes, male and female, use the product, he says; for example, wrestlers use it to suppress appetite, which helps them make weight for a bout. The amount of oral trauma the habit can produce needs to be better publicized, Dr. Ranalli believes.

Another aspect of sports dentistry is studying the effects of excessive use of sports drinks, such as erosion of tooth structure. There are also risks associated with competing while wearing intra-oral piercings, Dr. Ranalli says.

But when veteran dentists who practice sports dentistry talk about their specialty, they also realize that while the public may not know all that they do, there is nonetheless a growing respect and awareness of the profession.  It wasn’t that long ago that the specialty basically did not exist. When Dr. Green attended dental school in the 1970s, students were trained on how to repair trauma to the teeth although the curriculum didn’t focus specifically on injuries caused by sports. It wasn’t until he was a team dentist and in practice that Dr. Green learned about mouthguards.

Now there’s an awareness of the importance of sports dentistry, and it can show itself in several ways — including players who invite the dentist who made the team’s mouthguards to its games. Even if the color isn’t exactly what they wanted.  Now, that brings a smile to a sports dentist.

This article appears in the August 2012 issue of Pittsburgh Magazine.
Categories: Medicine and Health Features