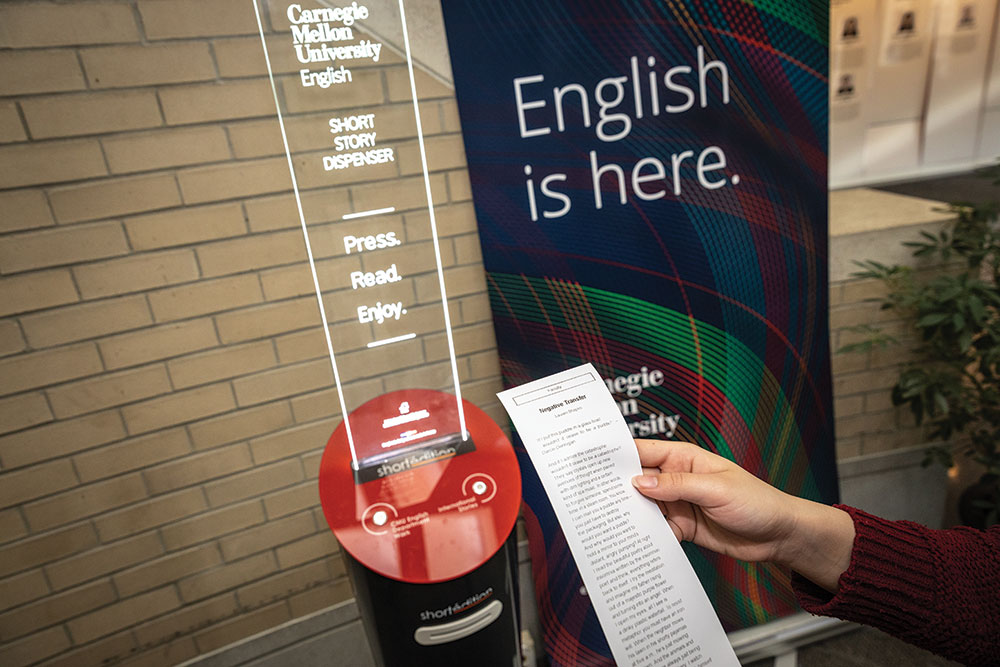 At Carnegie Mellon University, there’s a vending machine that doesn’t dispense candy bars or soda. Its contents are meant to feed the creative spirit.

Short Édition, a short story dispenser, came to the campus’ Cohon University Center this spring, bringing with it a slew of literary works from CMU and beyond.

Press the button on the left, marked “CMU English Department Work,” and you’ll get something penned by a professor and printed on eco-friendly and biodegradable paper. Press the right button, labeled “International Stories,” and out comes literature from a curated collection of creators from around the world.

Short Édition is the brainchild of a French company that has placed more than 200 story-dispensing machines around the world since 2011.

The idea to bring the apparatus to Carnegie Mellon stemmed from the hope to “reconnect [people] to the written word,” according to Ryan. It had already taken off in Europe, providing a creative way to pass time in lines. In recent years, Short Édition has been gaining traction in the United States.

“The nature of the machine is a very nice blending of the humanities and technology,” Ryan says; the goal is to share in a common love of English and the written word and to do so in a way that feels natural to the “CMU experience.”

“Reception has been overwhelmingly positive,” he says. “Most people find it to be just delightful and unique.”

The machine will remain, Ryan says, for as long as people are using it.

“I think it’s a great opportunity to …  see some of the humanities side of Carnegie Mellon, which I think is perhaps not as often highlighted but is equally relevant and equally excellent.”

This article appears in the January 2020 issue of Pittsburgh Magazine.
Categories: The 412