Skip the numbered jersey in favor of one of these stylish pieces produced right here in Pittsburgh. 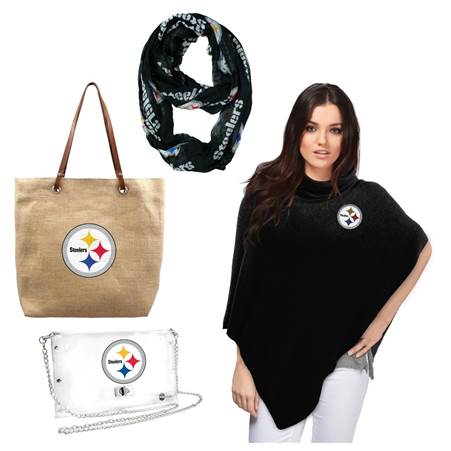 Watching a Steelers game — whether it’s at Heinz Field or at a tailgate party  — doesn’t mean you have to give up on your fashion game.

Pittsburgh’s Little Earth Productions — which also makes the iconic Terrible Towel — is debuting a line of hip Steelers gear that includes everything from scarves to ponchos.
If you’re going to the game, Little Earth also has stadium-approved clear envelope purses [$19.99] that will hold all your stuff and, better yet, get you through the security line fast.

“Football fashion is no longer just about jerseys and hats, as fans, particularly women, look to show their team spirit, while stepping up their style game at the same time,” says Rob Brandegee, Little Earth’s CEO.

This year’s collection includes a black and gold infinity scarf [$19.99] stamped with the Steelers logo, a trendy cowl neck poncho [$49.99] emblazoned with a crystal team emblem and the chic burlap market tote [$29.99], which is as good for the game as it is for grocery shopping.

If the Steelers aren’t your thing (gasp!), Little Earth — a longtime NFL licensee that has been churning out fashion accessories and apparel for professional and college teams since 1993 — is sure to carry gear with your team colors. The company is licensed to produce merchandise for more than 170 teams, including all teams in the NFL, NBA, MLB and NHL, and more than 70 colleges.

This article appears in the October 2015 issue of Gotta Have It.
Categories: #GottaHaveIt