Evgeni Malkin Wants His Cup Back

Geno's MVP-caliber season was fueled by a trying off-season. 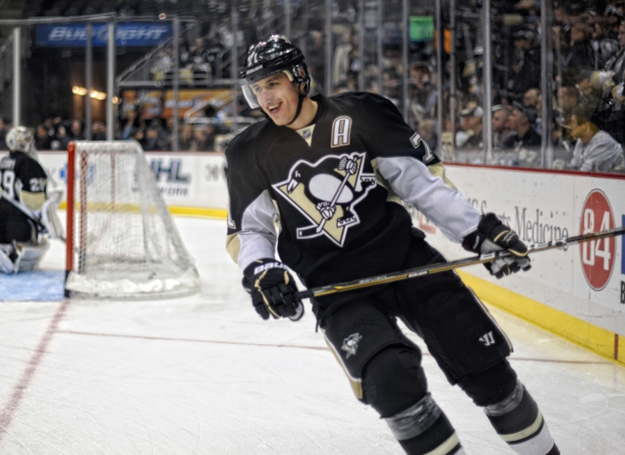 Evgeni Malkin was beside himself. Genuinely, beside himself. He was staring off into the middle distance, right above the placard hanging on the wall in the Penguins’ players lounge that displayed the Eastern Conference standings (the season hadn’t even begun, but someone had moved Washington to last place, right behind Philadelphia).

This was in October, on the eve of the season opener, and the purple scar on Malkin’s knee was still sore from the double-whammy of ACL and MCL surgery. As he sat in the chair answering my dumb questions, he kept flexing his leg. Answering in English, he exuded his trademark mixture of vague discomfort and wild-eyed excitement. He was really, really excited about the start of the 2011-2012 season, so much so that when he talked about Sidney Crosby coming back he literally would lose his breath. The mention of the talent in the locker room triggered a stream of consciousness explosion that sounded like, “Sid-best-Flower-best-Staalsy-hard-to-play-Nealsy-guys-score-guys-play-hard-Duper.”

Then I asked an innocuous question about his 2010-2011 season being derailed by injury, and suddenly he couldn’t find the words. He looked off into the distance and shook his head. Even in the midst of disappointing seasons, most athletes are on auto-pilot. They are somber in a completely reasonable, media-savvy way. Crosby is a master at this game. Not Malkin. He looked like he was ready to run out onto Fifth Avenue to challenge anyone in sight to an impromptu street hockey game.

I’ll never forget this moment. It had been an unbelievably trying off-season for Malkin. He had just lost close friends Igor Korolev and Gennady Churilov in the KHL air disaster, and it was clear that his heart was still back home. “I wish I could be in Russia at this moment,” he said. “I have to watch everything on TV and see how hard it is for the families.” When he wasn’t on the ice, he was rehabbing his knee and coordinating fundraisers to benefit the bereaved families back in Russia.

It would have been completely understandable if his mind was somewhere else at that moment, and yet there in the players lounge, he was verbally paralyzed with frustration. He was thinking about his adopted home and the people he felt he let down with a disappointing season. Despite hoisting the Art Ross, Conn Smythe and Stanley Cup in 2009, Malkin clearly still felt that he owed Pittsburgh something more.

“I not have good year,” he finally said. “First time I not play in playoffs. It was a tough moment. I feel like I can play but my knee not ready.”

There are some bizarrely dressed, weird-bearded people in NHL circles who will always question the passion and commitment of Russian-born players. Malkin has had to deal with this sentiment his entire career, and even after he became the first Russian-born player to win playoff MVP, some in the media jumped on two injury-plagued seasons as a sign of weakness. Malkin was well aware of that growing chorus.

“I read newspapers and sometimes people say if you win one Stanley Cup, you’re lucky,” he said. “They say maybe we get lucky in Game 7 against Detroit, so I want to win again. You win second time, it’s more important.”

I’ve had the great fortune of covering the Penguins for two years now, and people tend to ask me the same curious question about the players I interview.

Which, if you think about it, is a strange thing to ask about a person who is paid millions of dollars to shoot a puck. I mean, if sports is just pure escapism (a popular claim of the anti-sports crowd) then why does it even matter if an athlete is ‘cool’ or not?

I think it’s because hockey, to the fans who truly love it, is about much more than mindless escapism. Penguins fans fully invest their hearts in the team because they feel like the players, even the ones who come from the other side of the earth, truly and honestly care about the people watching them on the other side of the glass.

In a sportscape littered with numbnuts, used car salesmen, bulbus human sacks of recruiting violations, compulsive contract-wafflers, unabashed bad persons and the shin-kicking carnival barkers who cover them, hockey is the one last bastion untouched by the greasy hands of ESPN and the gravitational pull of the sports troll-o-sphere’s black hole.

I do not know if Evgeni Malkin is ‘cool.’ But I do know that he really, really cares. And that’s what hockey fans really want to know. That’s what’s more important than Stanley Cups and scoring titles. That’s why, tonight, when the Penguins and Flyers line up for the national anthem, when the house lights go down and the electric quiet fills the air, hockey fans will open their hearts in a way that fans of other sports can’t fully comprehend.