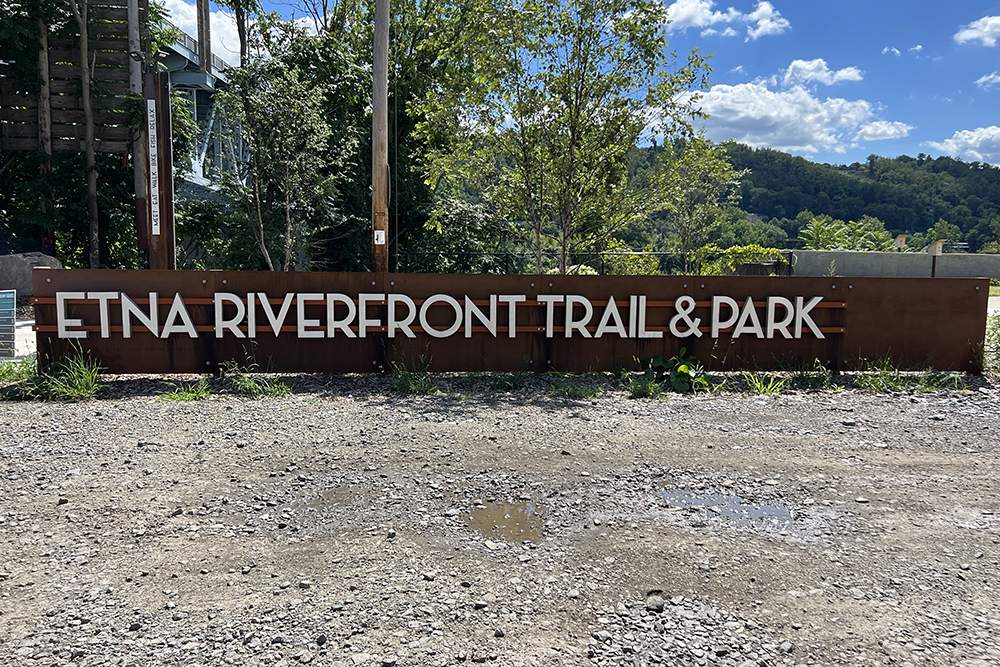 The Pennsylvania chapter of the American Planning Association just designated a new area as a 2022 Great Place in Pennsylvania — and it’s just a stone’s throw from Downtown Pittsburgh.

The Etna Riverfront Trail and Park in Etna was transformed from a 1.8-acre neglected space along the Allegheny River into a vibrant trail, marking a milestone in the borough’s revitalization efforts. The park’s transformation was a seven-year, three-phase process, which wrapped up in 2021.

In a press release announcing the park’s designation, the APA said the Trail plays a critical role in the region by fulfilling a significant trail gap in the Three Rivers Heritage Trail and simultaneously the Erie-to-Pittsburgh Trail, a 125-mile trail that connects to the Allegheny Passage.

The Trail and Park celebrate the site’s industrial past through its use of weathering steel, concrete, and wood, while also incorporating contemporary features. Some of the enhancements made throughout its renovation include a pavilion, stage, trail hub, scenic overlooks, ecological components and the use of safety barriers to provide opportunities for artistic expressions that interpret and celebrate the evolution of Etna.

The Trail and Park is a popular site for concerts, performances, outdoor yoga and other community events.

Historically, riverfront access has been scarce for the people of Etna, as the majority of the space was industrial, home to mills and other plants. When industry moved out, nothing new moved in, and the area sat undeveloped — a relic of an era long passed.

The Riverfront Trail and Park changed that, adding a green space to the Rust Belt.

The trail’s designation as a Great Place comes amid a considerable upswing for the post-industrial Etna. Last year, the Pennsylvania APA granted the same honor to Butler Street, the borough’s main thoroughfare. It cited its sustainable practices, accessible streets and significance in the community.

Also in 2021, the borough saw the complete renovation of a 1902 pipe mill, which will become a modern tech/flex space called 51 Bridge Street.

A speakeasy-style cocktail bar called Bitter End opened in Etna this summer, too — in a building that was used as a bar as early as the 1930s, following the end of Prohibition. Similarly, Rear End Gastropub & Garage moved into a former 1940s-era service station this summer, offering Etna a taste of history with a modern twist.

The Etna Economic Development Corporation, a nonprofit dedicated to the revitalization of Etna’s business district, has also helped to create a community garden, sponsor an annual farmer’s market and develop a stormwater management plan, among other initiatives.