Located within walking distance of shops and restaurants, the unit has a grand view of Downtown’s skyline. 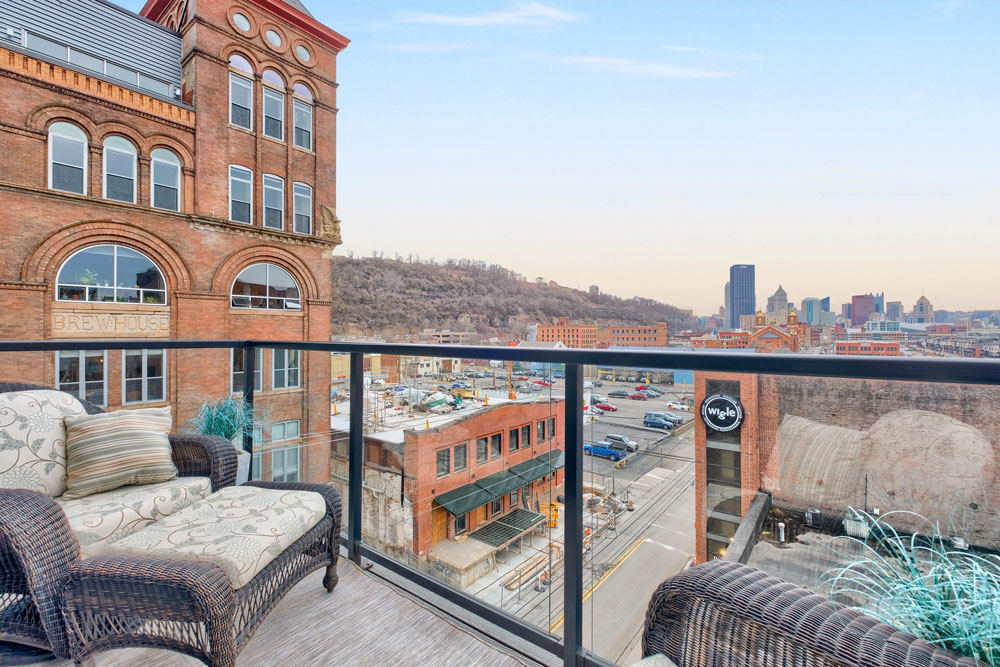 Karri and Scott Rogers had a specific plan when they left their traditional home in Greensburg for a spectacular urban penthouse in the Strip District — and that was to experience a different kind of lifestyle for a while.

They purchased Unit 504 at 2419 Smallman St., located just steps away from Wigle Whiskey and some of the best shops and restaurants around Pittsburgh. But now they say it’s time for them to move on.

“Our plan was to do this for five years,” Karri adds. 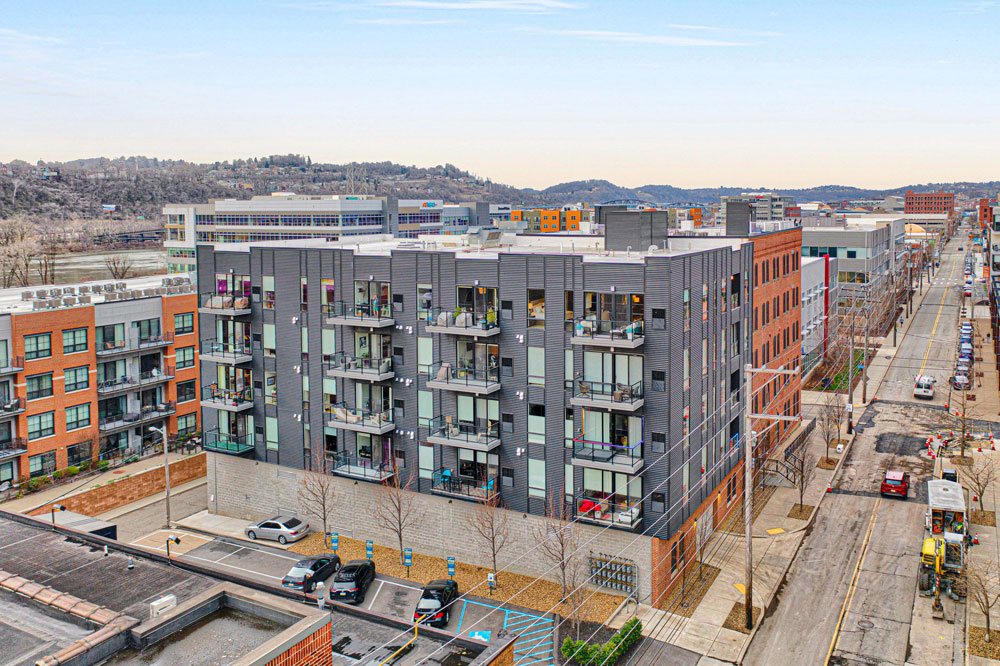 Although their move from a small city like Greensburg to a trendy, warehouse-lined neighborhood in a major metropolitan area might seem daring to some, they had a trial run of renting their condo before purchasing it.

“We lucked out with really good timing,” Scott recalls. “We had moved into a Downtown apartment and went from 3,000 to 1,000 square feet. We wanted more space and came across this when it was still under construction.” 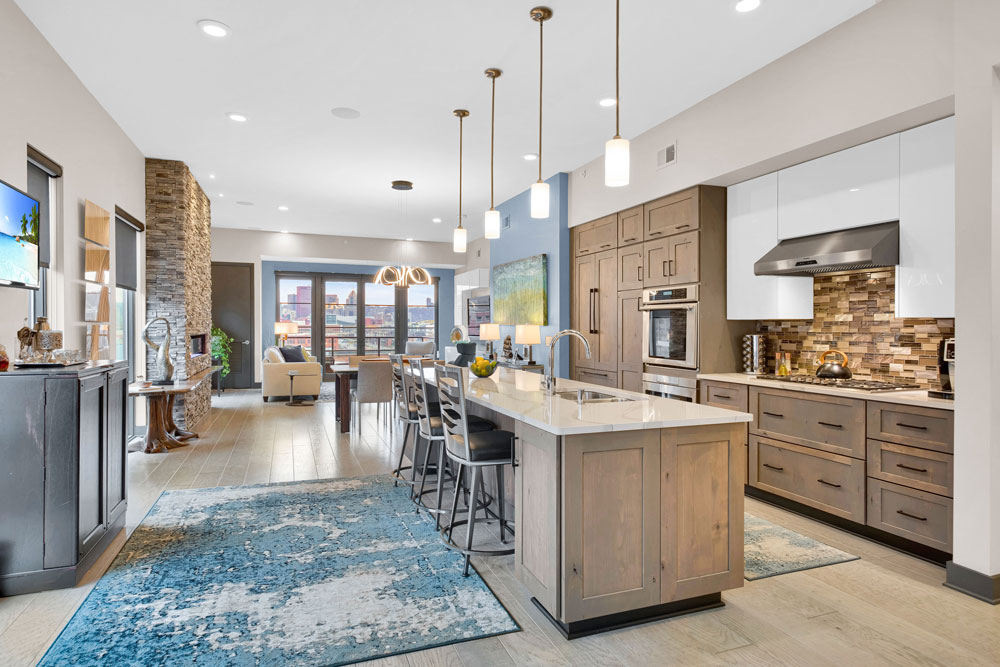 They landed the two-bedroom, two-bathroom, 1,900-square-foot unit before the coronavirus pandemic sent the real estate market on a roller coaster ride that made buying a place nearly impossible. Today, they have it listed for $1.25 million (MLS# 1546988, Kaedi Knepshield, Piatt Sotheby’s International Realty, 2419 smallman504.com). It is open by appointment.

While the space was little more than a white box when the couple originally saw it, it possessed a  great layout that included an open floor plan and a large kitchen island. They finished it with designer touches.

“We were happy we were able to pick the countertops,” Scott says. “Since then, we did a lot of work to it.” 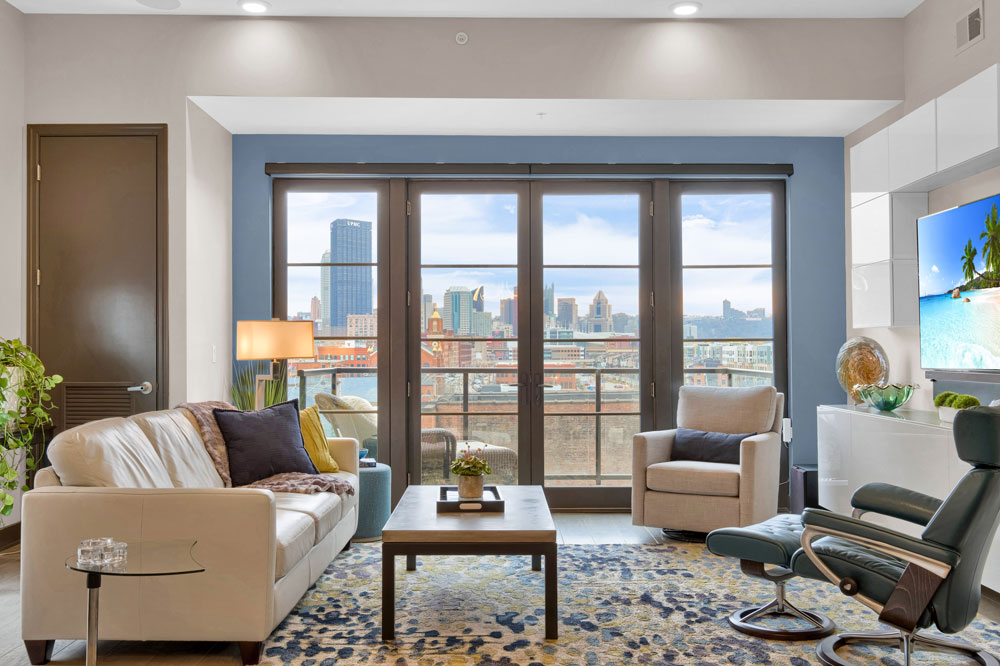 One thing that remained unchanged was the amazing views.

“Our unit is like coming through the Fort Pitt Tunnel,” Karri says. “You walk into one area and then when you come around the corner, a whole other view comes into play.”

One balcony faces east,  where you can rise early and watch the sunrise over the city. The other faces west, making it a great place to check out the sunset.

“We get to see the city transform itself from daytime to nighttime,” Karri says. “It’s so magical to see that every day.” 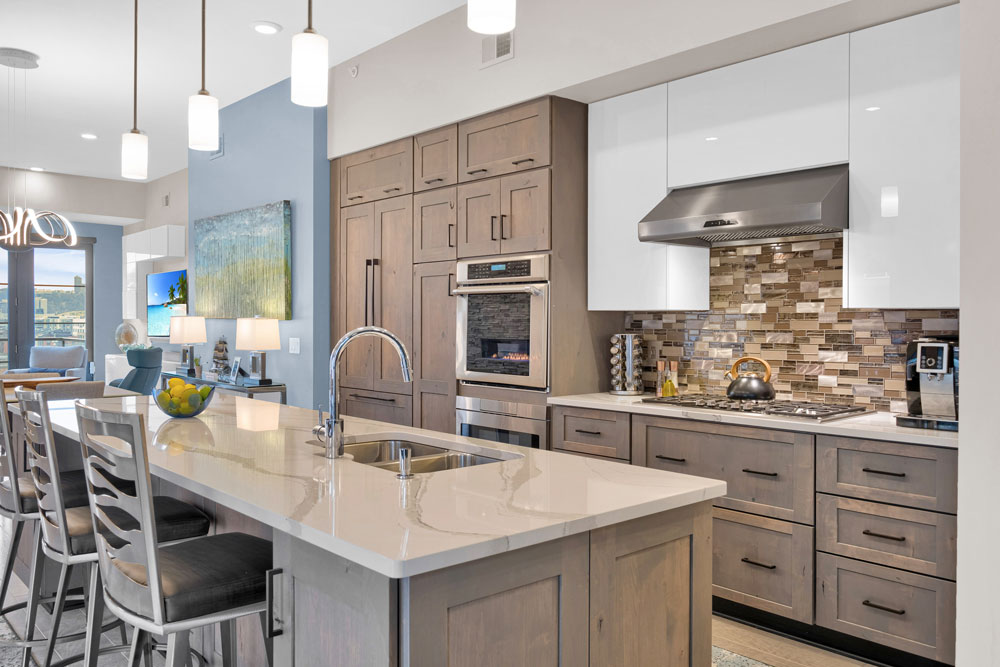 Anchored by a long center island topped with quartz countertops, the kitchen is a foodie’s dream. There’s also a pair of Thermador wall ovens and a chef’s cooktop as well as a large pantry wall.  The Thermador refrigerator, stocked with items from the Strip’s specialty food shops,  is hidden behind custom panels.

“We have had 25 people in here comfortably,” Karri says. 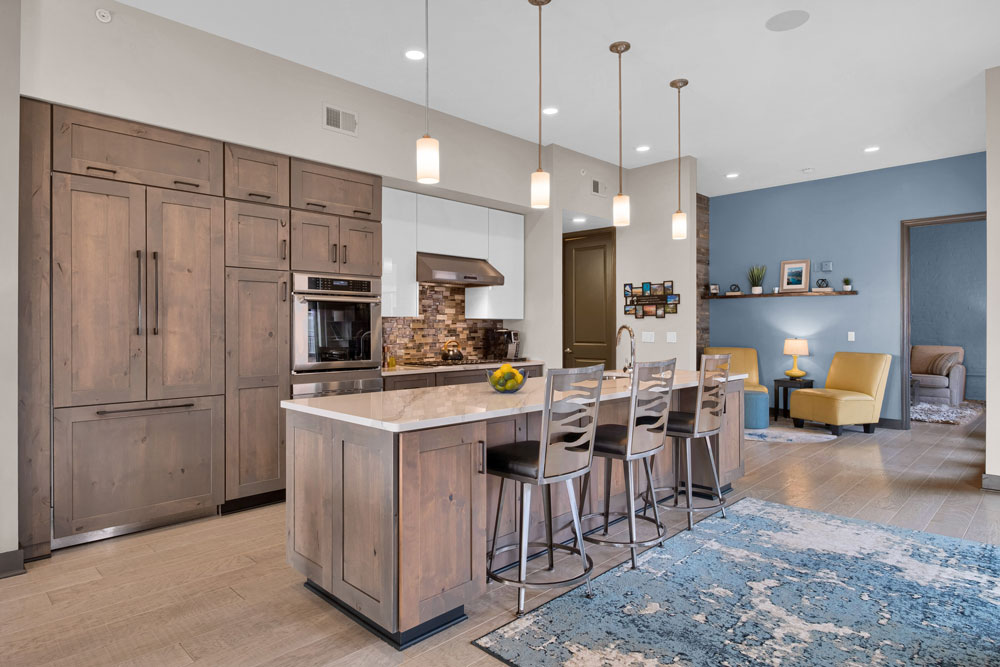 The couple, who loves to entertain, says their dinner parties usually consisted of theme nights, with lots of new recipes from all over the world being tested. The building committee also plans many events for neighbors to get to know each other.

“It is a very social building. We would have condo crawls— visiting each unit and checking out how everyone else designed their spaces,” Scott says. “It was a great way to meet the neighbors and create good friendships in the building.” 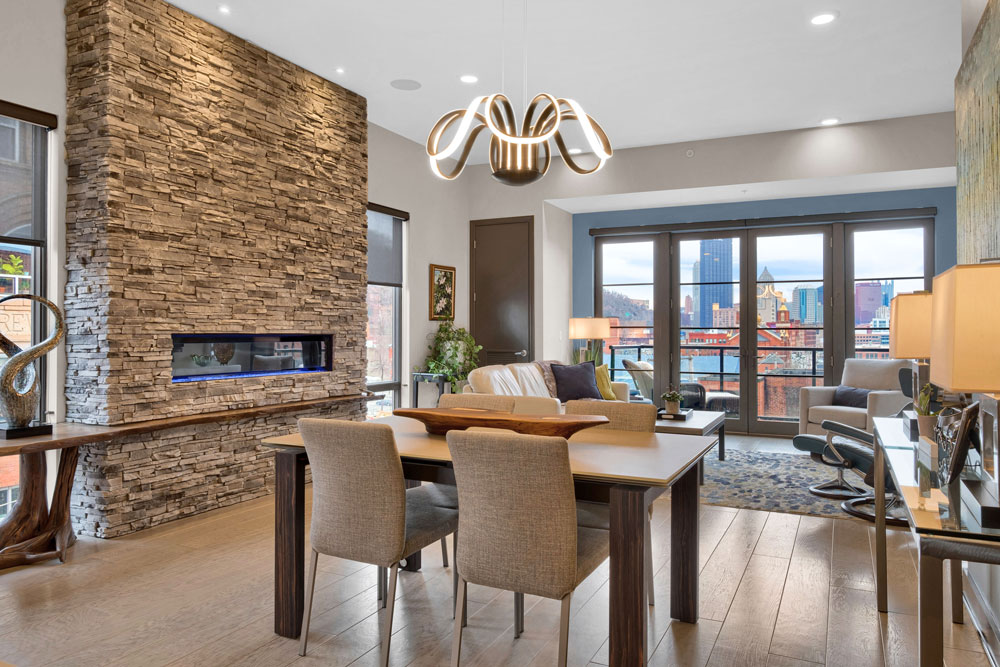 In the living room, the couple added a fireplace wall outfitted with a ledgestone façade, a gas insert and a very unusual live-edge low mantel that acts as a living sculpture.

“A timber company in Gibsonia made it for us from maple,” Scott says. “We wanted something that extended across the fireplace, across the window. It detaches from the fireplace. You can slide it around and use it in another place.”

Warm gray hues cover most of the walls, while a cool blue-gray was used for accents throughout the home as a way to define spaces and create interest.  The lighting was updated using modern LED fixtures, including a modern bentwood piece above the dining table.

“Everything we have here, we purchased to fit into the space,” Karri says. “Our table for four expands to 12 for entertaining. If a buyer is interested, we are open to selling most of the furniture with the unit.” 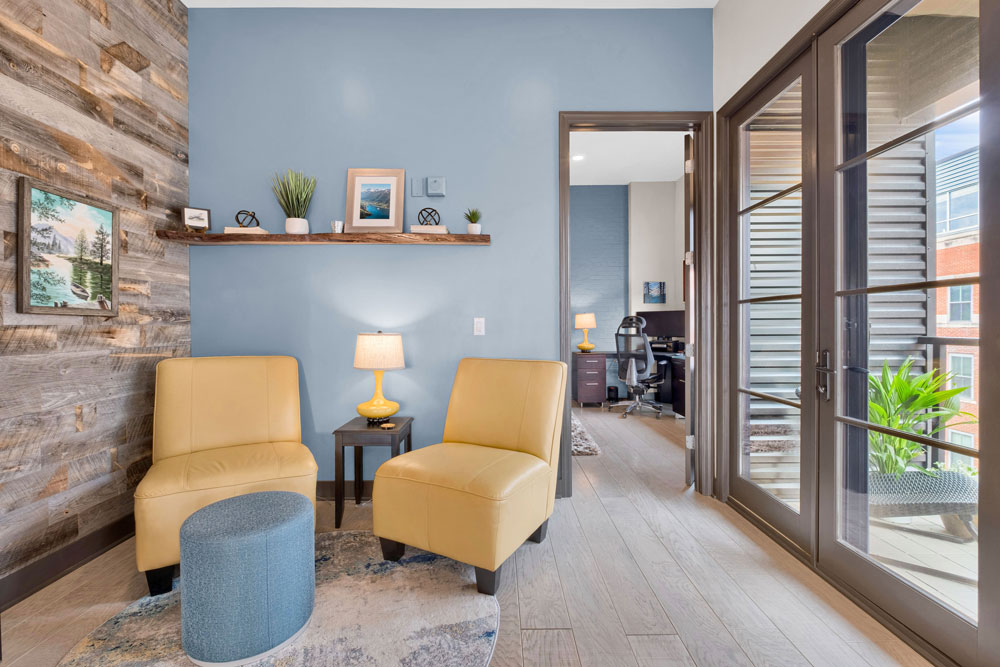 The seating area also features an architectural media wall that integrates the flat screen television, while the primary suite houses a roomy walk-in closet and a large bathroom that includes a double-sized shower and double-sink vanity separate from the water closet.

A second bathroom has a tub/shower combination, large vanity and plenty of storage space. At the end of the hallway, a large chandelier provides drama as it reflects into a modern gold twist wall mirror. 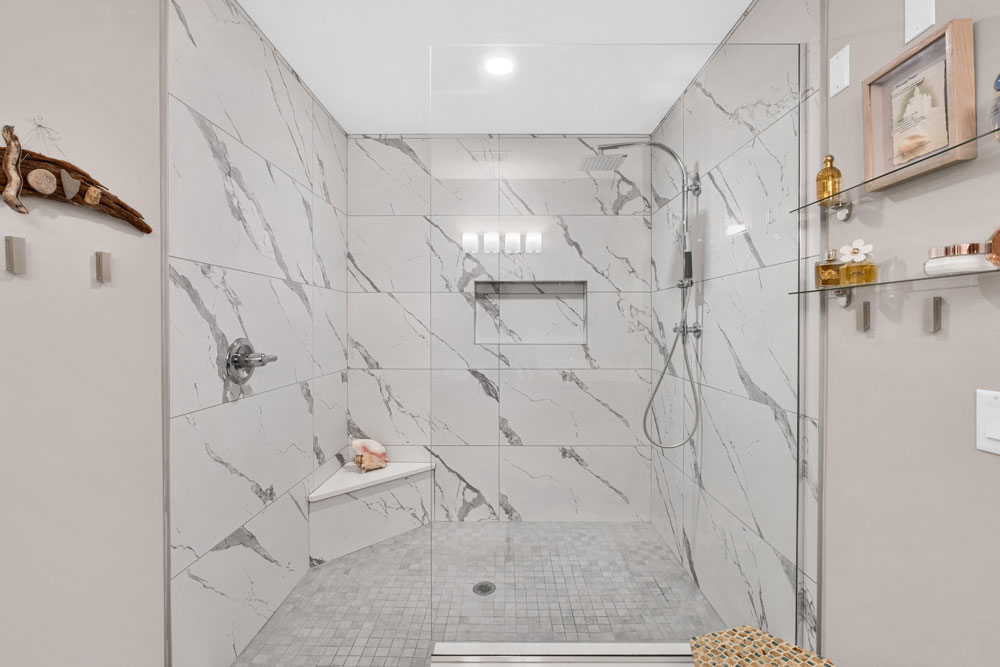 In the utility room is a stackable front loader washer and dryer. The building amenities include a newly renovated courtyard, gym, dog-washing station and a keyed, private garage. The unit also is a short walk from the riverfront trail that extends all the way to Point State Park. 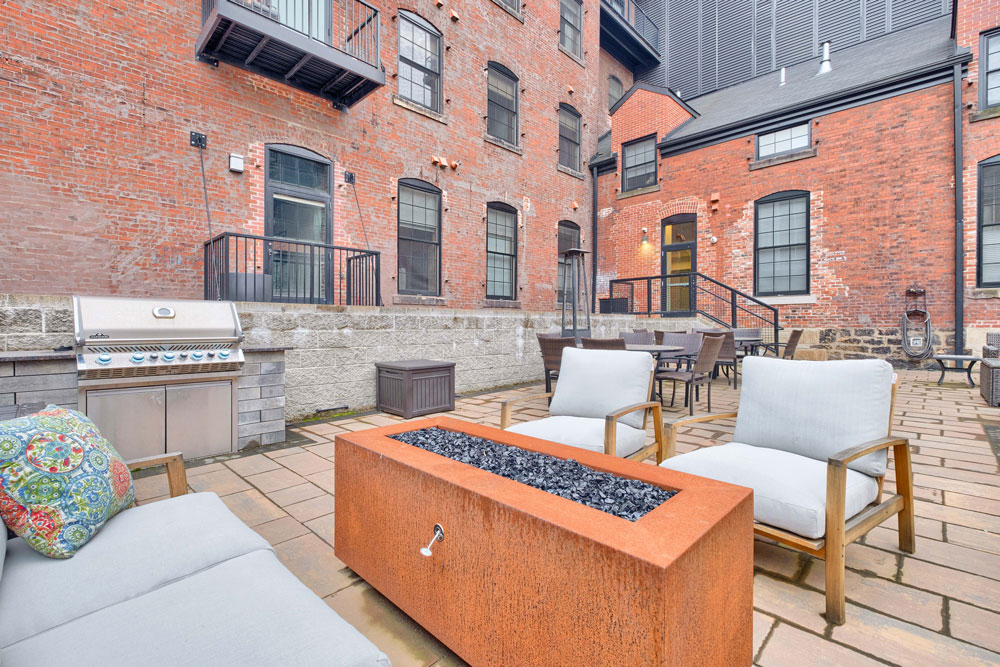 The couple says the one-time industrial neighborhood, which has undergone a housing boom in recent years as many warehouses were converted into high-end living spaces, has changed a lot from when they moved there five years ago.

“A lot of young professionals look like they are staying,” Karri says. “We see a lot of baby carriages, strollers and kids learning to ride bikes.”

About: The Strip District

Neighborhood: A major building boom has brought lots of new development to the Strip District. Among them are the recently completed Terminal Project, which is breathing new life into Smallman Street with a diverse offering of businesses, restaurants, microbreweries, beauty services and fitness studios.