Unwind from the grueling, grating election cycle, and give America some love at the Fort Pitt Museum this weekend. 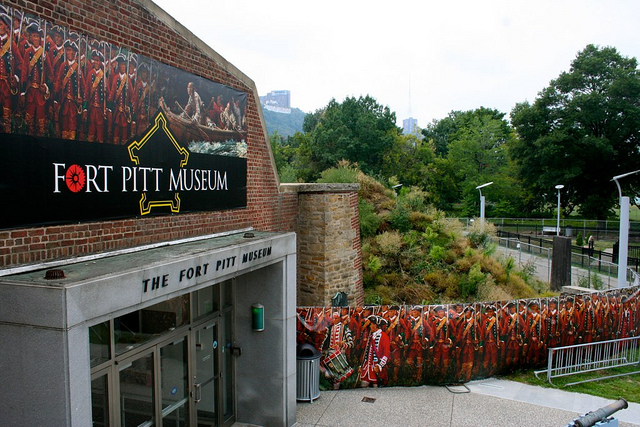 After a deafening season of political ads and dangerously high levels of creeping punditry, the 2012 elections are blissfully behind us. Some are thrilled and others are dismayed, but at least our commercials are back in the hands of car dealerships and grocery stores. Whatever side of the political aisle you prefer, it might be a good time to nurture your love of country and city once again — and there’s no better place than the Fort Pitt Museum.

In honor of Veteran’s Day, the Fort Pitt Museum — which includes the oldest-standing building west of the Allegheny Mountains — is admitting active-duty and retired service men and women for free this Saturday and Sunday. See re-enactors, take tours and drop off a needed item or two for men and women currently serving abroad; it’s a great way to connect with American history, as well as find the spot where Pittsburgh was born. Not a veteran? No problem — general admission is just $5.

Think back. Past the elections. Past Halloween. Past Steelers season. Past the Pirates’ collapse. No, not to The Avengers — you’ve gone too far. Yeah, right about there. Anything come to mind? No, not The Dark Knight Rises. Big to-do in England? Lots of athletes? Incomprehensible hubbub in a stadium? Yes, though our lightning-quick national consciousness has jumped on to the next big thing several times, the 2012 Summer Olympics were mere months ago. And while some may have forgotten, there are others — like myself — who are still suffering the long-term effects of athletic withdrawal. Fortunately, I’ve found a quartet of Olympic-style events coming in December. Check out After Dark for the details!

Don’t miss the opportunity to revel in some of the pride and nuances of Pittsburgh, pulled directly from more than 100 South Side resident interviews. While Nov. 16 marks opening night for Tami Dixon’s world premiere of South Side Stories, you can catch previews this Saturday at 5:30 p.m. or Sunday at 7 p.m at — where else — South Side’s City Theatre. Directed by Matt Morrow, witness Dixon characterize the South Side and all its glory with her movements and tales (parking chairs included). Long-term (and newfound) South Siders take heart: Discounts are available for groups and audiences younger than 30 or older than 62. The show’s full schedule is available on the CT website.

In Theaters: New films coming to Pittsburgh this weekend are headlined by Skyfall, the third film in the James Bond series to feature Daniel Craig in the title role, and first since 2008. Meanwhile, though, the Three Rivers Film Fest soldiers on into its second weekend, including such highlights as the dark and peculiar The Comedy, the acclaimed coming-of-age tale Clandestine Childhood, and the infamous thriller Wake in Fright. PM Film Editor Sean Collier is taking the week off from his duties at WDVE; he was focusing on the film festival last week, so he needs to catch up on the likes of Skyfall, Flight and Wreck-It Ralph. Get out to the film fest!