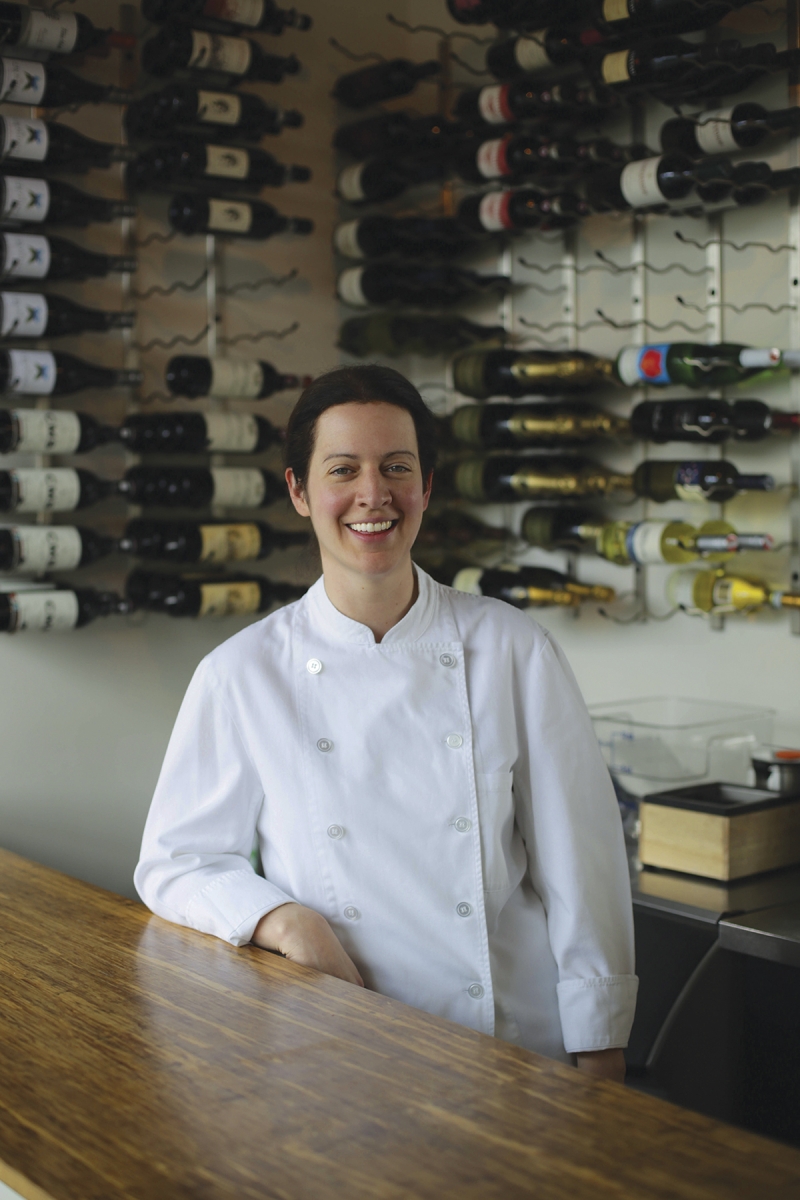 The open kitchen at Dinette, Sonja J Finn’s cozy East Liberty restaurant, radiates focused, energetic warmth. That energy is a reflection of Finn’s leadership philosophy, which she says is based on making the most streamlined and productive kitchen possible.

“I don’t think anyone should be yelling in a kitchen. But that also means you have to hire the right people. You have to have people who respect the customers, respect the process and respect the food,” says Finn, 36.

Her menu is a reflection of that culinary philosophy. Ingredients should be fresh, seasonal and not at all fussy. “I don’t want there to be a moment where people try to figure out what their food is,” she says.

Finn’s respect for people and food translates to the plate, where seasonal dishes such as srpska salata (Serbian summer salad of tomatoes, hot peppers, onions and feta) are a straightforward celebration of ingredients, and the simple beauty of a pizza crust is elevated by combinations such as the Pennsylvania sweet onion with sun gold tomatoes, Brie, rosemary, sage and fresh mozzarella.

Aside from the pastries, there aren’t hard-and-fast recipes for any of the dishes. This, Finn says, largely is because the subtleties of an ingredient’s flavor change through the year.

Finn opened Dinette in 2008, when old Pittsburgh stalwarts such as Le Pommier were on their last legs. Her leadership helped to pioneer the city’s transition from white-tablecloth dining to meals in comfortable spaces cooked by chefs who focus on quality of ingredient above anything else.

Early on, sourcing was a challenge for Finn, who after graduating in 2003 from the Culinary Institute of America developed her skills in Northern California restaurants. “I didn’t understand how food could be so far from the source that there would be a rotten potato in the sack. And then when we got our first order here, half of the onions were bad,” she says.

At times, she even had to bypass the traditional restaurant supply chain and get the best produce she could find wherever she could get it. “I decided I’d rather get my ingredients at Whole Foods than settle for bad produce,” she says.

Now Finn for the first time is about to move on to her next endeavor: running a restaurant inside the Carnegie Museums in Oakland. She used to take her son Miles to the museums every week, and as part of the experience, they’d have lunch in the café. “I’d sit there and think about how amazing the space is and if only I could have my food here. I could feel it in my bones that this was something that was meant to be,” she says.

This traditional Serbian (my mother is from Serbia) roasted spicy red-pepper spread is a favorite of everyone in my family. Red Serbian peppers work best, but unless your father smuggled seeds into the United States 40 years ago, your best substitute is red banana peppers.

Directions: Grill peppers until skins start to blister. Put peppers into a bowl, wrap tight with plastic wrap and allow the peppers to steam for at least an hour. Remove skins, stems and seeds. (Wear disposable gloves.) Transfer peppers into a colander and toss with a little salt. Let peppers drain at least overnight in the fridge. Pulse peppers in food processor until chopped finely, but do not purée. In a large sauté pan, add oil and peppers. Continuously stir over medium heat to both evaporate some water and fully incorporate the peppers and oil (about eight minutes). Adjust salt to taste. Let cool before serving.