With the parade falling on the holiday itself, there's no better time to pretend you're Irish for a weekend. 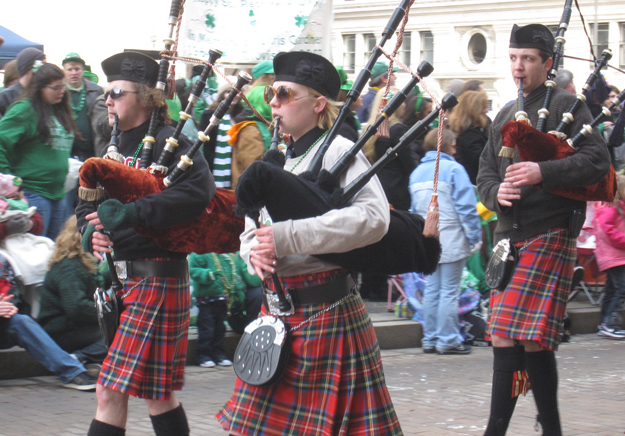 When Irish eyes are smiling
Pittsburgh’s annual St. Patrick’s Day Parade, estimated to be one of the largest in the United States, claims a tradition dating back to the 1800s; after all, Pittsburgh has been very Irish for a long time. This year, with the parade day falling on the holiday itself (a rare occurrence), some 23,000 are expected to march, from bands and floats to policemen and firetrucks — plus, young Mary Kate Gallagher of McKees Rocks, who is the 2012 Miss Smiling Irish Eyes. (Perhaps she won by virtue of having the most Irish name in town?)

After the parade comes to a close, the festivities continue in Market Square with the second-annual Irish Fair in the Square celebration. Music will be provided by the likes of Celtic Shores, the River City Brass Band, the McDonald Pipe Band and more, and you’ve got all the culinary (and, ahem, liquid) comforts of Market Square to keep the party going. Head down early and come up with a foolproof parking plan — the parade committee expects a crowd of 150,000 or more! The parade will set off from the Greyhound Station at Liberty and Eleventh, down Grant Street to the Boulevard of the Allies and turn right (toward The Point) before finishing at Boulevard and Stanwix.

How to drink like a true Irishman
Somewhere in the latter half of my undergraduate career, I spent a semester in Galway on Ireland’s West Coast. I assume that I actually took classes during this sojourn, though it’s tough to recall any particular knowledge gained amidst a fog of dark beer and rainy days. I did, however, learn a thing or two about drinking like a real Irishman. So if you’d like to spend your St. Patty’s Day weekend drinking the traditional way, follow the simple rules listed in this week’s edition of After Dark!

Steel City thinks you can dance
If you’ve ever sat on the couch thinking you could foxtrot and tango better than the hapless celebs — or even Hines himself — it’s time to check out the annual Steel City Classic, a ballroom competition designed to let talented amateurs strut their stuff. Registration for this year’s competition — Friday and Saturday at St. Nicholas Church on Dithridge Street — has closed, but grab your tickets and cheer on some fleet-footed locals (and size up your potential competition for next year). And don’t miss a performance from International Latin Dance Champs Nazar Norov and Irina Kudryashova tomorrow night!

In Theaters This Weekend: New movies coming to Pittsburgh this weekend include: the ’80s TV sensation-turned-buddy comedy 21 Jump Street, with Jonah Hill; Jason Segel and Ed Helms in the indie comedy Jeff, Who Lives at Home; the conspicuously under-marketed Being Flynn, with Robert De Niro; and a documentary look at the extravagant Parisian burlesque club known as Crazy Horse. PM Film Editor Sean Collier will appear on the 102.5 WDVE Morning Show Friday at 7:15 a.m. to review 21 Jump Street and Jeff, Who Lives at Home; he’s eager for a direct showdown between quiet comedy and very, very loud comedy. Listen to Sean’s reviews tomorrow at 102.5-FM or on DVE.com.

This weekend, Pittsburgh native Elizabeth Hoover takes the stage at the Carnegie Library Sunday Poetry & Reading Series. Hoover is a poet, critic and journalist whose work has been featured in The Paris Review, The Los Angeles Times and Carnegie Magazine. Click here for more.