‘Don’t Call her Cathy’: The Cathedral of Learning’s Popular — but Controversial — Nickname

Pitt students have a term of endearment for the Cathedral — but not everyone loves it. 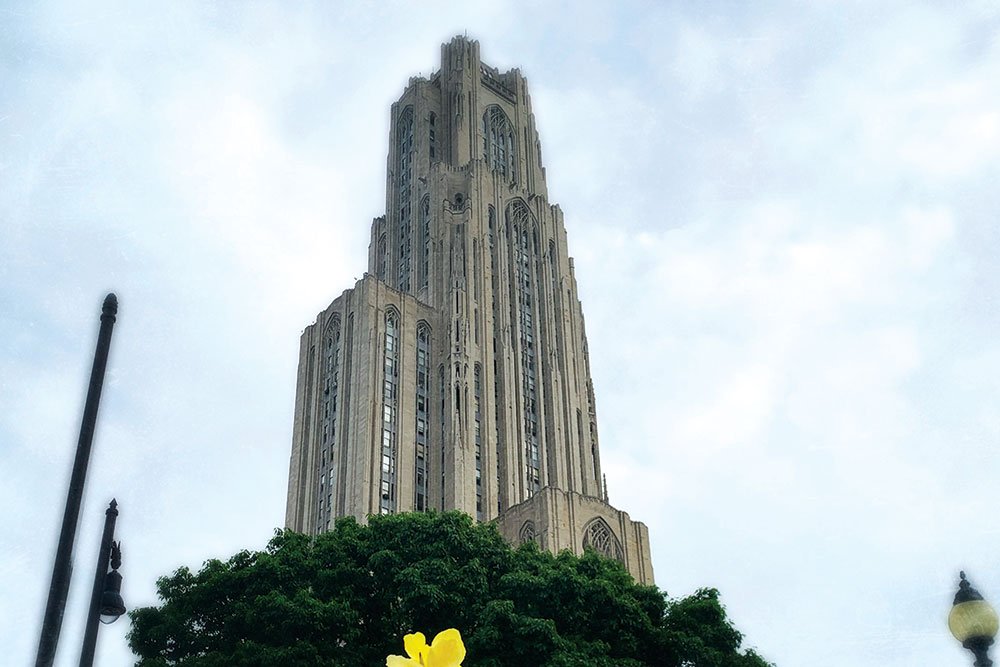 To call her the Cathedral or Cathy? That is the question still polarizing University of Pittsburgh students and alumni nearly a decade after the Cathedral of Learning in Oakland, known as the tallest educational building in the Western Hemisphere, developed a new nickname.

There wasn’t a definitive moment when the Cathedral became Cathy, but the first appearance of the nickname on the Pitt subreddit, an unofficial online forum for the Pitt community which began in 2010, was in April 2012. Harry Kloman, an English professor who has taught at Pitt since 1988, says it is a recent development that he exclusively hears among students.

“I honestly can’t remember [when ‘Cathy’ started], but it wasn’t way, way back — perhaps in the past decade or so,” Kloman says. “And I only ever heard it from my students at The Pitt News, where I’m the news adviser.”

Walking through Pitt’s campus, you’re more likely to hear students call the building Cathy than the Cathedral of Learning, or even other nicknames like the Cathedral or the CL.

The name has even spread to the administration. A University of Pittsburgh Facebook post referring to the Cathedral as Cathy inspired over 300 comments in February 2021, and while some commenters said they didn’t really care what the building was called, others were much more passionate.

“There are those that respect beauty and history and those who don’t,” Facebook user Jordan Thomas wrote. “To trivialize the historical and architectural significance of THE CATHEDRAL by coming up with some ‘hip’ colloquialism is a slap in the face to everyone who holds that building in the high regard of an internationally venerated academic building. It’s disgusting.”

People are so passionate about the subject that they have made T-shirts announcing their objection to the Cathy nickname and sold them online. Meanwhile, pro-Cathy advocates started a petition in May 2021 to change the Cathedral’s official name — though it hasn’t gained much steam.

The nickname is so prevalent among Pitt students that some say they had no idea there was even debate about it — like Orion Bachrach, a sophomore who calls the argument “silly.”

“I wasn’t even aware that people were against the nickname,” Bachrach says. “It seems a little silly to me.”

Much of the anti-Cathy crowd is made up of Pitt alumni who had long left the University before the nickname gained popularity — like Corey Culton, who attended Pitt from 1994 to 1997 and now lives in Bloomfield and works for First National Bank of Pennsylvania.

“I feel like it’s disrespectful,” Culton says. “She’s a proud strong symbol and shortening her name diminishes her. She deserves reverence and respect. And I feel calling her Cathy doesn’t provide that.”

Though students like Bachrach might find the Cathy debate trivial, Culton says he will continue to speak loudly and proudly against the nickname. He even bought a t-shirt online in 2017 to publicize the cause.

“I accept my ‘old man shaking his hand at a cloud’ status on this issue and have and will continue to wear my ‘Don’t call her Cathy’ T-shirt,” Culton says.

Those who use the nickname say it’s because it’s easier to say than the full name — and also because it’s “kind of cute,” as Bachrach puts it. Ashlynn Donadio, in her first year at Pitt Law and her fifth year at the university overall, says she has been saying Cathy since she was a freshman.

“I tend to use it a lot,” Donadio says. “It’s a lot faster and less clunkier than saying ‘the Cathedral of Learning’ when talking to someone who will know what you’re talking about.”

Most people who call the building Cathy are students, but not all students are fond of the nickname. Aeriana Olds, a first-year student who says she heard the name from a tour guide before she even started at Pitt, says she doesn’t follow the trend.

“I don’t like calling it Cathy,” Olds says. “Naming stuff in general, it’s just weird to me. I don’t like it. It makes me cringe, honestly.”

Unlike Olds, Culton says his issue with nicknaming Pitt buildings starts and ends with Cathy.

“I have no issue with calling the Petersen Events Center The Pete, or from my time call[ing] Fitzgerald Field House The Fitz,” Culton says.

Amid all the controversy and debate surrounding Cathy, Kloman says he generally feels indifferent about it.

“I have no feelings about it,” Kloman says. “I suppose it made me smile when I first heard it. But now, it just seems like a cliché, so perhaps I roll my eyes internally. But, really, no feelings. Perhaps it’s time to lighten up a little and just call her Cate.”