From academia to invention: What’s up (with) Dok. 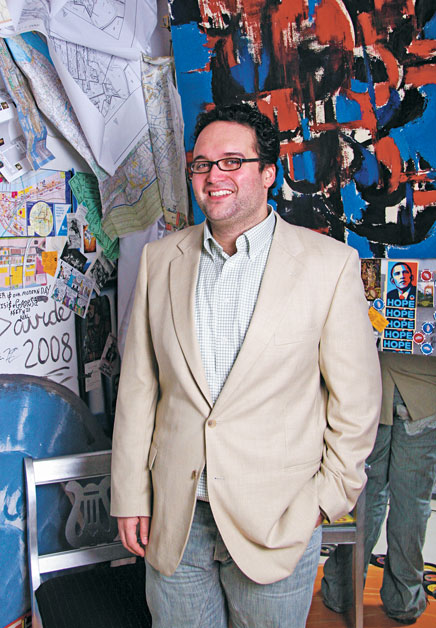 Since reaching his last year as a 20-something, Dok Harris already has worn the title of inventor, broadcast personality and entrepreneur, while earning as many degrees as … well … a real doc. All this from a kid who was scampering around signing autographs by the age of 3, taking cues from the 230-pound running-back legend he called “Daddy.”

Franco Dokmanovich Harris, son of former Steeler and Pro Football Hall of Famer Franco Harris, who now owns the healthy bakery-product company Super Bakery, has gone by “Dok” since his days growing up on West North Avenue in the Mexican War Streets neighborhood and just a stone’s throw away from Three Rivers Stadium. But Dok Harris, who still lives in the North Side, opted for the off-the-field spotlight, because even if Sewickley Academy (his alma mater) had actually had a football team, his mother, Dana Dokmanovich, wasn’t about to let her only child enter the tackling world of shoulder pads and cleats.

Harris went on to Princeton University as an undergraduate to major in politics, then to University of Pittsburgh School of Law and to Carnegie Mellon University for his M.B.A. In between classes at Princeton, he enjoyed being somewhat of a campus celeb, hosting shows on Princeton’s TV station along with some quirky acting gigs.
In addition to a talent for entertaining, Harris had an eye for invention. He teamed up with some Pittsburgh neurosurgeons during his second year at CMU to create NeuroLife Noninvasive Solutions, a device that measures brain pressure. His business knowledge helped him win the Global Moot Corp. Competition in 2006. Part of the winning prize included an opportunity to ring the opening bell of the NASDAQ, a memorable experience he described as a “Disneyland for execs.”

Harris has continued to work in creation design with his Shadyside-based start-up company, SimpleMem Technologies. Mem stands for memory, and no, not to be confused as Simple Men, the national improvisational comedy group, which Dok calls “a whole other bag of worms.” Among its projects, the team at SimpleMem is working on SureFind, a little gadget attached to your keys that remembers where you park. Press a button and watch the lights indicate if you’re headed in the right direction.

These days, you’re likely to find Harris stirring up new ideas in cities from Denver to London. Even as a Blackberry-glued-to-his-hand entrepreneur with an affinity for the airport runway, he manages to find the Steelers-themed bars tucked away in cities far from Allegheny County. But Harris admits it’s not quite the same as home.

PM: Pittsburgh born and bred: Do you actually use Pittsburghese?
No “yinz” or “n’at,” but I do use a “buggy” at the supermarket.

PM: Where would you like to see yourself in five years?
Ideally running a law firm that would mentor new entrepreneurs, helping creative people get their businesses off the ground here in Pittsburgh.

PM: What’s your favorite thing about Pittsburgh?
I feel I know this city so well, but find things that surprise me every day: a new restaurant, a bookstore, a place with great milkshakes that I walked by for years and never realized existed.

PM: An invention you’d love to see materialize?
Just a way to find my glasses in the morning. I guess I had better get to work on that one, eh?

PM: Worst job ever?
Security guard at Princeton football games, which meant being at the stadium at 10 a.m. on Saturday. I lasted two games.

PM: It’s Friday night: Where are you?
Probably at the airport, heading out of town for the weekend.

PM: Any splurges lately?
Most of the fun budget has recently gone toward travel.

PM: What’s on your iPod?
It’s like a pretty sweet frat party from 10 years ago: Notorious B.I.G. and Ice Cube to Kenny Loggins and Whitesnake.

PM: How many times have you watched footage of the Immaculate Reception?
Probably a few times less than John Madden, and certainly with a much bigger appreciation for the ending.

PM: With whom would you have dinner if given the chance?
Richard Branson, Lee Iacocca, Margaret Thatcher, Anthony Kennedy. Oh, and Bruce Campbell.

PM: Definition of success?
While a happy and healthy family, thriving community and being a mentor are all great—big, fancy toys and having buildings named after you sure can’t hurt.

PM: Famous last words?
Life’s all about waking up, putting both feet on the ground and getting things done. With that said, take the time to enjoy it.

This article appears in the January 2009 issue of Pittsburgh Magazine.