Despite The Rock, Rampage Is a Wild Misfire

A review of "Rampage," plus an update on the former Friends of the Hollywood Theater and other local movie news. 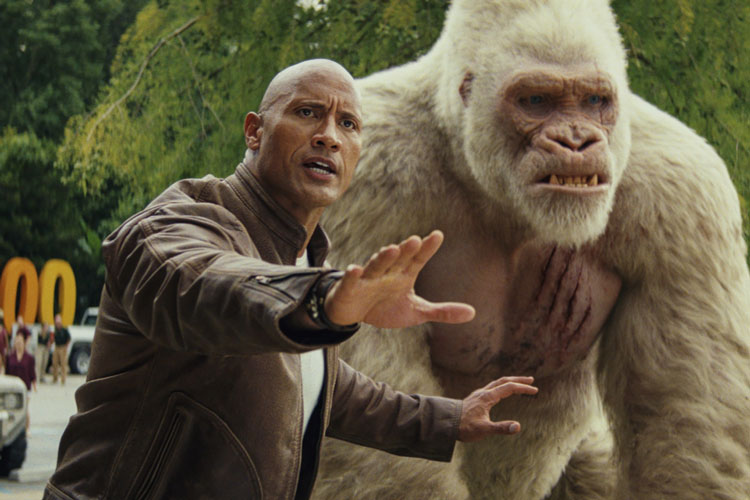 Well, this was a bad idea.

It started with the notion of adapting “Rampage,” the arcade franchise based exclusively around monsters climbing, and punching, skyscrapers into a movie. To say that there’s not much of a plot there is, obviously, an understatement. And — to state the obvious — urban civic destruction is a bit out of vogue, cinematically.

Then, somewhere down the line, someone decided to make the film a semi-serious affair, with a dire tone and real stakes. “Rampage” imitates “Jurassic World” at every available turn (the chief villain, a corporate baddie played by Malin Akerman, is a Halloween-costume version of Bryce Dallas Howard’s character from “Jurassic World”), including expecting actual concern for woefully underwritten characters and real investment in the film’s climax.

Someone thought a film about a gargantuan gorilla fighting a massive flying wolf, while The Rock fires a grenade launcher, was a time for dire reality.

The only good move in the development of “Rampage” was the casting of Dwayne Johnson, who is charismatic enough to carry just about any project to tolerability. That’s the case here, even if the film’s quartet of screenwriters (let’s give them undue dignity by not naming them) couldn’t come close to writing him an appropriate character; he self-describes as an awkward, people-averse animal lover, even as he’s quipping and taking charge like it’s the main event of Summerslam.

There are talented actors around The Rock, from time to time, but all are woefully miscast. The script never makes a lick of sense, from the opening sequence — in outer space! — straight through to the joking-amongst-destruction conclusion. It’s a mess. It’s an utter mess.

Yet: Big monsters rollicking around is one of those cinematic keystones that you can’t screw up, even if you try really hard (and try they did). Just as Johnson will always be charming, big beasts gone amok will always be at least passingly interesting. So “Rampage” is definitely a bad movie, yes. But, if for some reason you end up seeing it, you’ll get through it.

The dust has, apparently, settled on the bizarre and contentious sale of Dormont’s Hollywood Theater. The historic building remains up and running under the purview of the Theatre Historical Society of America, which has shifted the theater’s focus to mainstream fare — “Isle of Dogs” is playing currently, and “Avengers: Infinity War” will open on April 27 — while maintaining some legacy programming.

Meanwhile, the nonprofit organization formerly called the Friends of the Hollywood Theater, who ran the venue until the sale, has rebranded, this week announcing a new name — Jump Cut Theater — and mission, to bring eclectic film programming to a variety of venues throughout the region, particularly in neighborhoods without a movie theater.

The first confirmed events from Jump Cut are a trio of Breakfast and a Movie mornings, to be held at the Andrew Carnegie Free Library and Music Hall in Carnegie: “Robin Hood,” with Errol Flynn, on April 15; “Rear Window” on May 27; and the original “Ocean’s 11” on June 17. (The Hollywood is also maintaining the Sunday-morning tradition; their next scheduled revival is “Singin’ in the Rain” on May 12 and 13.)

Jump Cut Theater also promises they’ll be reviving the “Noir Night Out” series and continuing to schedule their annual “Twin Peaks” and “Purple Rain” parties. Other partner theaters listed on their website include the Regent Square Theater and Carnegie Stage.

A statement has also appeared on the old Hollywood webpage, stating, “Both organizations are moving forward, and all claims or disputes between the two organizations have been resolved amicably. We wish each other well as we pursue our respective endeavors.”

The Montage: The Tull Family Theater in Sewickley will be inviting actual, non-animated dogs to the theater for showings of “Isle of Dogs” this Friday and Saturday. The adoptable pooches from Animal Friends will welcome guests in the theater’s lobby; they’re also running a Most Photogenic Dog contest on Facebook and Twitter through the end of Sunday. Winner gets a free night at the movies … The Pittsburgh Japanese Film Festival rolls on this week at Row House Cinema, with special events including a live-action “Sailor Moon” musical (tonight) and the closing-night film, the garage-rock action spectacular “Wild Zero,” which is making its Pittsburgh premiere … “Back to the Future” returns to the big screen this Sunday night at Phoenix Cinemas in Bridgeville … the neo-noir animated film “Have a Nice Day,” a landmark in the advancement of Chinese animation, continues through Thursday at the Harris.