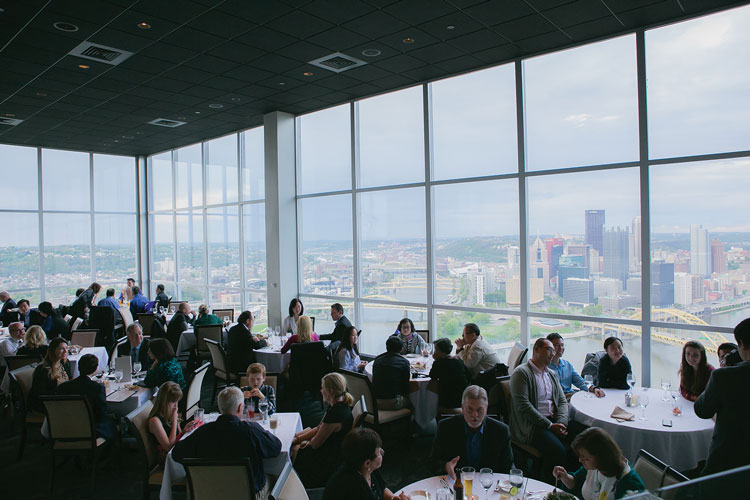 The biggest challenge Moss Architects faced during their redesign of Monterey Bay Fish Grotto wasn’t what to add but how to strip everything away. The end result — a sleek restaurant on Mount Washington, with postcard views of Pittsburgh — impressed our independent Restaurant Review Panel enough that it awarded the 2016 Delicious Design award to Monterey Bay.

“It was … bizarre,” says Andrew Moss, president and founder of Moss Architects, of the previous design of the space, which featured faux palm trees ensconcing the load-bearing posts and various shades of deep sea-blue carpeting and paint. 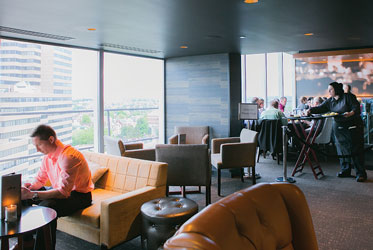 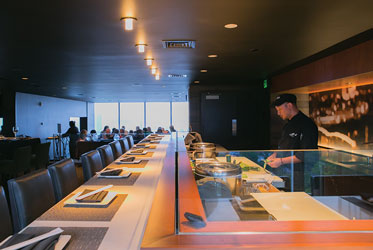 “From a design-strategy point of view, it was a process of trying to simplify and remove things. Our goal was to create a clean, modern dining experience that takes a back seat to the view,” Moss says.

It’s a stunning view. The restaurant isn’t just located atop Mount Washington but crowns a high-rise building on Grandview Avenue. Floor-to-ceiling windows reveal a breathtaking overview of Pittsburgh’s rivers, bridges, buildings and hills. “We felt that every seat should have a view. That wasn’t the case in the old restaurant,” Moss says.

The dining experience begins with a ride in the new glass-windowed elevator, with the city unfolding as the lift moves higher. Guests exit the elevator to a recessed center axis that streamlines and organizes the room before they ascend a small set of stairs to enter a white-tablecloth dining room framed with cherry-wood panels. 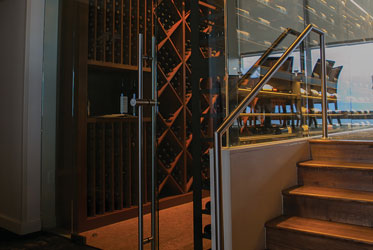 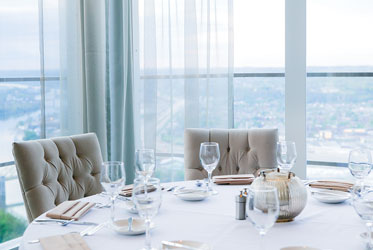 Clear Story handled the restaurant’s new lighting design, which was crafted to create a soft, elegant experience while not distracting from city views by casting unwanted shadows or reflections on the glass windows.

Moss and his team also transformed the space below the main dining room into an elegant cocktail lounge and a sushi bar. The bar’s low ceilings and modernist-influenced furniture are a cozy contrast to the grand elegance of the upstairs room. It’s a perfect place for a quiet drink.

It also was a quick project; the restaurant’s owners asked for an eight-week turnaround in hopes of reopening on Valentine’s Day 2015. The buildout took slightly longer, but by early April patrons once again were enjoying the fish-forward menu — this time with an even more extraordinary view than before. 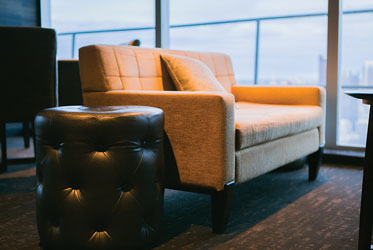 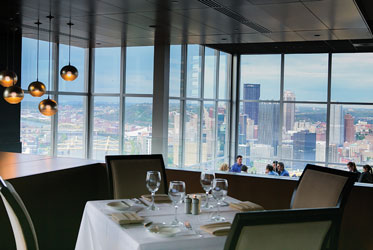