Daytripping: The ‘Eighth Wonder of the World’

Fourteen years ago this month, the mighty Kinzua Viaduct met its match.

Editor's Note: This story was first published in June 2017 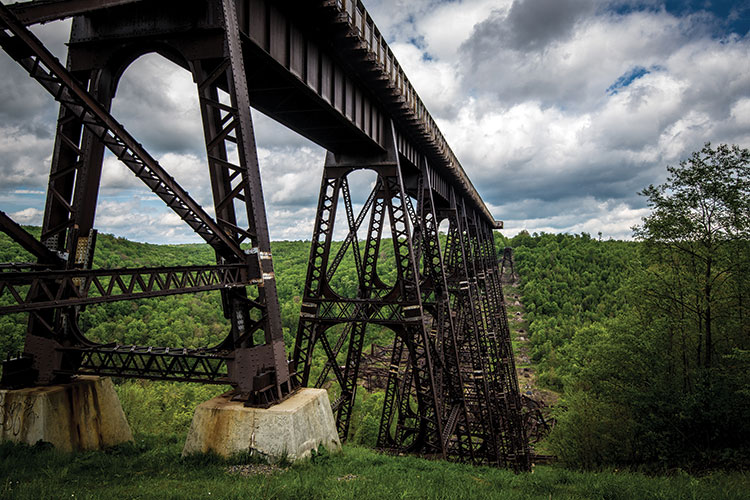 Just outside the eastern tip of the Allegheny National Forest (a few scant miles south of the New York state line), a massive steel bridge almost connects the edges of the mighty Kinzua Gorge — almost.

Once the longest and highest railroad bridge in the world, the Kinzua Viaduct was built to transport coal, oil and lumber across the gorge via the Erie Railroad. Envisioned by Civil War Gen. Thomas Kane, the mustachioed president of the New York, Lake Erie and Western Railroad and Coal Company, and Octave Chanute, the Erie Railroad’s chief engineer, the bridge was a marvel for its day. Constructed with wrought iron in 1882 on thin, insect-like legs, it was billed as the “Eighth Wonder of the World;” it was rebuilt in 1900 with steel to accommodate larger freight loads and the strain of modern rail traffic. 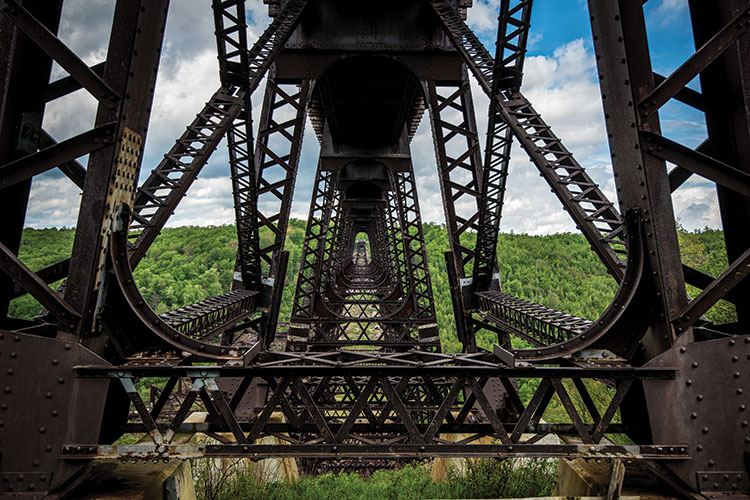 Excursion trains from Buffalo, New York and Pittsburgh made the trip for the thrill of crossing the Kinzua Viaduct, and the passengers must have been made of pretty strong stuff — the bridge soared 301 feet above and 2,053 feet across the forest floor below. High winds coursing through the gorge often would cause the bridge to vibrate, and trains were restricted to speeds of just 5 miles per hour. 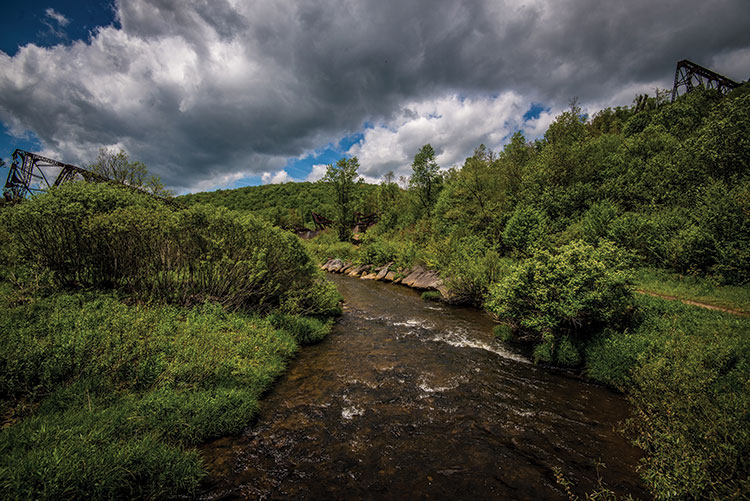 The gorge and surrounding lands were purchased by the Commonwealth of Pennsylvania as a state park in 1963 under Gov. William Scranton; Kinzua Bridge State Park opened in 1970, and the Kinzua Viaduct was placed on the National Register of Historic Places in 1977. 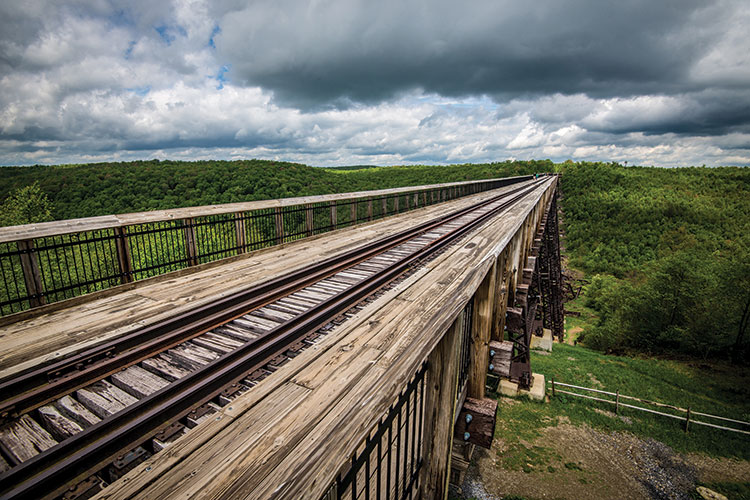 Renovations began in 2003 to convert the span into a pedestrian sightseeing walkway, but disaster struck on July 21, 2003, when a tornado roared through the gorge and ripped the bridge in half. Eleven of the 20 bridge towers collapsed, sending rusted steel beams crashing to the forest floor. Miraculously, there were no deaths or injuries at the site.

Thus was born the idea of the Kinzua Sky Walk, where visitors now can walk the length of the soaring observation deck and view the bridge ruins below and the surrounding gorge. 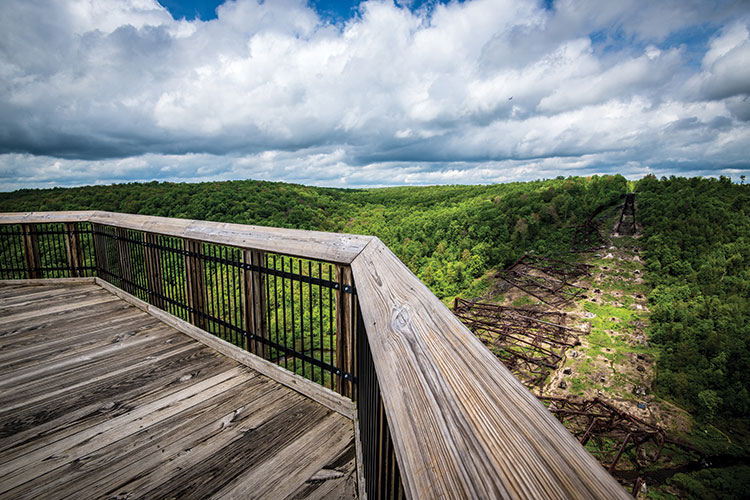 Only at the end of the Sky Walk do you get a sense of the bridge’s former scale and the gorge’s grandeur. (A train ride across the gap is almost unthinkable.) Steep walking trails lead from the beautifully designed Visitors Center down below the former bridge, where you can see the ruins up close and almost hear the steel beams twisting under the wrath of the tornado — almost. 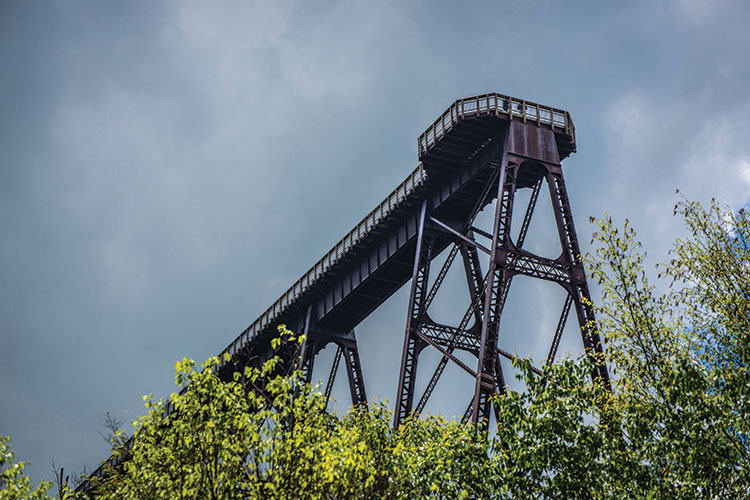 Say It
“Kinzua” — pronounced kinzoo — is a corruption of the Seneca-Iroquois name “Tgehjowa” (tgenh-joh-wawh), which translates to “fish on a spear.” 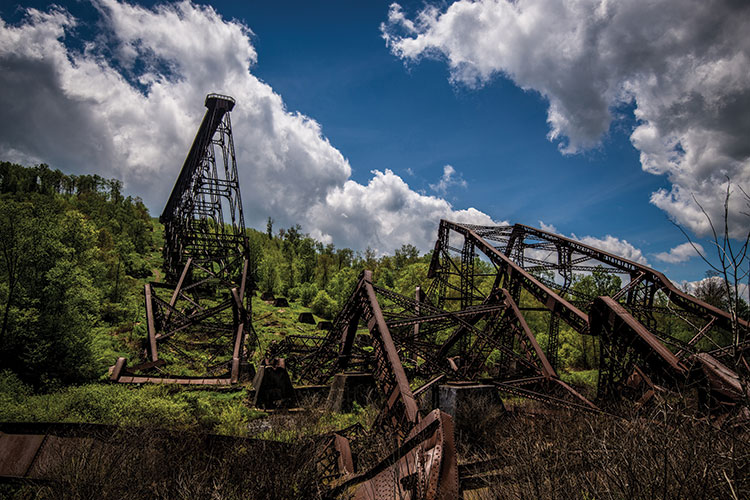 Get Lost
Visit the gift shop to pick up your Pennsylvania Parks & Forests Foundation Passport booklet.
Each state forest welcome center offers its own passport stamp
for visitors.

This article appears in the July 2017 issue of Pittsburgh Magazine.
Categories: From the Magazine, Hot Reads, Things To Do