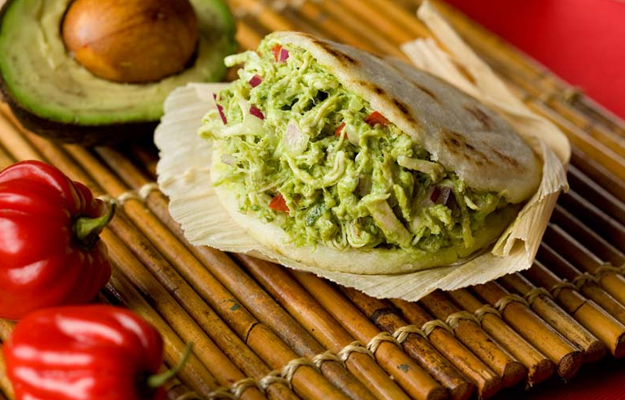 Conflict Kitchen Now Serving Venezuelan Fare
Sure, street food is becoming increasingly popular (after all, it is nice to eat fuss-free food occasionally). But not all takeout windows offer food for thought. Except Conflict Kitchen.

Established in 2010 by John Pena, Jon Rubin and Dawn Weleski, the Kitchen rotates its menu every six months, offering one signature item from a country that the U.S. is currently in conflict with. Previously, the Kitchen offered takeout from Iran and Afghanistan. Now in its third round, Conflict Kitchen is serving a Venezuelan staple: arepa, grilled corn cakes stuffed with various fillings, such as cheese or a mixture of chicken and avocado salad. The creations are served in wrappers that include interviews with Venezuelans about a wide range of topics. For only $5, it's a deal you just can't beat.

The Kitchen will take on Cuba next, so stay tuned for updates regarding the debut.

Start Celebrating Fat Tuesday at Penn Brewery
Known for its delectable German fare and (homemade) hop-filled creations, Penn Brewery is a favorite institution here in the 'Burgh—and for good reason. Where else can you sip the Chocolate Meltdown Stout, a brew that contains chocolate from local favorite Betsy Ann’s? Exactly. Which is precisely why you should head there to celebrate Mardi Gras. Starting at 5:00 tonight (hello, happy hour!), the brewery will offer Cajun and Creole menu specials. On top of that, you can order half-price appetizers, such as the buffalo-chicken pierogies or potato pancakes—plus, $3 beers are available as well. And at 7 p.m., T&A will liven up the place even more with live music. Fantastisch!

Il Pizzaiolo Dishes Out Prime Pies
There are countless run-of-the-mill pizza joints here in the ‘Burgh. Then there’s Il Pizzaiolo, the eatery that quickly (and expertly) wood-fires the pies in its Italian oven. During this frigid month, nothing hits the spot like a slice of the classic Margherita DOC, made with Mozzarella di bufala, San Marzano tomato sauce, fresh basil, Parmigiano-Reggiano and extra virgin olive oil.

This article appears in the February 2012 issue of Eat Street.
Categories: PGHeats