An inclusive pro-wrestling show provides a reminder that living with acceptance and kindness makes for a better environment. 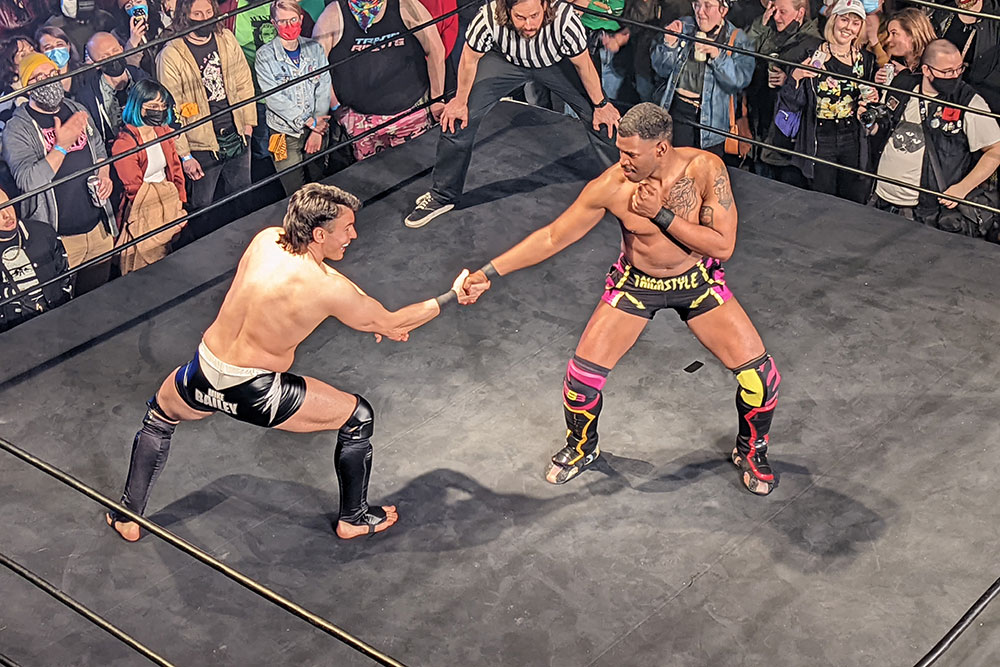 As Pride Month continues, I’ve been thinking a lot about Enjoy Wrestling.

Yes, I’m always thinking about my beloved world of professional wrestling, but there’s a clear link this time. Enjoy, a relatively young promotion based in Pittsburgh, focuses on diversity in its shows — wrestlers who identify as LGBTQ+, in particular (though they have a higher percentage of female and non-white performers than many promotions, as well). To date, Enjoy has only run a handful of shows in front of live crowds; their third is scheduled for July 2 at Mr. Smalls Theater.

I attended the group’s April 9 show, an all-around excellent affair packed with exciting matches. As I waited for the show to begin, though, I was paying attention to the crowd. Pride Month may have been two months away, but the sentiment was on full display among the few hundred fans present; it was a diverse, happy group clearly comfortable with the environment, emboldened to be unabashedly themselves for a night.

Why, I wondered, aren’t there more spaces like this?

We know the answer; it’s the very reason that events like Pride parades are necessary. In too many environments, divergent personalities and varied gender expressions are treated with suspicion, hostility and worse. In this era, when unhinged conspiracy theories about indoctrination and grooming make it to the halls of power, far too many spaces — yes, even many spaces within the supposedly progressive city limits — do not encourage people to come as they are.

Few figures are as over-invoked as Mister Rogers, but I think he applies here: Whatever happened to “Won’t You Be My Neighbor?”

I was raised to believe that, even if I didn’t understand someone, I could still be respectful and decent to them. I do not recall anyone teaching me to treat differences with suspicion; no one in my upbringing encouraged me to be wary of those who lived different lives than my own. Even if we put aside common decency (and why the hell would we do that), I’ve always found that animosity takes much more effort than acceptance. You’ve gotta work hard to hate. Live and let live is a lot easier.

I also know of no religion — including that popular one, with the love-thy-neighbor and the he-without-sin-cast-the-first-stone tenets — that promotes division, condemnation and judgment. It always struck me as odd that so many invoke religion to object to individuals whose lifestyles differ from their own; I’m pretty sure that the general gist of most religions is to accept, embrace and support those around you, regardless of who they happen to be.

Events like Enjoy Wrestling, as well as the many lovely celebrations of Pride that occurred last weekend, demonstrate that a welcoming, tolerant environment is generally much more pleasant than a contentious atmosphere. Occasionally, I’ll find myself at a comedy show in some corner of the region that proves the inverse; I’ll see t-shirts proclaiming distrust of this group or that, hear an emcee score cheap points by mocking an underprivileged group, see flags that absolutely don’t contain all the colors of the rainbow discreetly posted in a corner of the bar. The mood in these rooms is never positive; suspicion and paranoia hang in the air like cigarette smoke.

I try to make it a point never to return when I find myself in a room such as that. What I don’t do, however, is condemn anyone in the moment. I exercise restraint and courtesy, then excuse myself at the earliest opportunity. It’s not hard.

The hope of a society is tolerance, understanding and unity; it often seems a far-off goal. The standard, though, should be decency and respect. You are not obligated to understand something; it is simple, though, to accept it.

Next year, by the way: Can we set up a ring for Enjoy Wrestling on a barge, just off the shore, during Pride? You could suplex people straight into the river. It’d be great.