Pittsburgh is a short drive away from one of only two remaining outposts of the once-ubiquitous record-store chain. 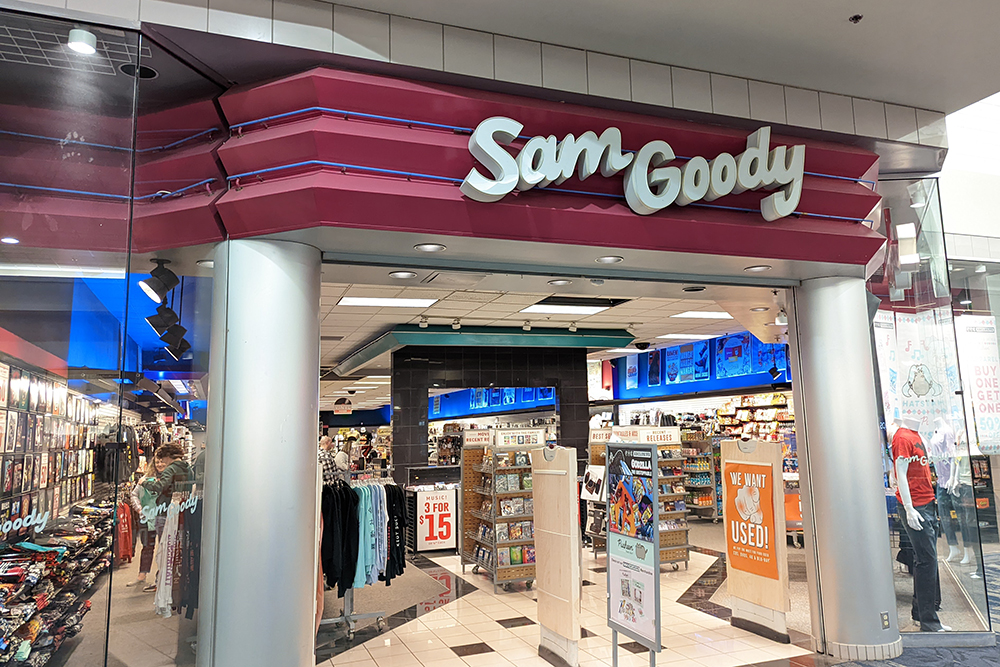 Saturday, I was sitting inside a booth at a mall pizza joint, struggling to get the tight plastic wrap off of a CD I had just purchased.

Had my 14-year-old self glanced through a convenient wormhole at that moment, he would’ve been pleased to see that little (other than hair color) had changed.

That younger version would’ve been mistaken, however, given how long it’s been since I’ve had this particular experience. I can’t be sure of the last time I bought an actual CD; the last one I’m sure of was when Lady Gaga released “Born This Way” in May 2011, and I quickly went to a Best Buy to pick up a copy.

Have I bought a compact disc — not picked up a record, not paid my monthly Spotify bill, but actually bought a real CD — in the 11 years since? I honestly don’t know.

When a friend told me that the nearby Ohio Valley Mall (just on the other side of the West Virginia panhandle in St. Clairsville, Ohio) had one of just two remaining Sam Goody stores, I planned a visit. In my teenage years, this was a chief pastime; getting a ride to a mall or a standalone record store to spend hours rifling through the racks of CDs, looking for a discount on a classic or a curiosity from a favorite band.

Obviously, I was more of a National Record Mart kid — this is Pittsburgh, after all — but an actual Sam Goody, inside an actual mall, promised a heavy dose of nostalgia.

After an easy drive, I strolled through the single-story concourse of the Ohio Valley Mall. It’s a curious one; relatively little real estate is vacant, although some has been given over to other businesses, a solution seized upon by many struggling shopping centers. So a local sheriff’s office, for example, sits two doors down from a Victoria’s Secret. Even within retail, there’s a wide variation; in one hallway, there’s a ragtag shop covered in unkempt piles of collectibles and assorted junk. Next door: Kay Jewelers.

Still, it’s a busy and almost vibrant place. We’ve got some good malls closer to home, but few have the blend of time-wasting diversions, shops at various price points and entertainment (there’s a movie theater and a massive arcade) that I remember from the malls of the ’90s.

After a bit of wandering, I came upon Sam Goody. The facade (seen above) might have been shipped straight from 1987; the fuchsia backdrop, the near-cursive script … perfect.

Inside, however, it was clearly the 21st century. I wouldn’t say clearly 2022, but it was certainly some soupy blend of the last two decades. Yes, there were CDs — even new CDs, some near the front of the store. But there was also a Hot Topic-esque blend of assorted collectibles, T-shirts and accessories from pop-culture properties.

Anime-themed snacks sat a few feet from a three-for-$15 bin of clearance discs. Jumbled racks of used CDs faced a vast expanse of Funko Pops. A pillar of merchandise referencing specific episodes of “The Office” was directly across from a remastered, fifteen-disc, $100 collection of Abbott and Costello’s films for Universal Pictures.

I wanted the Abbott and Costello set, but the price was right on the “Office” stuff. I got a can of Kevin’s Famous Chili mix.

Miraculously, I found something I had actually been looking for almost immediately — a Blu-Ray copy of the 2011 horror film “The Innkeepers,” a movie I had resolved to check out after being so impressed by director Ti West’s latest flick. And yes: I bought a CD, a copy of T. Rex’s “Electric Warrior,” that set me back a mere $6.

I’m not advocating for a total return to palm-sized albums in hard plastic cases; I’m happy with the convenience of digital streaming, and I occasionally pick up some vinyl for a more tactile experience. (I will proselytize for Blu-Ray discs over streaming movies — the quality is so much higher — but that’s another subject.)

Nor had my personal experience, well remembered from the last days of the 20th century. I bought something I was looking for, something that caught my eye and something unnecessary but fun. I took my stuff, got a slice of pizza in the food court and sat down, looking over my purchases.

I miss that. So, as long as this Sam Goody keeps it up, I’ll try to make it at least an annual pilgrimage — an acknowledgement of the inherent joy in a bygone experience.

I probably won’t make it to the other surviving location, though. I’m dedicated, but I’m not driving to Medford, Oregon to get a T. Rex CD.