Collier’s Weekly: As Spring Arrives, Why You Should Hit the Road — By Yourself

Traveling with others is great, but there’s nothing quite like getting out and exploring on your own. 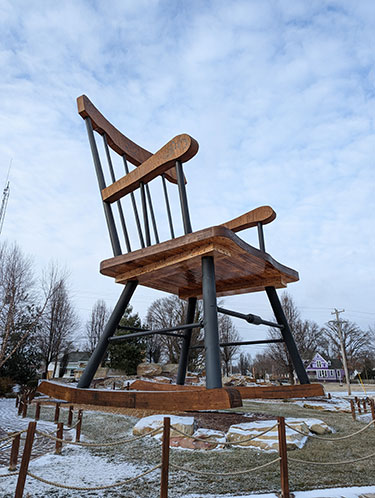 I’m in my late 30s, and I routinely drive across wide swaths of the country to watch professional wrestling.

That wasn’t meant as a confession, but it did feel like one, didn’t it?

I could tell you I never expected to remain so devoted to the unusual art form occasionally referred to as “sports entertainment,” but that’d be a lie. I remember writing in an elementary-school paper that, when I was older, I would gladly travel all over the country to attend WrestleMania each and every year.

I got the event wrong — while I’ve been to WrestleMania, I prefer the Royal Rumble — but otherwise, my youthful prediction was spot on. I first attended the annual show in January 2014 and most recently drove to St. Louis for this year’s edition.

I’ve attended all but two since 2014: One was held without fans during the pandemic, and another took place in Saudi Arabia. (I never seriously considered attending the latter, though I did get as far as looking up the plane fare.)

In addition to enjoying the event, I’ve come to like having a new traveling destination selected for me every year. I’ve made my first journeys to Phoenix, Houston and San Antonio this way, stretching trips out before and after the show to see more of the country. Moreover, though, this has instilled in me a love of traveling alone.

I love traveling with my girlfriend, and I like hitting the road with friends, too. But I reserve the Royal Rumble trips as an opportunity to take a week to myself. The first year, it was a lark; now, it’s a beloved habit. It’s remarkably refreshing to spend an extended period of time doing whatever you want, whenever you want to do it — eating when you’re hungry, going wherever you please, investigating things that catch your fancy and ignoring those that don’t.

Traveling with others has plenty of those elements, but it also involves necessary compromise: Choosing a restaurant, agreeing on a show, navigating whether to extend the evening or head back to the hotel. Those minor irritations are easily overcome. But there’s nothing quite like waking up on your own, knowing that every element of the day ahead will be completed entirely according to your own whims.

On the most recent trip, I stopped in the small town of Casey, Illinois, to inspect the world’s largest rocking chair (pictured above). I spent a good four hours crawling through the bizarre, beautiful City Museum in St. Louis, at one point getting temporarily stuck in a metal tube about eight stories above the ground. On a whim, I diverted to Columbus, Ohio, to check out the immersive-art experience OtherWorld. When I realized that St. Louis isn’t really all that far from Chicago, I spontaneously switched cities in time to see a Bulls game.

Could you map out those activities — or, you know, ones that appeal more to you, and less to my admittedly askew tourism preferences — on a trip with others? Yes, of course. But the joy of traveling alone is in the spontaneity; if you feel like driving to Chicago for a basketball game, you need only check in with yourself. Feel like it? Do it.

Even if you can only get away for a night or two, treating yourself this way is entirely possible. Services such as HotelTonight make finding last-minute accommodations even more affordable than planning in advance; if you wake up on a Saturday morning with free time, you can easily get somewhere, enjoy the weekend and be back in time for work on Monday. (This is made even more possible given the number of cities and charming small towns within driving distance of Pittsburgh.) Only have a day? Take off and spend that day as you would if you were on holiday, then come back home by midnight.

It’s fun — but more than that, it is immensely relaxing. In our day-to-day lives, we are constantly fielding requests and making plans; that’s inevitable, but it’s also exhausting. Spending time accountable only to your own desires is rejuvenating.

Is this a more complicated thing to arrange if you have kids? Absolutely. But if you have kids, you need time to yourself even more. Hell, just go to a hotel and enjoy the silence. It might be the only quiet you experience for 18 years.